After yesterday’s introduction to Kings of War Vanguard, today we’re starting our deep dive into the rules, starting with stat cards.

Not all Warbands and their warriors are equal. They will all have different abilities, strengths and weaknesses. In the game, these are represented by each model having a number of statistics (stats for short), skills, special rules and other game values. Warband stat cards are available as a great reference to use during the game so the details of your warband are easily at hand.

Alongside the stat cards, which come in the faction boosters and faction starters. In the rulebook (HALF PRICE UNTIL OCTOBER 27TH, remember) you’ll find starter faction lists for 14 warbands. There’s also a campaign sheet if you want to write your warband out too.

Anyway, let’s take a look at those cards! Each model in the Warband will have the following stats: 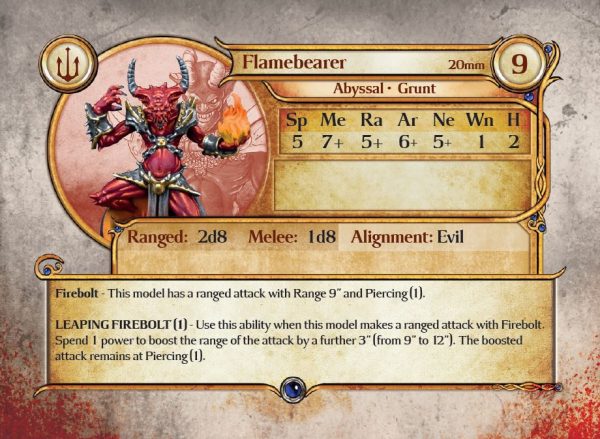 Which faction the model is fighting for. For example, Goblins, Northern Alliance, Basileans, Nightstalkers etc. Your Warband has a single faction, although it is possible to draft in other soldiers, such as Mercenaries.

What race the model is. The model’s Race is also a keyword that may interact with other rules.

Models will be one (or more) of the following classes: GRUNT, WARRIOR, SUPPORT, COMMAND, SPELLCASTER, LARGE. Class is important when building a Warband (as you will see in a future blog). A model’s Class is also a keyword that may interact with other rules.

The height of a model affects how it interacts with other models and terrain for Line of Sight (LOS).

This value shows the distance the model can move in inches. 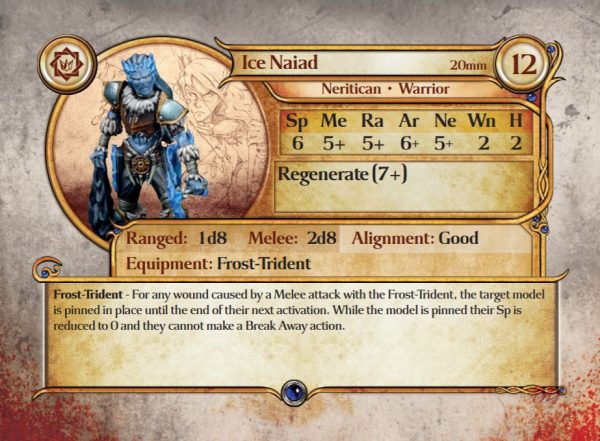 This value is the target number the model needs to roll to hit a target when using a ranged attack, typically as part of a Shoot or Cast action.

This value is the target number the model needs to roll to hit an opponent when making a Melee attack.

This value is the target number a model needs to roll to avoid taking damage and suffering wounds.

This value is the target number for any Nerve tests the model needs to take. This will come into play if the Warband is broken or if something unnerving happens! 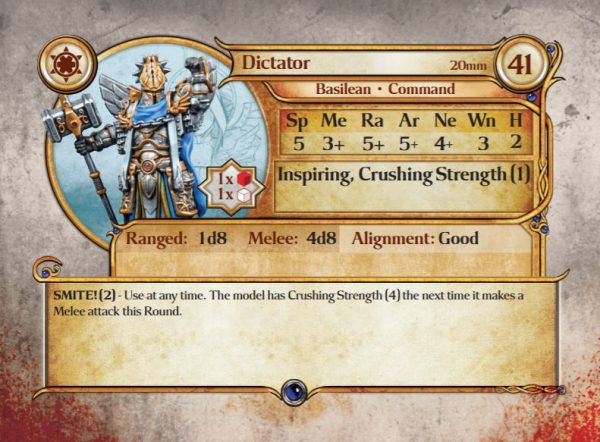 This value shows the number of wounds the model can suffer before it is usually removed from play as a casualty. The larger the number, the more resilient (or stupid!) the model is. Wound counters are used to track how many wounds a model has suffered. They are placed next to the model as each wound is suffered. When a model reaches 0 wounds (or fewer!), it is usually removed from the game as a casualty (too injured to continue…or possibly dead!).

That’s it for the basic stats. Underneath you’ll see special abilities, power dice, etc. We’ll be covering all these in a future blog!

Now you know all the various stats, tomorrow we’re going to run through how to start building your warband. Also, keep checking back to get a sneak peek at the warbands created by Mantic staff.