Hello! And welcome to another sneak peek at our co-operative dungeon crawler, League of Infamy – the game where YOU play the villains. Late pledges are now available over on Gamefound and you can pledge until April 6th. Over the next few days, we’ll be going into more details about how the game plays. Today we’re analysing a Villain Card. In the immortal words of John ‘Ray’ Arnold, “hold onto your butts”* 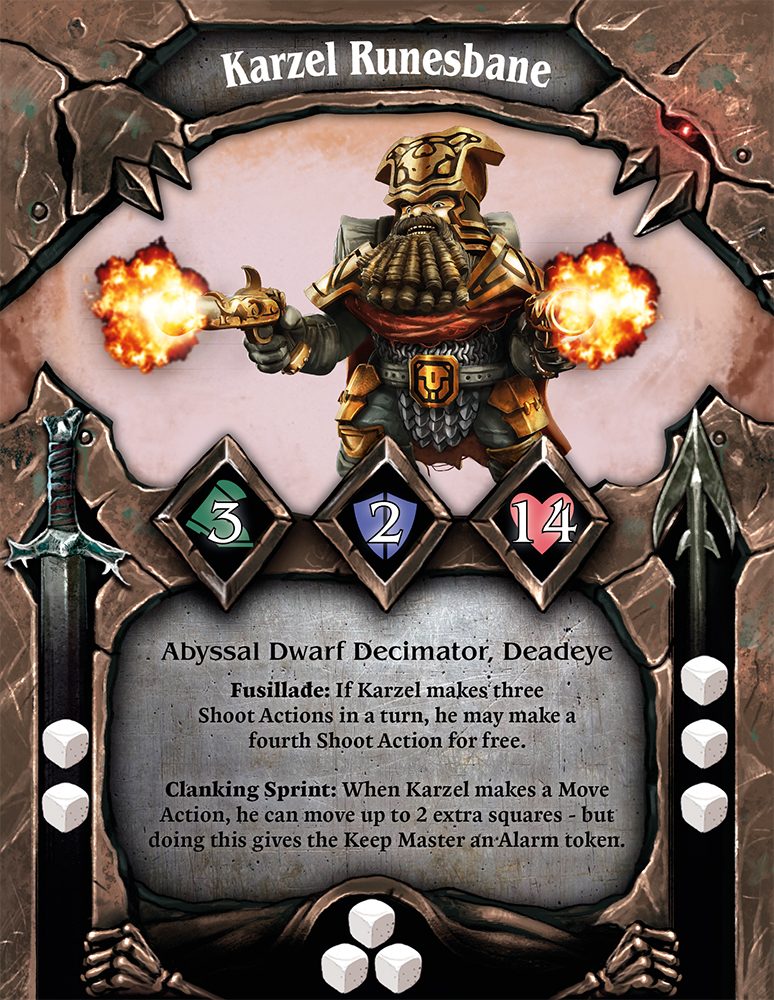 This is the Villain Card for Karzel Runesbane, a greedy Abyssal Dwarf Decimator with a passion for making noise… lots of noise. The Villain Cards will be roughly tarot card sized, so there’s plenty of room for some extra bits and bobs – which we’ll come to a moment.

Here are the main villain stats. The first is how far Karzel can move – in this case Karzel can move three squares. In the middle you’ve got defence – this is the amount of potential damage Karzel can block before he starts taking wounds.  Finally there is health, so Karzel can take 14 wounds before he’s in a spot of bother.

On the left of the card you can find Karzel’s Fight stat. A little like Hellboy, League of Infamy uses a scale of differently coloured dice. White dice are the basic level, orange are slightly better and purple are the best. When fighting, Karzel starts with two white dice, but this can be upgraded with equipment or abilities.

On the right, you’ve got the Shoot stat. This works in exactly the same way as fighting. So, Karzel rolls three white dice as standard when making a ranged attack. Simple!

At the bottom of the card is Karzel’s Skulk stat. Although the Villains may like to go around smashing in doors and noisily shooting elves, sometimes you might want to be a little more cautious. Villains are able to pick locks on unexplored rooms so they can quietly sneak in without alerting the guards. Plus, there may be other events that require you to use your Skulk stats. We’ll leave you to guess how many dice Karzel rolls for skulking.

One of the most important elements of the card is the section listing Karzel’s special abilities, in this case Fusillade and Clanking Sprint. Each of the villains has special abilities that you’ll have to combine in order to successfully complete each mission.

You’ll also see the keyword ‘Deadeye’ above the abilities. During the course of the game you’ll be able to level up your villain with new skills. In the case of Karzel, as well as using Generic cards, he can also learn skills with the Deadeye ability. Stay tuned for more on skills later! What’s more, there may be other elements of the game that use these keywords.

Now, you may be thinking. “A few puny white dice? I’m never going to be able to mercilessly slaughter elves while laughing maniacally.” Well, don’t fret aspiring elf killer because each villain starts with some special equipment. Huzzah!

One of Karzel’s starting cards is the one above. When using the Twin Pistols weapon, Karzel gets to upgrade one of his white dice to an orange dice. Ignore the little purple die in the corner – that’s placeholder for the moment!

Unfortunately, you’ll also generate an alarm token for the Keep Master (something we’ll come to in a later blog). You’ve got to weigh up the decision to create noise or potentially be more likely to take out your target.

Well, hope you enjoyed that rundown of a Villain Card. Come back tomorrow for more insights into the world of League of Infamy.

LEAGUE OF INFAMY LATE PLEDGES ARE AVAILABLE NOW! YOU’VE GOT UNTIL APRIL 6TH TO GET YOUR LATE PLEDGE.