My name is Rob Burman and I have a problem. Specifically I have a problem about making up my mind. When we started talking about the Deadzone summer campaign, my plan was easy. One of the factions I had always wanted to build/paint were the Forge Fathers. Therefore way back in the distant past of May I painted up 150pts of Forge Fathers with wonderful plans to add lots more stunty, heavily armoured fellows. What a great start to the campaign, I foolishly thought. 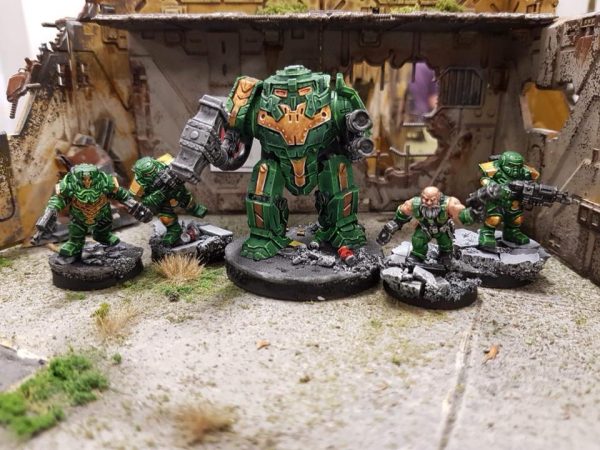 But while doing the Forge Fathers, the Rebs and their myriad alien races started to catch my eye. This was mainly because I loved the idea of the Rebel Cell Leader, introduced in Deadzone: Outbreak. With this new leader you can choose your race, so I immediately liked the idea of a Sphyr captain, leading the Rebs into battle. This meant I ditched the Forge fathers and began to paint a Rebs faction. 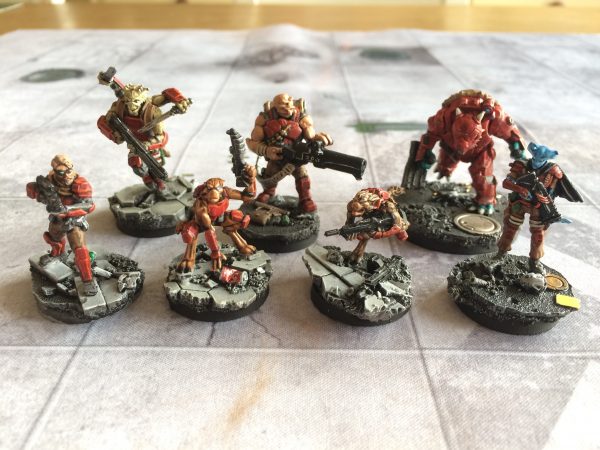 I had a great start to the Rebs. A Sphyr leader, a couple of Yndij troops, a human trooper, Rin with sniper rifle, Grogan and a Teraton Shock Trooper. Lovely. But then the Nameless arrived in the office and, you know, they’re the Nameless. This meant I started painting lots of tentacles and getting excited about Triclinic Shards. Ah…

Unfortunately, all this indecision gave me a bit of a problem – I didn’t have the 200pt strike team I wanted to create for the summer campaign. Oh dear. This meant, there was only one thing to do – it was time to go back to my trusty Marauders. YAY!

To be honest, I never should have strayed from old faithful. Although I painted these a while back, they’re going to be my initial faction for the start of the campaign. One of the good things about the Deadzone campaign though, is that participants won’t be locked to one faction. Once I’ve got my Nameless painted up, I can potentially switch over to them. Anyway, let’s take a look at the Marauders… 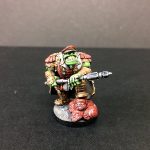 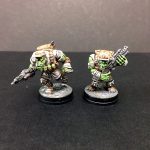 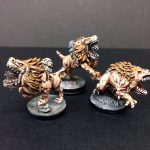 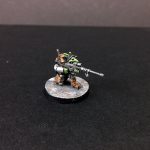 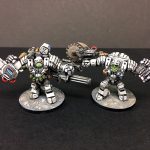 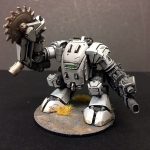 With the colour scheme for these, I wanted something similar to the Enforcers. After all, before the Mandrake Rebellion, corporations hired the Marauders for their grunt work. Therefore, they probably would have kitted them out with the best tech available at the time. But what’s in my 200pts list? Let’s take a closer look…

2 x Marauder Commandos (12pts each) – the Commandos are pretty handy when it comes to shooting (5+) and survive on an impressive (4+). These are the guys that will hopefully be claiming those all-important objectives, while everyone else is kicking ass and taking Nameless.

3 x Mawbeasts (12pts each) – NOM! NOM! NOM! Mawbeasts are an essential part of any Marauder strike team. Able to chomp the enemy on a 4+ and with AP1, these speedy menaces are good for getting in the enemy’s face nice and quick. Potentially even causing problems in deployment zones early in a game.

Goblin Sniper (14pts) – I have a love/hate relationship with the Goblin Sniper. Occasionally my Sniper will perform extremely well and sit in cover while taking pot shots at the enemy. However, with a survive of 7+, if it gets hit, it’s likely to die very quickly. During the campaign, I’ll need to make sure I keep this little guy safely tucked away – hopefully somewhere nice and high on the back lines. The Sniper is good at taking out enemies standing on objectives though, so it should still come in handy. I also gave it AP Ammo for an extra 4pts.

Ripper Rainmaker (27pts) – again, this is an essential unit for any self-respecting Marauder commander. The Rocket Salvo is great for an opening indirect attack on a cube that’s hopefully full of enemies yet to move. Meanwhile, the HEW Beamer with AP3 is a decent anti-Strider weapon. I also gave it Ammo for 2pts.

Ripper Mauler (25pts) – I’ve had mixed results for the Ripper Mauler. Unlike the Mawbeasts, which tend to catch the enemy by surprise. The sight of the Ripper Mauler charging towards an enemy tends to draw a lot of fire, which means it doesn’t rip it up as much as I would hope. Then again, the bonus is that because it becomes a focal point for my opponent, other units can sneak up or claim objectives.

Stuntbot (40pts) – to be honest, the Stuntbot is a completely aesthetic choice because I adore the mini. I bagged this during the original Deadzone Kickstarter and it sat unbuilt and unpainted for a couple of years. Every time I’ve used the Stuntbot so far, it’s been totally useless. However, it does look cool, so that’s the main thing. Now, I realise that we don’t currently produce the Stuntbot, however with our resin now being made in-house, we’re looking at the possibility of bringing back the Stuntbot next year… perhaps even with a couple of new weapon options. Stay tuned, dear reader, and comment below if you’d like to purchase a Stuntbot.

And there you have my Marauder list, ready for the start of the Deadzone summer campaign (which launches on August 20th, remember). To be honest, I’m likely to swap and change a few more times during the course of the campaign… so in a couple of weeks I might do an update showing my shiny new Nameless faction :p

In tomorrow’s blog, Dave will most likely tell a similar story of indecision before highlighting his chosen faction. Can you guess what it is?