My Warband, My Story: Dave’s Basileans 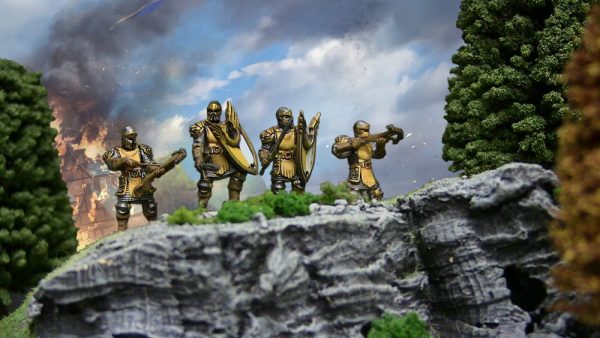 Demitus followed the banner. It billowed in the wind, amid the ash and smoke of the devastation; seemingly untouched.

When the town had come under attack, there had been no time to properly retreat. One moment, all was calm, then next, fire tore through the settlement.  The people had already been evacuated as it had lay in the path of an advancing enemy force, but the garrison of Men-at-Arms had remained.

They had been alerted by Paladins from the Order of the Risen Sun. The handful of soldiers not on patrol had followed the holy warriors through the flames, carrying their regiment’s standard in the hope that anyone still in the town would see it and rally to them.

After what seemed like hours in the flames, they emerged into open fields . A great cloud of dark smoke and ash towered over them. Demitus sunk to his knees and a stole a glance at the warriors around him. A handful of the garrison had escape and all were tired or wounded. The Paladins stood over them, showing no signs of fatigue or injury. He stood up and tried to bring some order to his men.

“We make for the city! They must be warned!” he shouted. There were murmurs of agreement.

“No,” commanded one of the Paladins, “We have a different rendezvous. You and your men are hereby conscripted to our command, by the grace of the Shining Ones.”

So the time has come for another project! Kings of War Vanguard is nearing release and here in the Mantic Bunker, everyone is really excited. For me the most exciting part is that the Basileans are back!

Way back when I started working at Mantic (3 years ago?) there were rumours  and the occasional render of a new Men-at-Arms kit, along with other things. Ever since I came across them I’d promised myself that I’d start a Basilean force, should the new models ever come out.

Now, years later, Vanguard has added a whole bunch of brand new Basilean models and they’re some of the best Mantic has ever made. So when the warband challenge came up, I jump on board instantly for chance to get to grips with the new models.

I’ve approached this from a typically ‘Dave’ fashion: building the models without too much of a thought to uses in game.  I’ve come up with a couple of simple starter lists – 100 and 200 points – based on what models I’d like to paint and my experiences from play testing the game. Here’s a few quick tips for building your first Vanguard faction.

So firstly, here’s my 100 point list. The idea with this one is to have a small faction that just gets models on the table so I can learn to play the game. Although the force building restrictions are lighter at this game size, this still meets all of the rules for building a smaller warband in the rulebook.

This list is basic and simple. A commander, a couple of warriors and a few basic troops. It’s flexible enough to give me some options in game, but it’s not particularly terrifying to face. I have a couple of points to spare, so I might take the Potion of haste of the Veteran Sergeant. This basically make him more mobile and combines with his ability to rally troops to one location to ensure that my tiny force can be in the right place at the right time. It can also be easily built from the Faction Starter – nifty!

For the 200 Point list, I want to build on this and add enough to take an Ogre Palace Guard to the force… because, Ogres in armour! 200 points is great for this as you can only take one Large model for every full 150 points in your force. And seeing as 200pts is the normal size for a game of Vanguard, this is ultimately what I need to aim for.

Remember what I said about using models in threes? This list is built around three groups to do that. The Men-at-Arms are led by the sergeant as a small close combat unit, mainly to capture objectives and aid others in combat. The second group is a hard-hitting strike force made up of the Dictator and two Paladin Defenders. These will be tasked with holding key points on the battlefield and dispatching tough foes. Finally there are three Crossbowmen as a ranged contingent. 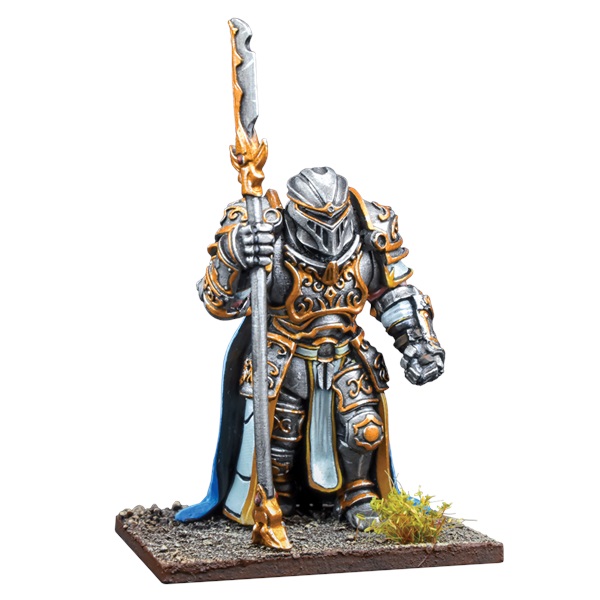 Backing these up is the Ogre Palace Guard. Not only do they look stunning as a model, but they are heavily armoured and hit like a ton of bricks. I’ll want to keep him supported as he fights though, otherwise he will just be overrun by multiple enemies. Finally, there’s the Veteran sergeant, whose ability is really useful in Vanguard, as most of your games will be around capturing objectives. He can plant himself on the objective and Rally the forces around him to move closer when needed. This is all theory, of course, I need to get models painted and on the tabletop to see how it works out.

As you can see, I already have my core troops from the 100 point list painted up and I have some plans involving fancy bases and the like. More on that next time!