My Warband, My Story: Rob’s Forces of the Abyss Part 2 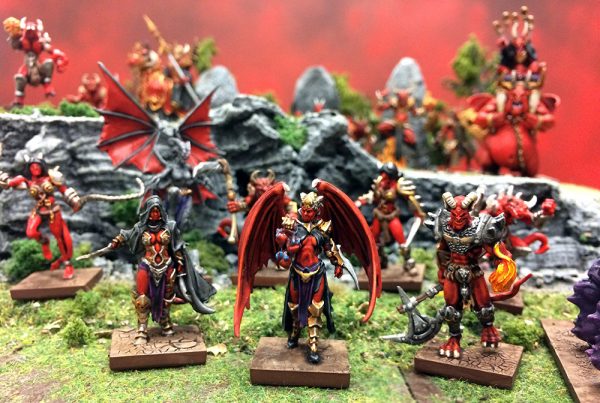 A cruel smile crept across Ma’baya’s face. She could sense the magnificent power of the stones. The air was alive with a crackling energy. Yes, the fight had been brutal, but it was worth it. She glanced towards her Warlock, Kic’hawi. He was stroking the stones as though they were a newborn baby, while reading the runes aloud in a soft, soothing voice. It was a bizarrely tender moment for a creature that revelled in causing agony. Mafu’ta, simply grunted.

Her notoriety was growing and victories like this would only add to her legend. More Abyssals had flocked to her banner… but with each new fighter, there came new risks. The latest to join her ranks was an Abyssal Tormentor, Mate’so. He had previously commanded his own warband, until they were ambushed by a rampaging band of Nightstalkers. Even Ma’baya feared those faceless, brutal horrors. Mate’so craved the thrill of command again and he constantly spread seeds of dissent among her troops.

But she would tolerate him – for now. Her main reason was that Mate’so was accompanied by a Despoiler that was devoted to its master. Memories of watching the Despoiler rip and rend its way through the Dwarfs that had been protecting the stones sent a ripple of wicked excitement through Ma’baya. She would continue to whisper in the ear of the Despoiler until this magnificent beast would be hers alone to command. Then Mate’so would feel the pinch of that blood-soaked claw.

Still, there were others that were slavishly devoted to her too. Her trusted Succubus Lurker, S’wala, had returned from a scouting mission and with her came more Succubi and a Gargoyle they had rescued from being tortured by Orcs. The Gargoyle fawned on Ma’baya as though she had borne the stone beast herself. The creature would do anything to protect her and had already leapt in front of a stray crossbow bolt that would had hit Ma’baya.

Now with the power of the arcane stones behind her, nothing would stop her. Mantica would tremble under the heel of Ma’baya’s Bloody Knives. 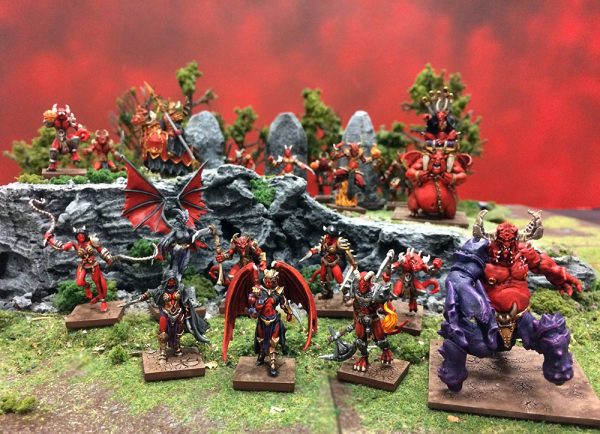 Hello Abyssal fans. It’s Rob here with a quick update on the progress of my Abyssal Warband – Ma’baya’s Bloody Knives. In the last blog I ran through the units I had chosen to create a standard 200 points list that could be used in one-off games. However, if you’ve been keeping up with our series of Vanguard blogs, you’ll know that in a campaign you can create a company of 400 points. Then in campaign games you select 200 points worth of units/equipment from your company before scrapping it out.

With the extra 200 points to play with, this gave me a great opportunity to introduce some of the models I had originally missed out from my original selection. First up, while browsing through the command options, my eye was caught by the Tormentor (Champion). At 44 points, he’s similar in cost to the Seductress but has some ranged capabilities and Crushing Strength (2). As such, I can swap the Tormentor out for the Seductress, depending upon the mission at hand.

Another model that I couldn’t include in my 200pts list was the awesome Despoiler. In a 200pts warband you can only have one Large model and this spot was taken up by the Warlock, which is a Large Spellcaster. However, with Crushing Strength (3) and 4D8 in melee combat, the Despoiler is a force to be reckoned with when it comes to melee combat. 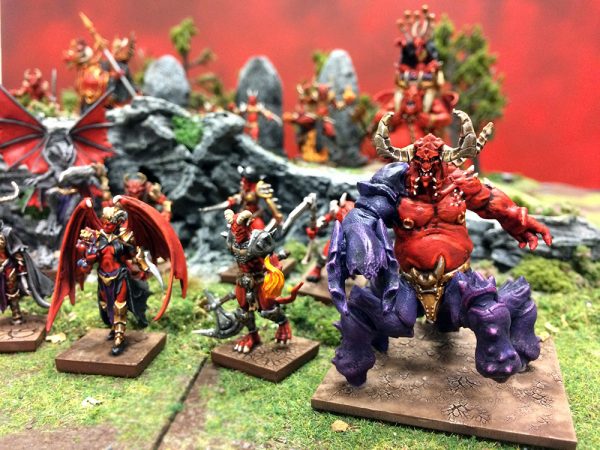 I also felt that my initial list was missing some support options – mainly because I ran out of points! So with the extra wiggle room, I’ve added a Gargoyle (extremely mobile so great for grabbing objectives) and Succubus Lurker (her Scout ability will come in useful for grabbing objectives early in the game).

Finally, I wanted to ensure I had enough Grunts and Warriors to cover all situations, so I added one Lower Abyssal, one Flamebearer and three Succubi to my Company. The Succubi in particular could come in handy for disrupting enemy combat as they’ve got an ability called Fatal Attraction, which means enemy models suffer a -1 on their Melee attacks.

So, let’s have a look at my Company. It’s also worth noting that in a campaign you’ve got access to Unique items. This allowed me to give the Warlock the Ophidian Book of Secrets, which adds 3” to all spells – great for catching my opponent unawares. The below comes to 392 points, so I’ve still got a little room to add some additional equipment:

I can’t wait to use company in our staff campaign, which should be kicking off soon, so stay tuned for updates on how that progresses.