My Warband, My Story: Rob’s Forces of the Abyss 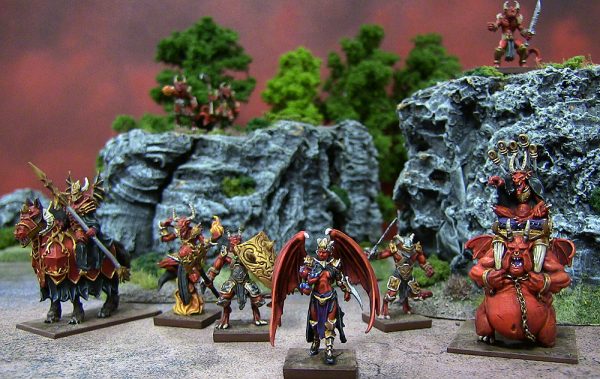 Ma’baya ducked an arrow from the approaching Basileans. They’d have to try harder than that to take her out. She flicked her wings in amusement – a taunt to the Sisterhood frantically reloading her bow. Without warning the Sisterhood erupted into a raging inferno. Her desperate screams were drowned out by a frantic cackling from behind Ma’baya. Kic’hawi, the Warlock, almost fell off his ‘throne’ as he rocked back and forth laughing in a high-pitched squeal. Mafu’ta, his chubby mount, grunted. Ma’baya wasn’t sure if it was amusement or it was simply shifting the weight of his master’s elaborate chair.

Her second in command, Farasi the Hellequin, thundered through the still-smoking remains of the Sisterhood. He charged into a Paladin and rammed his spear through the glittering armour of his foe. Ma’baya knew the mounted knight had delusions of commanding his own warband… delusions of commanding her warband, in fact. So she kept him close. Close enough that a blade could easily reach his neck.

They were almost to the Basilean’s stores. If her troops could set the piles of food alight, the Basilean force marching towards the Abyss wouldn’t be able to survive long in the harsh wasteland surrounding that awful chasm. The Basileans had hidden it well inside an abandoned Brotherhood settlement but the keen eyes of her scouts had spotted it days before. Taking out the small company of Basileans had proved remarkably simple. She was almost bored by the bloodshed taking place around her.

However, as she barked at her Abyssal Guard to charge towards their target, the door to the stores slowly opened. Out of the gloom emerged a lumbering Ogre Palace Guard. His elaborate armour caught the last glimmers of the setting sun and he struggled to squeeze his massive frame through the store entrance. Ma’baya smiled to herself. Finally, things were about to get interesting. 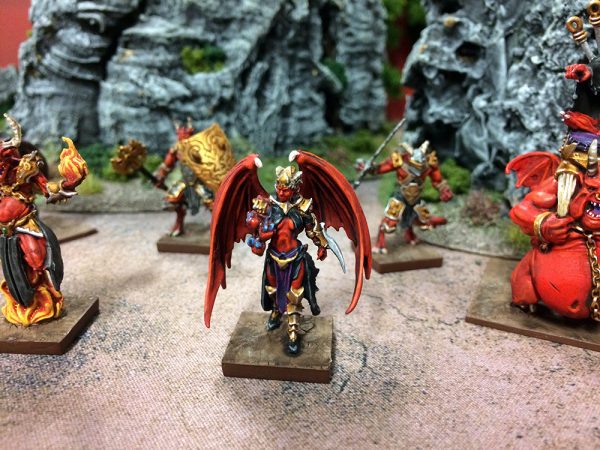 Welcome to another one of our Mantic warband blogs! Today it’s my turn (Rob) to introduce my warband – Ma’baya’s Bloody Knives. To be honest, when looking at what faction to choose, there was only really one option: goblins. No, sorry – I mean the only option was the Forces of the Abyss.

The main reason for choosing Forces of the Abyss was that I had been thinking of putting together an army for Kings of War for a while. Then during the Vanguard Kickstarter, the concept of the Warlock riding a big cherub absolutely pushed me over the edge (of the Abyss). This is one of my favourite miniatures in the entire Kings of War range, so I knew that Forces of the Abyss were the way to go. Until the Vanguard goblins come out in 2019, that is. Spoilers!

Starting with my leader, I had three options: Tormentor (Champion), Seductress and Hellequin Blood Masque. All offer a great command option, but in the end I opted for the Seductress. From a visual point of view, it’s a great miniature but she’s no slouch when it comes to combat either. She rolls 5D8 and hits on 3+, so there are plenty of opportunities for hits and (hopefully) some exploding 8s. What’s more, with Fly she’s going to get around the board quickly and her Stealthy ability should help to keep her protected from rogue arrows or spells.

Next, I had to select my troops. We’ve covered troop selection in a previous blog, but the basic thing to keep remembering is that for every three Grunts and or Warriors in your warband, you can take one command unit, one spellcaster and one support unit. To unlock a decent amount of specialist options, I knew I wanted at least six Warriors/Grunts. With this in mind, I went for two Flamebearers (Grunts), two Lower Abyssals (Grunts) and two Abyssal Guards (Warriors). I also gave each of the Abyssal Guards the Heavy Weapon item, which increases their Crushing Strength (1) to Crushing Strength (2). I also gave my Guard with the Shield the Large Shield equipment, which gives it the Defender special rule (and also looks cool). 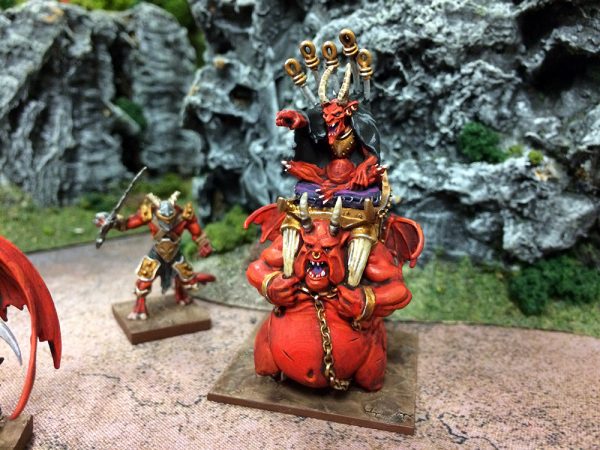 To give the Warlock a little extra oomph I used the special rules for exchanging spells to replace the Warlock’s standard Hammer spell with the Abyssals’ unique spell, Immolation. And don’t worry, we’ll be covering spells in a future blog!

With my Commander, Warlock and six troops all locked down, my 200pts was beginning to disappear pretty fast. I now had space for a couple of support models, more Grunts/Warriors or a Command model. That’s right, you aren’t limited to taking just one Command unit in your warband. Although I had initially dismissed the Hellequin Blood Masque, I decided this might be a better option than the standard Hellequin. 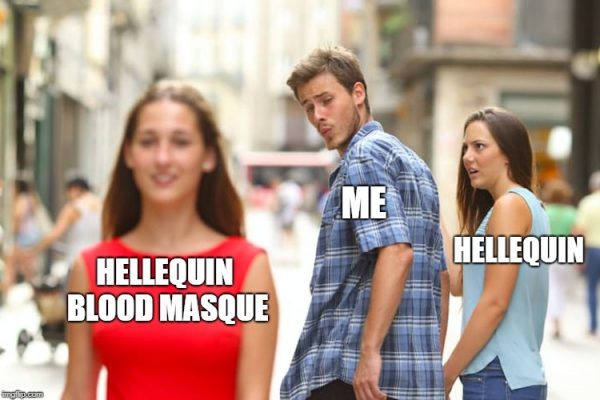 You see, although the Hellequin and Hellequin Blood Masque have relatively similar stats, the latter has a couple of advantages. Firstly, he has an extra wound, he also has Crushing Strength (2) and he has a special ability called Expert Rider.

However, the thing that really caught my eye with the Bloody Masque was the fact he comes with two red Power Dice. These additional red dice will be added to the standard three red Power Dice each player receives and the two white Power Dice generated by the Seductress. Considering that Power Dice play such a key role in the game – as you can read about shortly, dear reader – the more I’ve got to play with, the more tactical options I’ll have in the game. I also gave the Hellequin a Battle Potion.

All this means my final 200pts warband looks like this:

We’ll just have to see if all my nefarious plotting actually works!