Kyle here! In yesterday’s blog, we covered the core units for the Ogres. Today, we get to look at all the wonderful toys in the list. Ogres are blessed with a wealth of highly useful monsters and titans as well as some incredible hero and Legendary unit selections. Each give tools to compliment the core of your list and they’re so fun and flavorful, you’ll absolutely want to be including the right ones into your lists.

I’m now picturing Mawbeasts running across a battlefield with broad, toothy smiles, tongues wagging loose out the corner of their mouths as massive Ogres hang on for dear life while giggling like a schoolgirl – all in slow motion to 80’s synth and slow inspirational piano. And it’s an appropriate visual for what the Warrior Chariots bring to the table! Taking what the basic Ogre Warrior does well, you gain bumps and speed and add Thunderous Charge (2). These are a wonderful cavalry-esque, pure combat option. They’re most effective on the charge, but to really bring out their one-shot potential, take them in the formation, Hell on Wheels where they gain Rampage (D3)!

It’s not just the Warriors and Boomers that get Chariot love. This is the movement option of choice for the burly boys and girls of the Mammoth Steppe. The Ogre Warlord can be overlooked for options like the Berserker Bully, but with Nimble and a Chariot mount, it becomes a big threat for flanks or long distance corkscrew charges. The additional Height of the Chariots grants visibility to help them see over Ogre units on foot. Proper layering and nimble make a lot of charges possible with them. Not to be outdone, the Ogre Sergeant also has the option for a Chariot. I really like the ability to swap out its shield for a Heavy Crossbow. The Sergeant can do some excellent harassment work at a distance with the crossbow and their Melee stat doesn’t suffer for it, meaning you can jump into a combat or act as chaff in a pinch.

They do the Mash

I find that Monster and Titan types can work well in larger based armies such as Salamanders or Riftforged Orcs. The “texture” of large and small bases working together can help you dictate what units are chargeable in a defensive structure while being able to break out of it on offensive fairly easy. Ogres have this advantage as well, being primarily Large Infantry and Chariot base sizes. Thankfully, they’ve got a roster of Monsters and Titans that make the other races jealous.

It’s really fun when a unit is able to break the conventional rules of the game. The Crocodog Wrangler not only does that with its Through the Legs rule, it’s visually thematic and flavorful. At 110 points, this unit can play several roles for you. Emergency chaff that stops a vulnerable unit from getting charged? A surprise character assassination attempt? This unit hits almost as well as a vampire! For the points, it’s hard to not want to include at least one in your list.

The Goblin support brings it again with another insanely flavorful unit in the Red Goblin Blaster. A highly volatile and potentially devastating payload of bombs and explosives that are essentially the Crystal Pendant of Retribution in unit form. Charge in and if you hit at all, this thing is going away so it’s a one-and-done combat. It’s so fun because it can be a real distraction for your opponent who absolutely wants to get rid of it before it gets to blow up in their face. Use that to your advantage!

The Giant and Red Goblin Slasher fill the Titan spots. The Giant can select either the Giant Cleaver or Giant Club to add even more additional random attacks to whatever unit type needed. Its nerve value can also become a decent anvil in a list that rarely sees nerve numbers above 17. The Red Goblin Slasher was recently bumped to Unit Strength 2, and while Ogres rarely struggle with Unit Strength, it’s a welcome addition. Being able to provide additional ranged support give this unit that familiar split profile where it can threaten at range and in melee, making it a nice compliment for those build styles.

Last and certainly not least, is the Ogre Mammoth. With strider. It’s kind of a Big Deal. Honestly, Jesse would lose his mind for this unit. It’s everything he could have ever wanted and we as a community have made him proud. The upgrade to The Big Deal is a no-brainer here. Brutal (2) is insane and being able to add Brutal +1 to a critical combat somewhere nearby is clutch. Easily one of the best options in the list to make what Ogres do, even better.

The real gold of this list lies in some of the best hero choices in the game. First and foremost comes the Ogre Warlock. At face value, the Warlock is like any other caster. The critical difference is in their ability to add additional dice to certain spells they cast for having friendly core units nearby. This means your battle line becomes a battery that super charges what a Warlock can cast turning the power up to 11. The chief Warlock, is Nom-Nom himself. Nomagarok is an Ogre Warlock with the same battery boosting  ability, but comes with Heal! This is one element of the Ogre list that is seriously lacking that Nom brings. On top of that, any unit healed gains Vicious until the next turn. It’s an incredibly useful and powerful support piece.

What may be my favorite Ogre model, the Berserker Bully lives up to its name. There’s a very straightforward approach in its stats, with 8 attacks on 3’s at CS2, it’s hard not to see what the Bully does well. What can be missed is its flexibility to be an assassin type or even hunt late game objectives. Having inspiring means it can operate entirely on its own, making wide flanking maneuvers that many opponents won’t want to dedicate resources to taking out.

Brutal is an excellent rule to have but the shame of it is that it doesn’t stack with other nerve modifiers such as Dread. Kuzlo & Madfall are the secret to getting extra nerve modification. Their special rule Ravenous Lizard reduces the nerve of every unit within 6” by 1. This can be massive when combined with Brutal. At face value, Brutal is +1 to your nerve test result. Combine this with The Big Deal and have a Brutal (2) unit attacking something within range of Kuzlo & Madfall and you can effectively modify their nerve by 3! With so many elite units at 15/17 nerve, synergizing to reduce a 200+ point unit’s nerve down to 12/14 is a terrifying possibility of being one-shot by even low attack units!

The true legend of the Ogres is Grokagamok. Massive even by Ogre standards, Grok wields a massive axe appropriately named The Amputator. This makes every attack he rolls gain the Blast (D3) rule. On a perfect roll, he could spike up to 21 attacks! Imagine that sort of thing on a flank, which is particularly easy to get on a 40mm base. He’s expensive but the threat alone is just pure fun. If you need to feel like you’re controlling a real warlord and Living Legend, there are few who do it better than Grokagamok.

With the new Ogre Hard plastics, this range carries what is arguably the best value in a Kings of War. The number of units you can build with the Army and Mega Army boxes is crazy! Especially if you do some creative multibasing. Add on some fancy new Terrain Crate 3 trees, and you’ve got some gorgeous looking units. The Ogres are a great starter army for anyone coming into Kings of War that want some larger models to paint and have a lower hobby barrier. There’s never been a better time to start collecting and crafting your ruthless mercenary forces of the Mammoth Steppe! 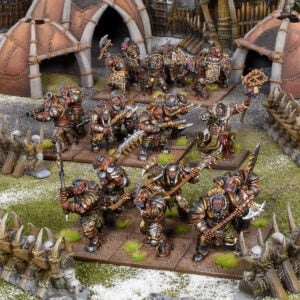 Ogres are mercenaries, happy to sell their skills to the highest bidder. Huge, powerful creatures that might almost have been purpose-bred for war, few races can match them for sheer belligerent power and endurance, and many a war has been won by the side that hired the most. This set gives you enough Ogres to commence your raiding and pillaging of the world. PLEASE NOTE THIS IS A PRE-ORDER AND WILL START SHIPPING FROM NOVEMBER 21ST 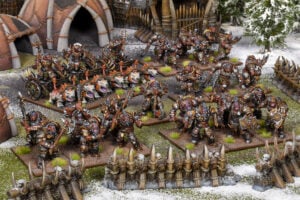 When Ogres unite into large War Parties, it is a rare thing indeed. There is no record of an army ever holding fast against them and scholars debate long into the night as to whether this is because Ogres have so rarely united in force, or because no opposition has ever survived to tell the tale. PLEASE NOTE THIS IS A PRE-ORDER AND WILL START SHIPPING FROM NOVEMBER 21ST