It’s Deadzone: Outbreak week all this week on the Mantic Blog! We’re celebrating the release of the brand-new supplement, Deadzone: Outbreak, which is available to order now. This is one of the most significant releases for Deadzone since second edition came out in 2016. Inside the 88-page supplement you’ll find:

As you can see from the list above, it’s absolutely packed with great content. However, just in case you need more convincing this week we’ll be running through some of the highlights. In today’s blog we’re detailing one of the new factions: Mazon Labs.

If you’re a Star Saga owner, the Mazon Labs will be a familiar name. In the game, the Mazon laboratory is the secret Corporation-owned facility Blaine and his gang of miscreants must infiltrate. However, not everything is as it seems at Mazon, and within the bowels of the complex lurk some horrific ‘experiments’.

The best way to pick up the Mazon Labs faction is to purchase Star Saga: The Eiras Contract because it contains everything you need to create your Deadzone Strike Team. And to celebrate the launch of Outbreak we’ve got a special offer if you order through the website. Enter the code OUTBREAK to get 20% off until August 20th. We’ve even got a limited number of the Kickstarter Editions left, which contain extra Mazon Labs minions and Kickstarter Exclusives, like The Fear for the Nameless faction (more on them later this week). Anyway, let’s look at what’s in the Mazon Labs list:

You’ve got two leaders to choose from: Dr Lucas Koyner and Guard Commander Graves. Koyner is the more expensive at 26pts, however the extra points give you some tasty combat options. Thanks to his robotic arms Koyner has a range 2 Laser Cutter that can burn enemies and two sets of Anaesthetic Injectors that can Stun rivals. He’s also got the Medic ability… well, he is a doctor after all, even if he is evil.

However, it’s Koyner’s ‘splat’ that really catches the eye. Fast-Acting Serum can replace a model from your strike team that has just been killed and replace them with a Plague Victim! That means members of your strike team have a second chance to cause problems – although the newly spawned Plague Victim is placed pinned and activated. 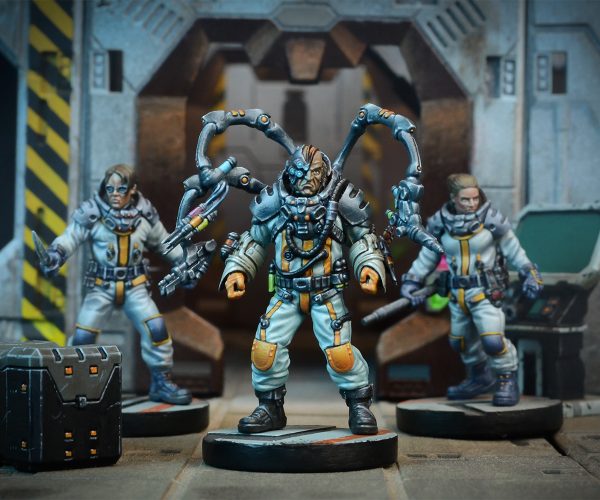 If Koyner isn’t your thing, then Guard Commander Graves is happy to step up to the plate. With a shoot stat of 4+, Graves is pretty handy when it comes to a shoot-out. His Bionic Arm comes in useful in close combat too, with AP1 and the Knockback ability.

When it comes to Mazon Labs troops, you’ve got three possible troops: Mazon Lab Technician (6pts), Mazon Security Guard (8pts) and Urbana Black Wing Marine (11pts). Although the Lab Technician is pretty weak, it’s their Shock Baton weapon that’s worthy of note. If you’ve got a Lab Tech armed with a Shock Baton in the same cube as injured Plague miniature, they will not need to test for Rampage. This is good for keeping your Plague under control!

Meanwhile the Security Guard is a decent standard troop to bolster your forces. But if you want to spend the extra points on the Black Wing Marine, you’ll get Weight of Fire(1) and an improved fight stat.

The Specialists are when it starts to get very interesting for the Mazon Labs because you have the option to include Plague miniatures in your list! Mazon Labs is tasked with experimenting on victims of the Plague, so it makes sense they would occasionally want to watch their subjects under ‘test conditions’. 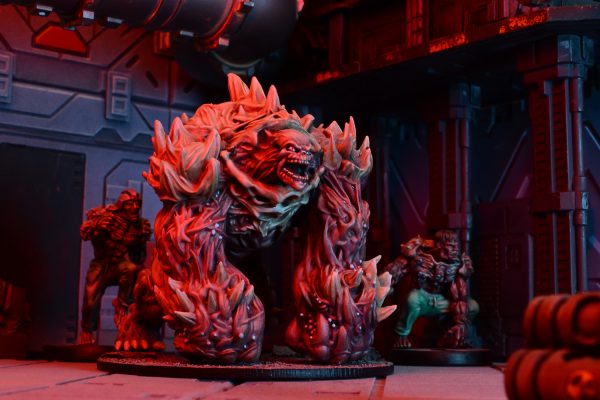 So, with this in the mind, the Mazon Labs Specialists include:

Finally, Mazon Labs can call in a Strider if things get nasty. After all, it makes sense for the Mazon Labs to have a Strider on hand, just in case an Aberration breaks out of its holding pen! The Black Wing Strider has plenty of choices for combat, including a Polaris Cannon, Chainsaw, Assault Flamer and Heavy Burst Laser.

You can see the Mazon Labs faction in action in the battle report from Weight of Fire. Andy from the Deadzone Rules Committee takes on Rob’s Veer-myn.

Meanwhile, DreadPathZone gives you a detailed Mazon Lab faction breakdown with one of the best video intros we’ve seen.

Deadzone: Outbreak is available to order now from your local game shop or the Mantic website. Remember, you can also save 20% on Star Saga by using the code OUTBREAK at checkout on the Mantic store. We’ll be back tomorrow with another exciting instalment!