Last month Andy marched into Rob’s office (office makes it sound far more glamorous than it actually is) and issued a challenge. Within just two weeks he needed to paint and play with the new Dwarf Steel Behemoth, while Andy would take on the Revenant King on Undead Wyrm. Never one to turn down a challenge, Rob agreed and here’s what happened…

Earlier this year I started putting together a Dwarf army for Kings of War. The intention was always to use it in the summer campaign and, luckily, I managed to squeeze in a few battles for the Edge of the Abyss… even if I did lose them all! Anyway, undeterred by the failure of my Dwarfs, when I saw the Steel Behemoth I just knew I had to have it in my army. It’s that iconic unit that you can theme your army around and hopefully draws the attention of your enemy too.

Behind the scenes the Steel Behemoth went through a number of different designs. Originally it was a kind of glorified steam-powered go-kart, which didn’t quite seem to fit the description of a ‘nightmare made manifest’. So, it went back to the drawing board a few times. In this phase it came back as a steam-powered robot, a giant brock (badger) and, finally, a massive ram! The beauty of having our own in-house resin department means that we can finally produce these massive monsters and cram them full of detail. 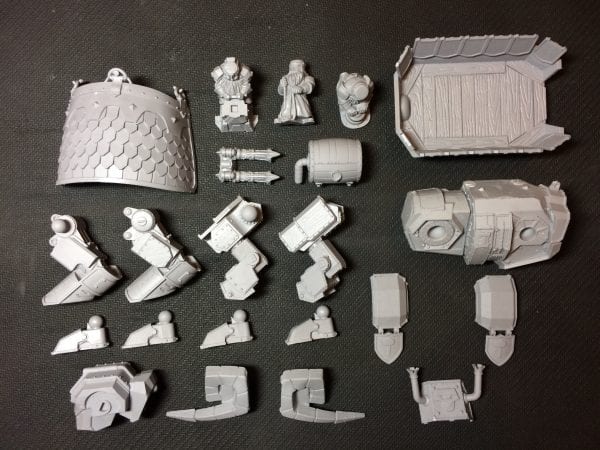 Here are all the pieces. There was hardly any flash or excess resin and, despite the number of pieces, it’s actually incredibly simple to put together. However, it was at this stage I made a crucial mistake… I forgot to wash the Behemoth in soapy water. We’ll come back to why that was a mistake in a moment. 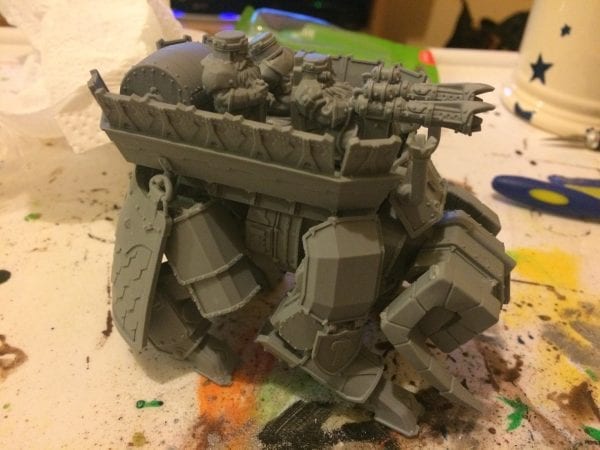 Here’s the Behemoth assembled. I didn’t stick the crew into place at this stage because I wanted to paint them seperately. You can opt to remove the ‘battle kilt’ at the rear of the Behemoth and there’s enough detail underneath to ensure it doesn’t look half-finished. A quick note though, with the kilt you do have to build it in this position and can’t pose the legs too much, otherwise the kilt won’t fit. 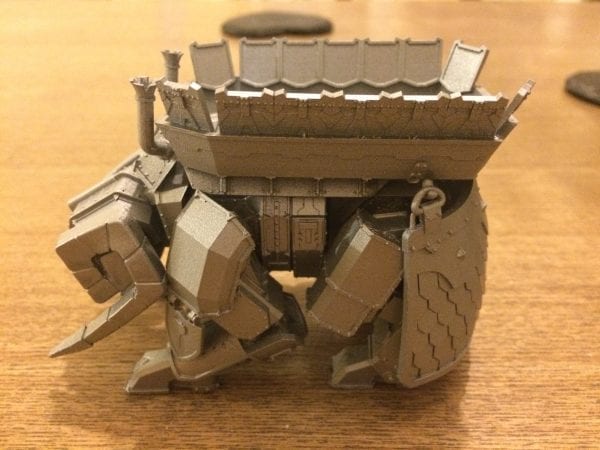 I undercoated the Behemoth with a silver primer from Army Painter and took the crew off for save storage. Everything seems to be going ok at this point. 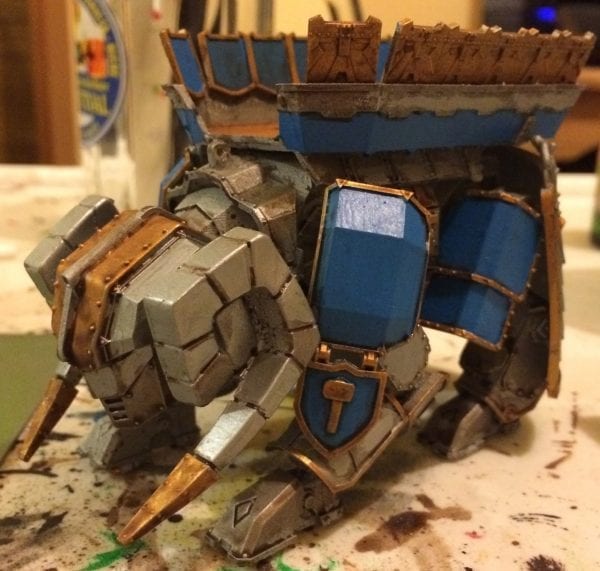 Disaster strikes! Remember earlier I mentioned I didn’t wash the resin? Well, this is when it started to cause problems. Despite the fact it appeared the primer had settled nicely, some of the release agent from the resin mould was still left on the Behemoth. You see, to ensure a resin model pops out the mould easily, it’s coated in a kind of ‘grease’ (I have no idea what the technical term is) that stops it sticking to the mould.

Unfortunately, it also stops acrylic paint sticking to the miniature too. This meant that as I was painting Army Painter Crystal Blue onto the should plates, for example, it was literally sliding off. After initially thinking my Behemoth was haunted (I was listening to a particularly spooky podcast at the time) I realsied my mistake. It wasn’t a complete disaster but it did mean I had to do several coats to get a decent coverage of paint. 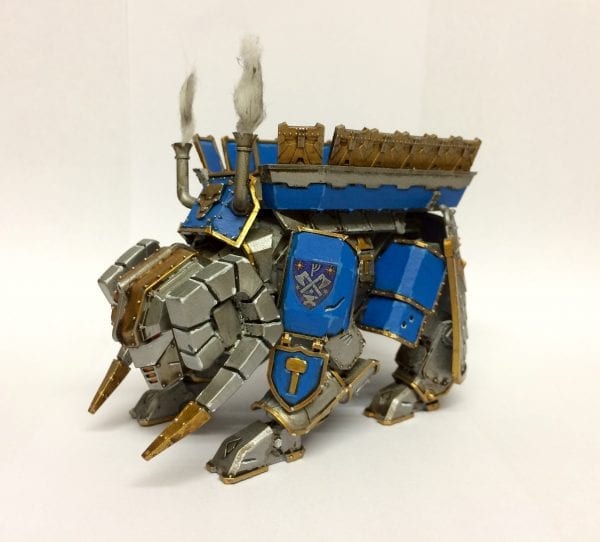 Multiple layers of paint later and the Behemoth was finished. I added some shield transfers to match the rest of my army and used a little bit of cotton wool dry brushed with black to make it look like smoke was billowing from the exhausts. I also tried to add a little battle damage here and there too. 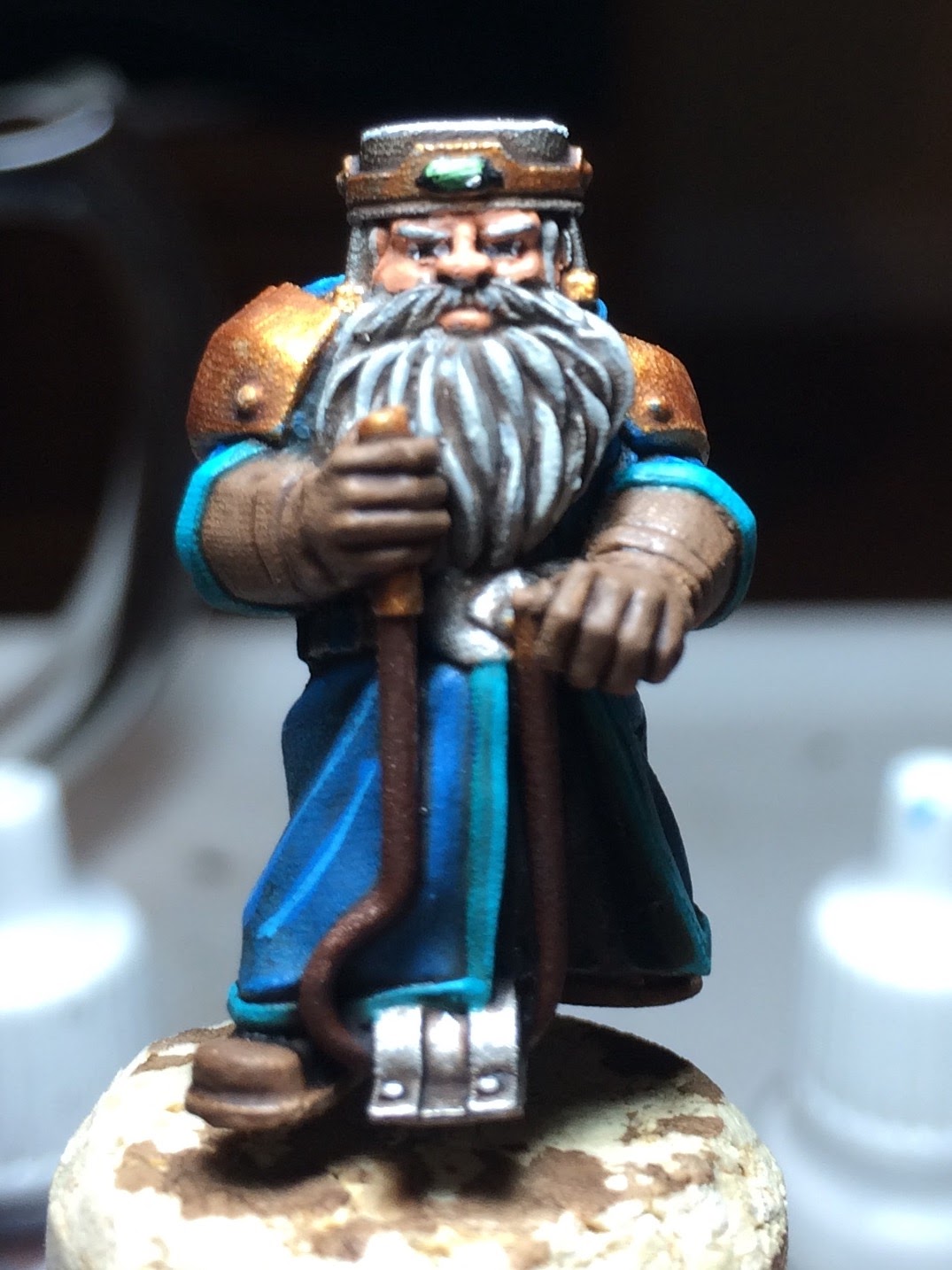 One of my favourite aspects of the Steel Behemoth is the crew. These are some of the best dwarfs we’ve produced, so I really wanted to do them justice. Luckily, I had the opportunity to wash these before priming them, so there was no spooky paint problems this time. I also really tried to get the eyes right on the crew, so opted for tactic of painting them all black and adding white dots either side, which seems to have worked. 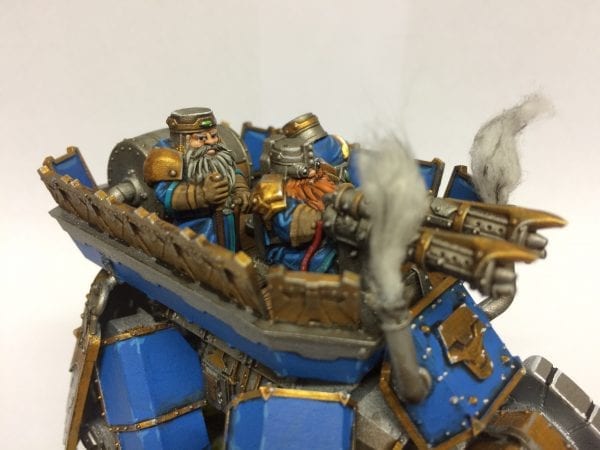 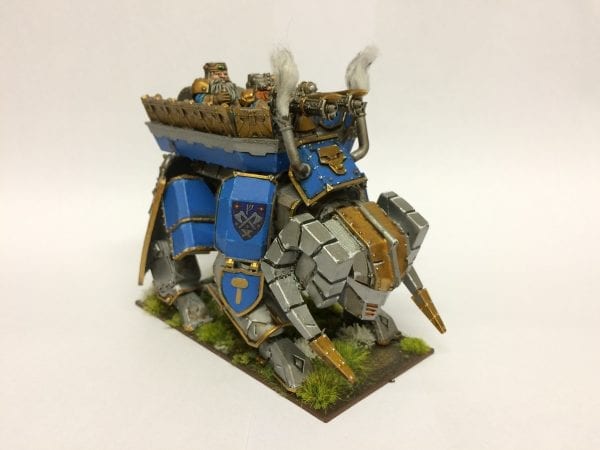 I can’t exactly remember the dates and painting times for getting the Steel Behemoth finished but it was around a week of painting for about three hours each evening, although I’m quite a slow painter. Alongside the Greater Earth Elemental this is definitely one of the most iconic units in my Dwarf force. It looks great stomping across the battlefield towards the foe and the Kings of War Rules Committee is looking at amending its rules to represent the form a little better. What rules do you think it should get?

The other part of the challenge was to use the Steel Behemoth in an Edge of the Abyss campaign battle. Unfortunately real life got in the way of me being able to take it for a test drive but I lent it to Ronnie for the Battle of Bulwell and it featured as part of his 4,000 point force! It was also one of the few units to make it to the end. However, I’m hoping to use the Steel Behemoth soon and you can see what it looks like as part of my army below.

THE NEXT PAINTING & GAMING CHALLENGE!

With one painting/gaming challenge under their belt, Andy and Rob have another challenge and this time they want YOU to get involved! By October 31st we want you to paint a 150+ point Deadzone Strike Team and send us pictures of it being used in a game of Deadzone. Throughout the process you can email robert.burman@manticgames.com with pictures of your progress and small updates, so we can create regular blog posts. On November 6th, we’ll choose our favourite strike team and the winner will receive a Deadzone faction starter or faction booster of their choice. You better be quick, Rob’s made a start already…