Road to Firefight: The Fast and the Ordnance

Hey, what’s up, everybody? John Jack here for another installment of my Forge Father 1000 point list for Firefight. I’ve been working on the Brokkr Valkyr bikes and the older model Jotuun Weapons platform. These will be a, hopefully, nice dichotomy of sitting still and shooting the crap out of the enemy and speeding across the table to seize key points. Fast Forge Fathers? What a concept.

As usual, my paints are mostly Reaper paints, Citadel washes, and Army Painter metallic. I am trying out the Secret Weapons Weathering Acrylics paints on a couple things. There’s some really nice in-between colors I couldn’t find a substitute for. Everything was primed gray with Dupli-Color automotive primer.

To start off I painted the tires with, what else, Secret Weapons Tire Black and then went over it with a dry brush of Rubber. 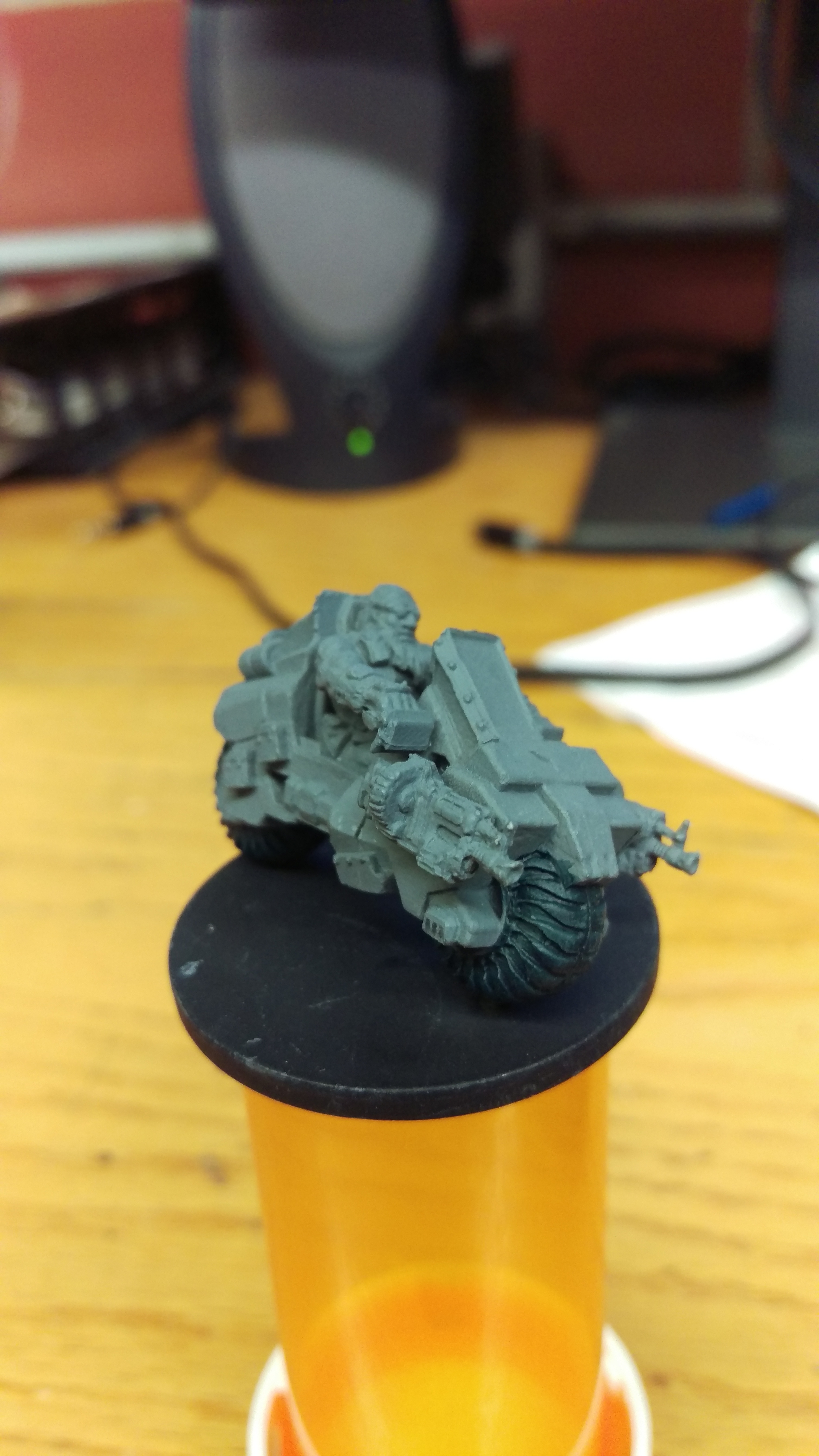 Next up, the flesh on the Brokkr arms and face I used Reaper Tanned Flesh and painted the coveralls with a Reaper Tanned Leather. I think the standard orange/red jumpsuits they sometimes are seen with look like convict uniforms so I went a more industrial garage mechanic look. The beard on this guy was the Reaper Leather White, the other one not pictured was more of a brick red. 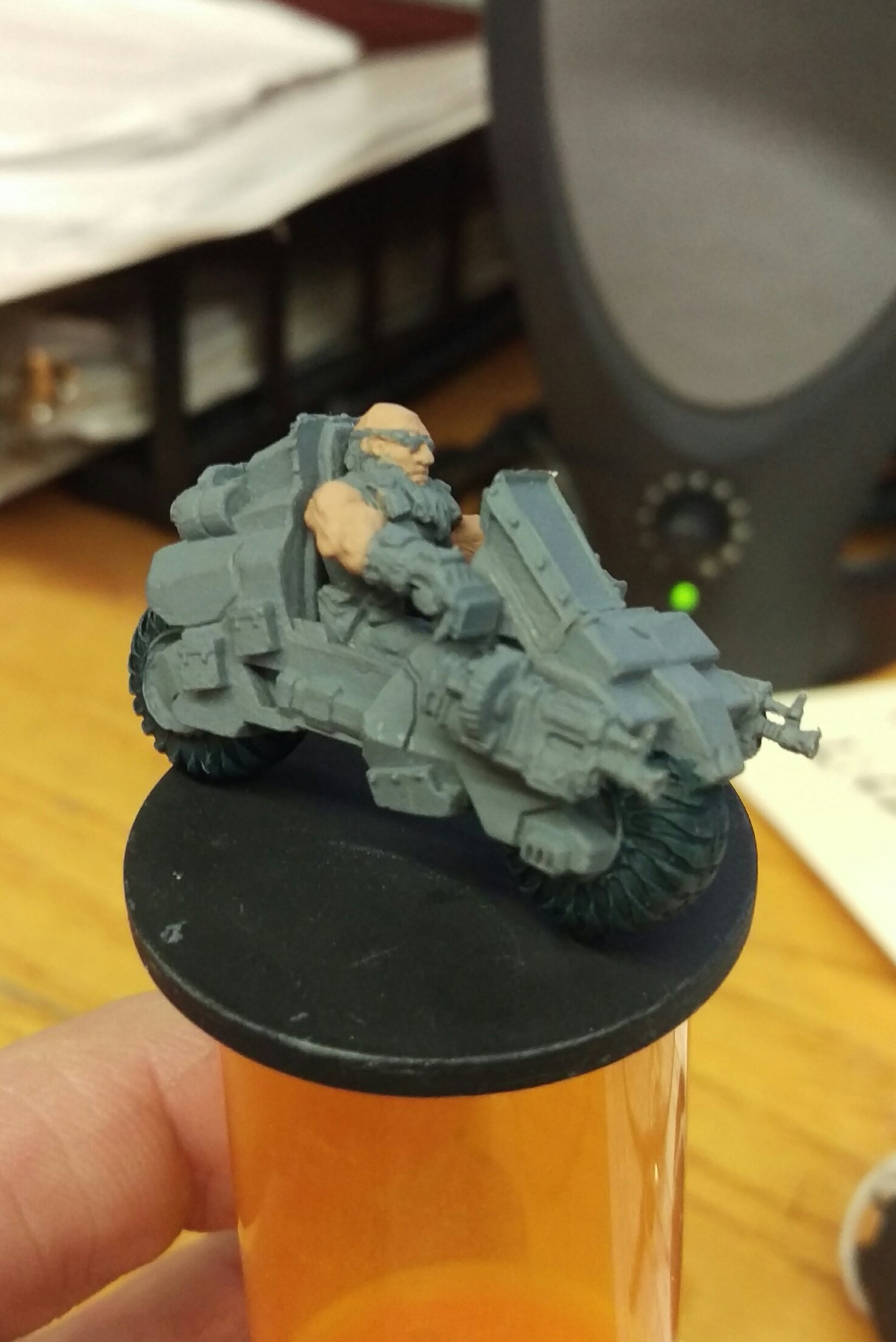 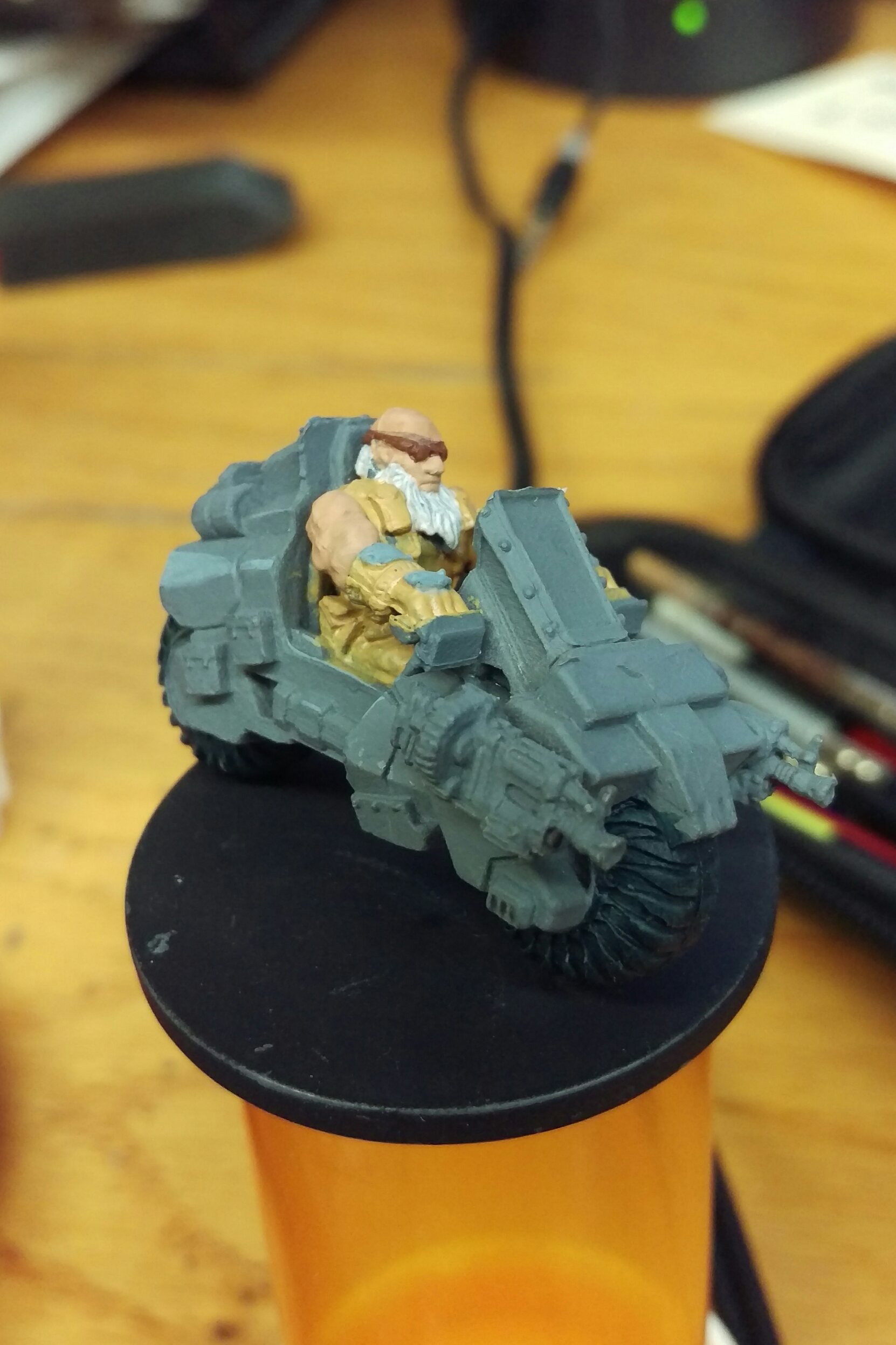 I went with my standard Reaper Steely Blue for the guns, wheel hubs, center body, windshield, and rear engine exhaust. Keeping everything in the kind of industrial look that I think is the Brokkr aesthetic for my guys.

I topped it all off with the Citadel Gloss Reikland Flesh Shade for the skin and uniform and the Gloss Nuln Oil for the vehicle. I went back over the flesh with the Reaper Tanned skin after it had dried because it looked a little TOO grungy. I also went over both vehicles with Testors Dullcote to take the shine off.

Now you’re probably wondering why I use the Gloss washes only to go over them with Dullcote. I have found that the Citadel Gloss washes seem a little more viscous and don’t tint whatever color you’re washing over with. It gets into the little nooks and crannies and stays there better. But who wants shiny, shiny Forge Fathers? Not I! 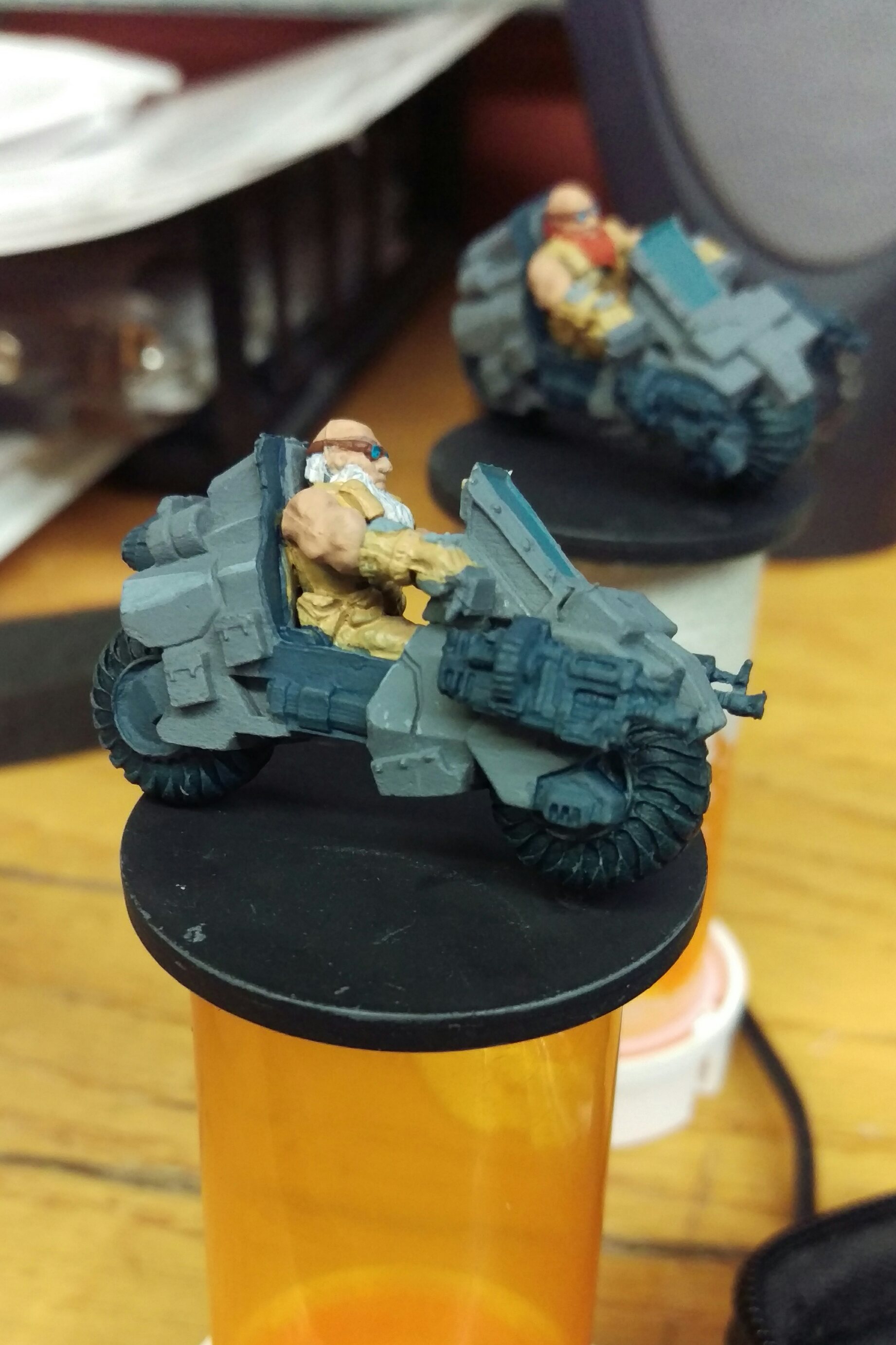 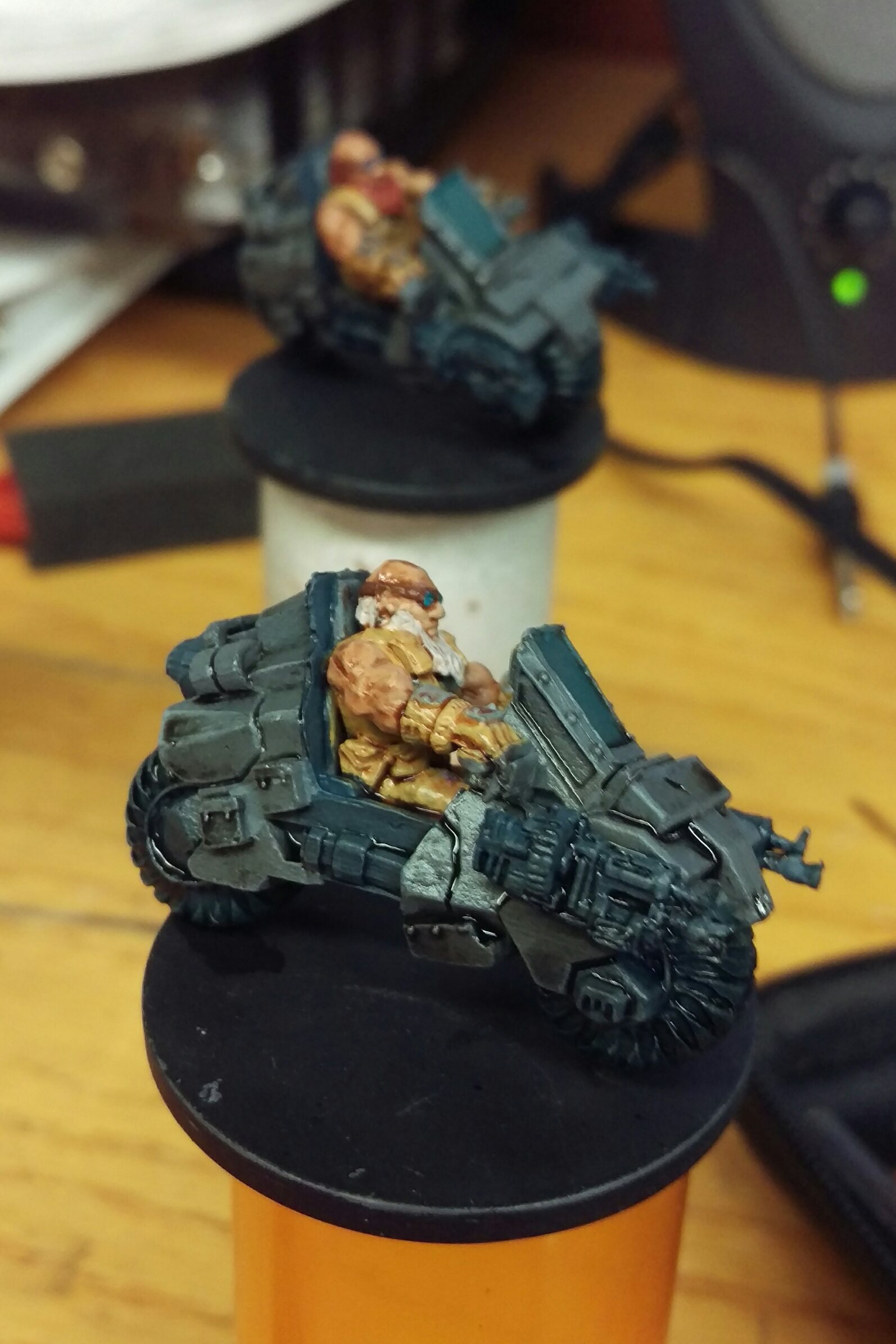 Up next is the Jotuun Weapons Platform.

Again, I started off with the gray primer and started adding a little bit of actual color to this by painting some of the armor plates, tread base, and front shield with Reaper Ashen Blue. I thought this was a little more subdued blue instead of something that was just BLUE! 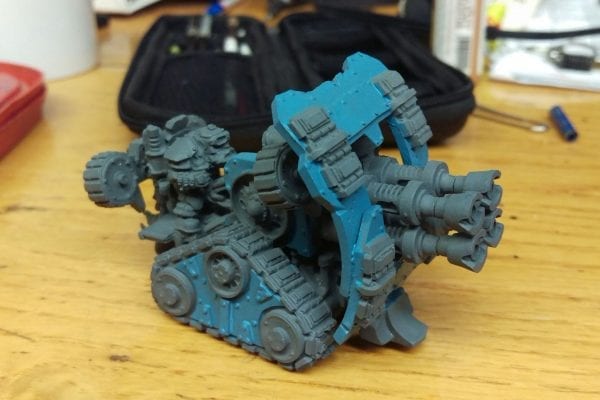 I wanted some big metallic parts on this big boom gun but I wanted to make sure the Army Painter Greedy Gold would cover so I used the Reaper HD Suntanned flesh. It’s roughly the same color and gives it a nice bade to highlight later. I used that on the tread wheels, barrel recoil inhibitors, the muzzle, and the ammo drums 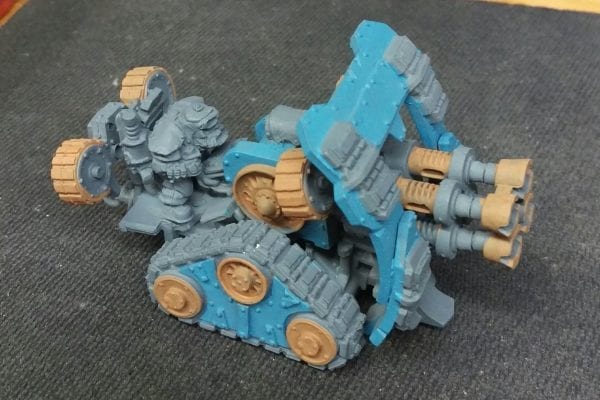 Next I went over all the vehicle treads and replacement treads on the front shield with Reaper Dark Elf Skin. It’s kind of a purple-ish gray that should take the Nuln Oil pretty well when I go over the whole thing. 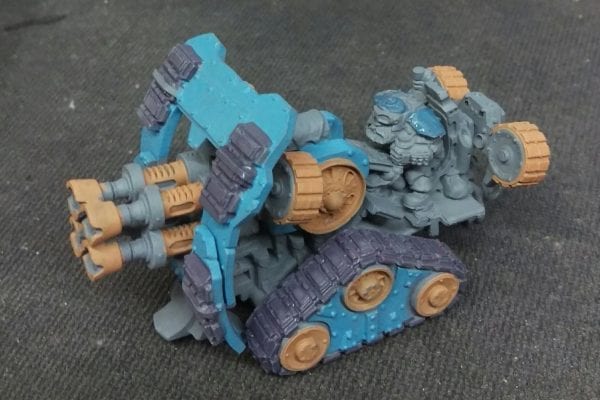 I painted the driver, that SOMEONE foolishly glued in before painting, with a little Reaper Tanned flesh for the nose and upper cheeks, Reaper Leather White for the beard and Reaper HD Concrete gray for the incidental helmet and exposed armor. 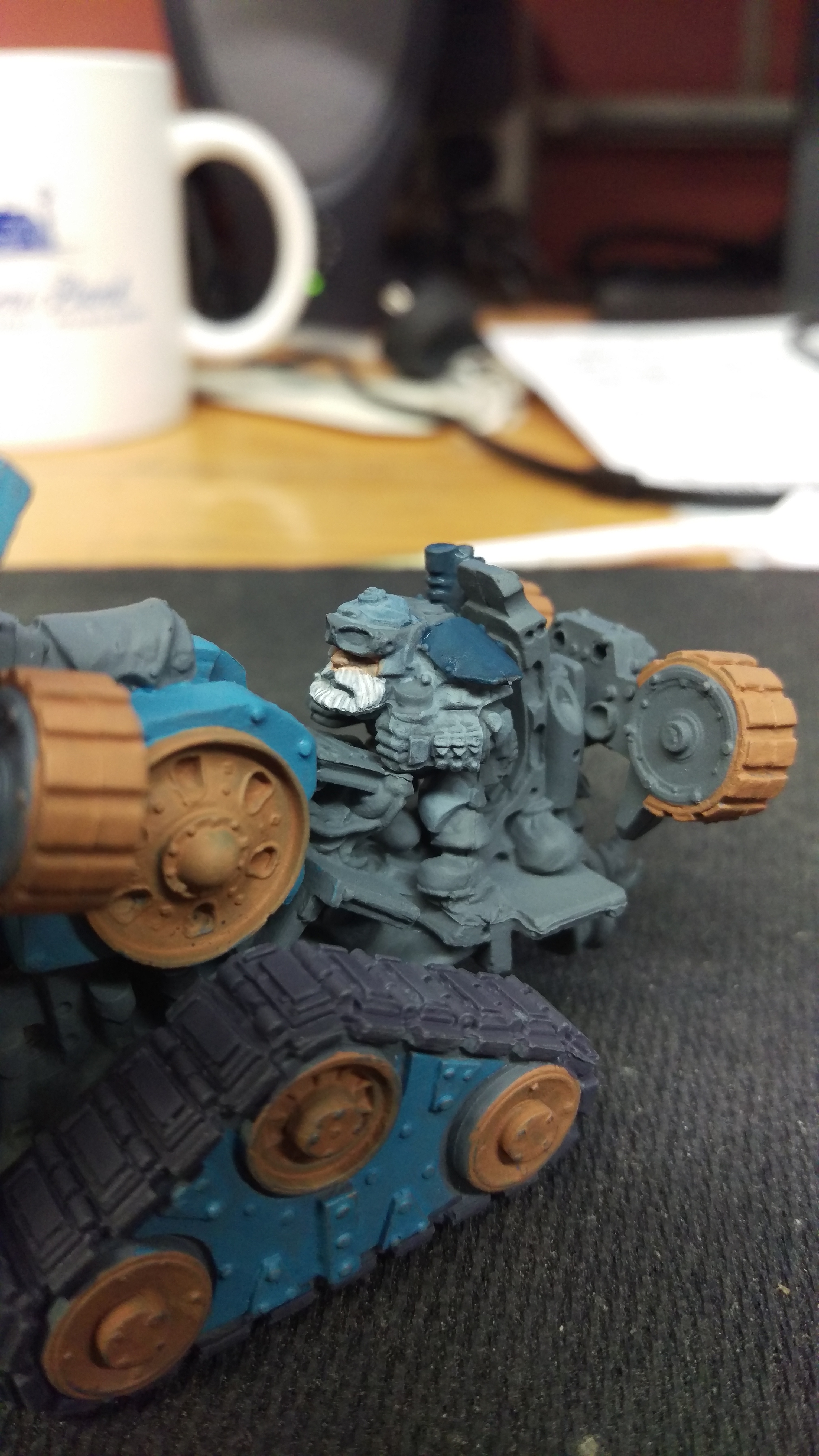 I went back and used some of the Reaper Steely Blue on the other exposed parts of the barrel, the operators weapon, and shoulder pads because it looked a little too one color. The, for the last highlight before the washes go on, I picked outs some highlights and drybrushed the Army Painter Greedy Gold on the parts I had gone over with the HD Suntanned Flesh. 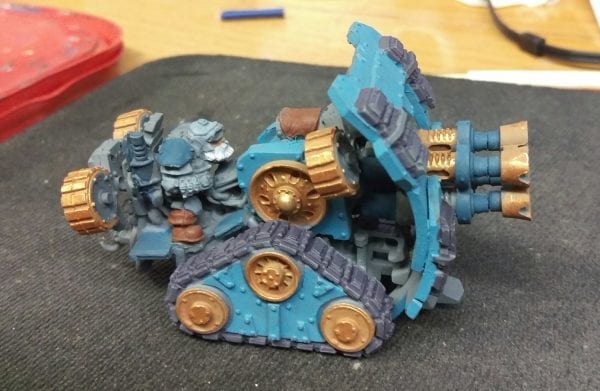 Time for a wash or two. I used my standard Citadel Gloss Reikland Fleshshade on the gold parts and the Nuln Oil on the rest. I went back over the Ashen Blue plates again in a few spots since I had to lay the model on its side to get the wash to settle where I wanted it. Then finally some metallic highlights with Army Painter Gun Metal to get a little glint here and there. 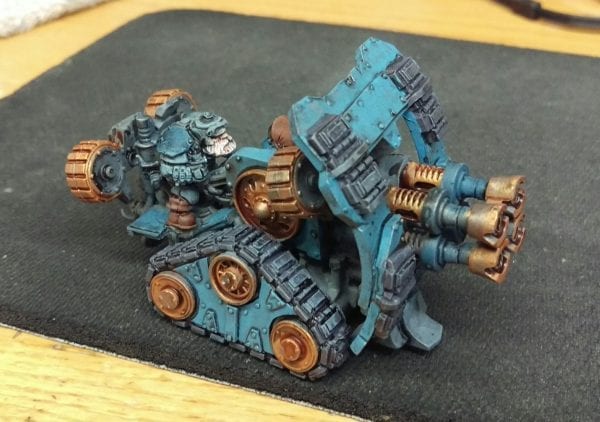 Up next, the rest of my foot troops; Steel Warriors and Stormrage Heavy Weapons Veterans and *hey presto* all done. And just in time for Adepticon!!