Ronnie Talks Hellboy Ahead of the Kickstarter 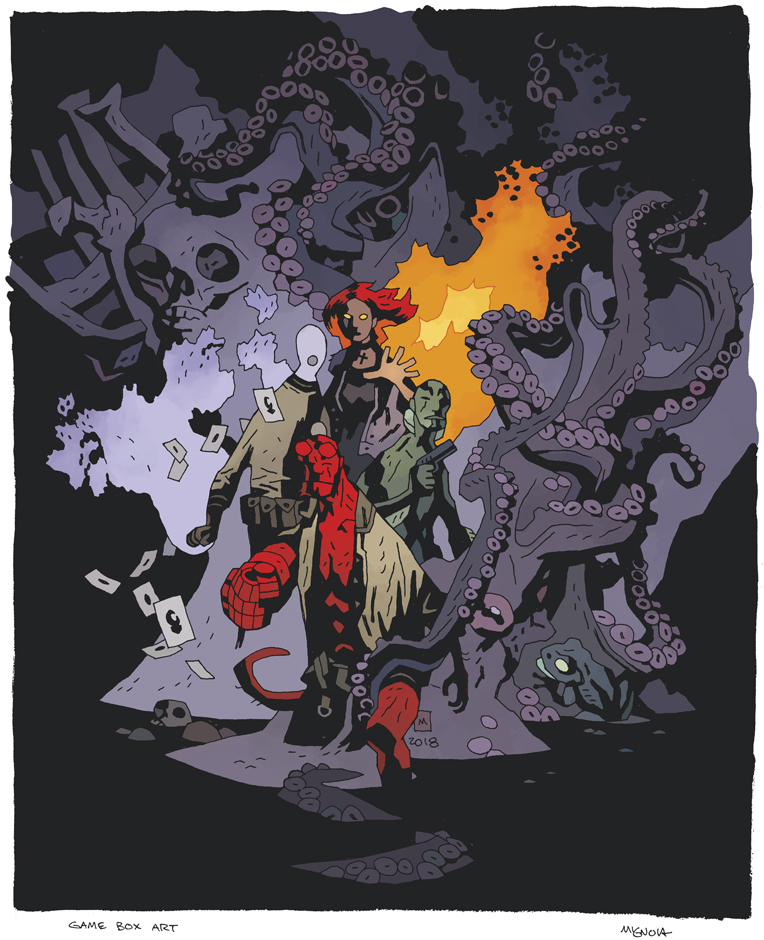 I’ll be honest, it’s a little bit exciting around here right now! In case you’ve missed it (which by this point is hopefully nobody!) we have a Kickstarter going live tomorrow… and we are very very thrilled about it!

We know this is a massive licence, and an absolute fan favourite – most of the Mantic office included! The feedback we have got so far suggests that we are getting it right – and we are absolutely determined to deliver a Hellboy experience that’s bigger than a Tentacle Monster. 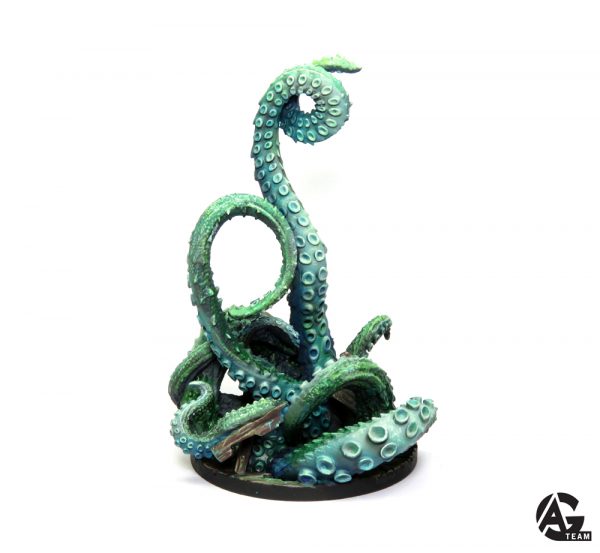 If you have been off exploring haunted houses for the last week and missed it, you can see all the latest on sculpts, game play and the game design over on the Hellboy Blog week here.

However, I just wanted to drop in with an update about a few insider facts and housekeeping points, so nothing gets in the way of the big launch tomorrow.

To nip any conspiracy theories in the bud, I wanted to let you know that we will be running this campaign in UK pounds. In this day and age it should make no difference to the currency you see on the Kickstarter page, because they do an approximate translation into your local currency. It might mean the dollar amount is not a round number, but other than that it should not be anything to worry about. Originally when we first used Kickstarter, dollars was the only option but now UK pounds are an option so we’ve made the switch. What’s more, there was also a rather boring (and complicated) tax issue that was causing problems too. Hopefully it’ll make no difference, but if it does please let us know and we can review this for future campaigns.

Ok, on to the fun stuff… 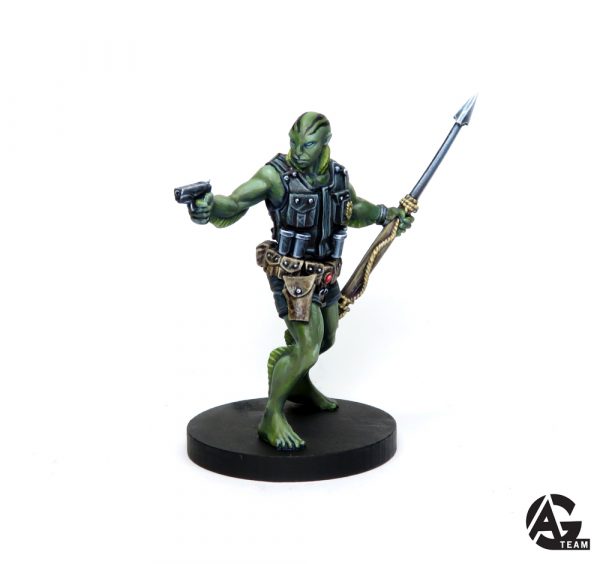 Every KS campaign has a tipping point where the value goes from Good, to ‘Wow, that’s insane!’… and every Mantic campaign gets there, sometimes (remember “I survived $256k!”?) slightly longer than others, but they always do!

Well, with Hellboy we want to hit that insane value level right out of the blocks…so the ops and design team have got themselves together and put together a waaaay sexy core pledge… with a complete game, and 2 expansions plus a whole heap of amazing bonus minis (like the awesome Kickstarter exclusive Hellboy below) right from the off. This should help as many Hellboy fans jump in right at the start and begin unlocking those sweet stretch goals to add even more miniatures.

To help us hit that funding goal in record time, we even have a small number of early birds for our long time loyal fans. So be there at the start to grab the already awesome pledge at an even better price. Mantic is also committed to supporting and working with hobby stores all over the world, and we will have a retailer pledge from day one so retailers can have one-time access to the Hellboy Kickstarter edition while the campaign/pledge manager is open. 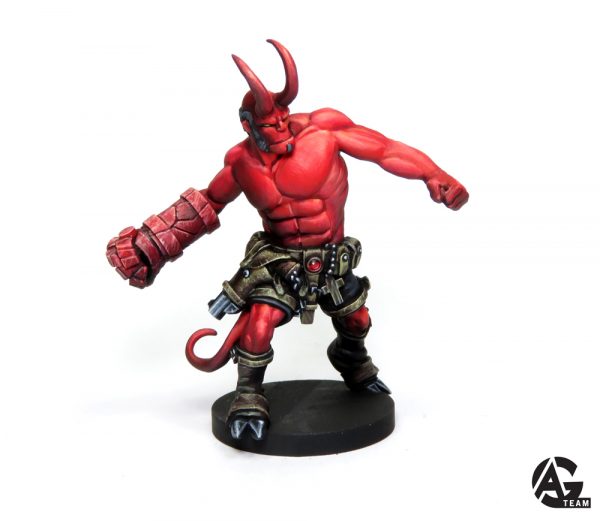 Dark Horse and Mike Mignola have been incredibly helpful throughout the time we have been working on this… including a unique new art piece from Mike himself. I’d like to take this opportunity to thank all those at Dark Horse and Mike Mignola for their support and advice. And finally the ops team have been slaving away to make sure that the big uber box of Hellboy goodness comes together beautifully packed in a unique Kickstarter exclusive box. This will contain the game, the expansions, and all the stretch goals we hit. The trays will be designed to both work to ship the contents out safely to you, and as a place to keep everything neat and tidy for repeated play.

What about our other Kickstarters?

The final Warpath vehicles are now with us and we will be processing shipments to Kickstarter backers within the next few days. TerrainCrate is just going through final assembly, and boats are being booked for delivery in May/June (depending upon where you are in the world). From our ops team, Matt visited one of the plastic factories in China recently to check on the TerrainCrate progress and to make sure the models were looking good. Here is one of the pictures he took from the factory floor (not literally!) 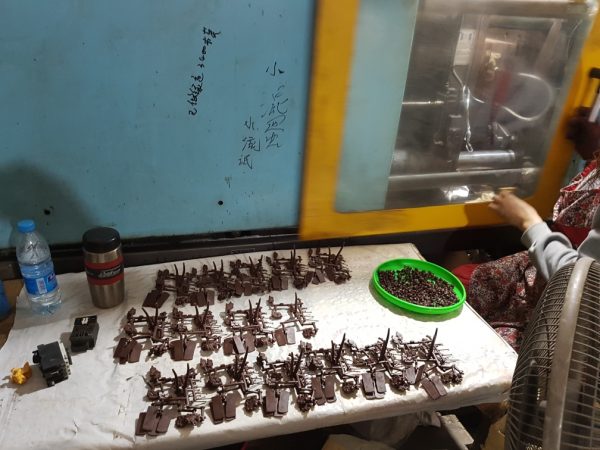 TerrainCrate pieces straight off the production line. Taken while Matt was in China.

For Star Saga wave 2, all the print files are in China being worked on and the plastic test shots will be with us next week ahead of production (just so we can check they’re looking good). Vanguard plastic models are in tooling and the resins are already in production and on schedule.

So, I hope this has hardened your resolve to get on board with Hellboy at the get go, and ride this monster through to the big boss end battle – if so, I will see you online at 8pm UK BST, 3PM eastern and 12PM on the west coast for some serious fun with Anung Un Rama 😉