It’s Star Saga Week on the Mantic Blog and over the next few days we’ll be exploring our brand new sci-fi dungeon crawler in more detail – looking at the rules, solo/co-operative play, the evolutions from Dungeon Saga and more.

However, today we’re starting with a little bit about the story in Star Saga and we’re going to meet the mercenaries you can play as during the various missions. The storyline plays a key aspect in Star Saga because the dungeon master – also known as the Nexus Player – will read out the plot as the mercenaries progress and some events will trigger new sections of the story.

Through his network of underground contacts, Blaine has been offered a job. It is a simple one, though not without risk. Data relating to vaccine development has been stolen from the client corporation and taken to a research facility hidden beneath the surface of Eiras. The job is to recover this data and destroy all records of its presence.

Nothing, of course, goes to plan. The team quickly finds their cover blown at the entrance to the complex when their counterfeit credentials are exposed. As the team fight their way deeper into the facility, they are able to retrieve a few scant clues as to the truth of the facility’s purpose – it is owned by Mazon Labs and its chief scientist, Dr Lucas Koyner is working on something called ‘Vector-P’ in the lower levels.

Though neither the team nor Blaine know it, they have actually been contracted by an agent of the Council of Seven. Koyner’s work is part of Project Gorgon, the Council’s most secret research group, tasked with thinking the unthinkable – including working to control and utilise the Plague. Koyner has come close to a breakthrough, but as clever as he is, Koyner has become greedy. There are many potential buyers for such a powerful property and Koyner has been caught discussing its sale. The decision has been made to eliminate him and take what he has created elsewhere. Of course, the Council can’t be seen to interfere with one of their top corporations and need plausible deniability, so it is Blaine’s team that are selected as assassins (and scapegoats) for the job.

All of this leads to the final showdown with Koyner, and then Monarch, but I won’t spoil the ending. You’ll have to play through the game to find out more! 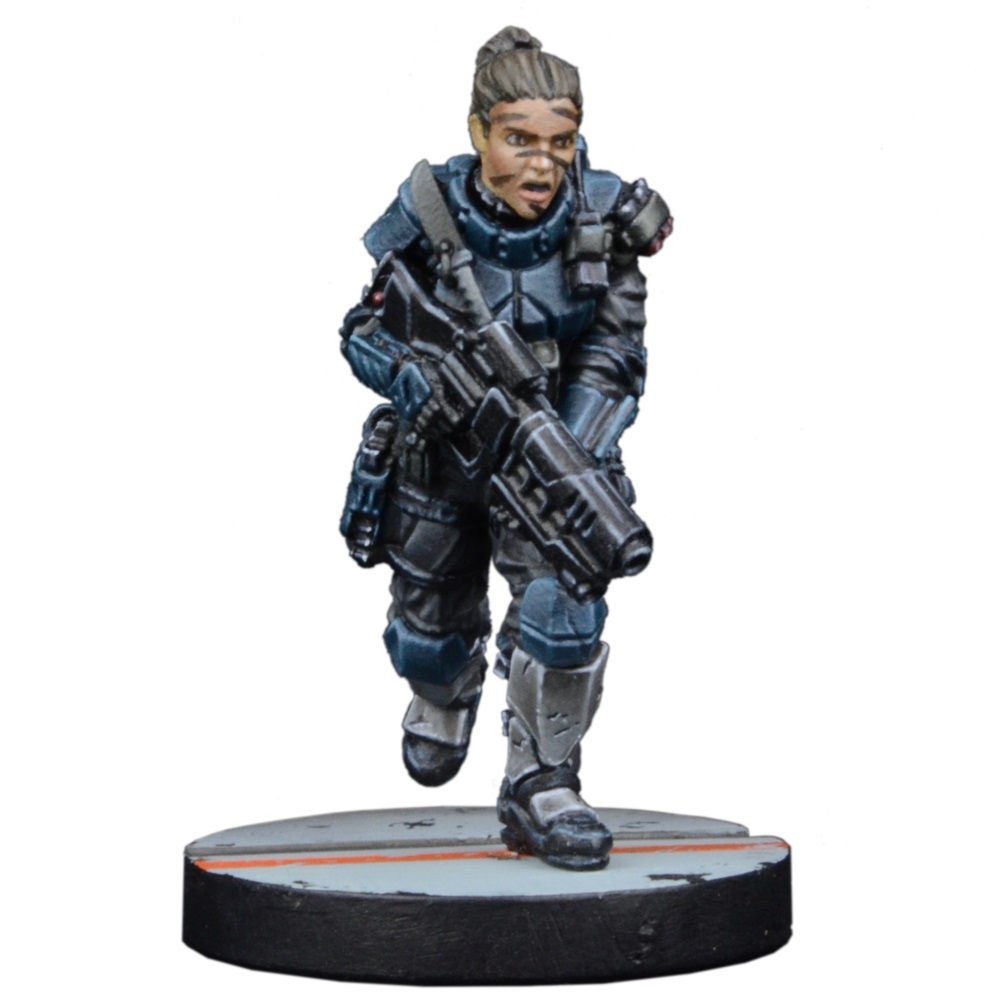 The nickname ‘Captain’ or ‘Cap’ is a well-earned one. As an officer in the Reiker Corporation’s armed forces, Dulinsky served on a dozen worlds and through three separate campaigns. Those who knew her in those days say she served with honour and distinction. Most famously she saved the lives of a dozen wounded marines when she dragged several out of the line of fire of an Orc heavy gun emplacement. Dulinsky then returned to the position with her men’s grenades on her webbing and destroyed it. She subsequently engaged and destroyed two more, similar emplacements.

The exact circumstances of her dismissal from Reiker are unclear – her records remain classified. Some say she was fired for insubordination. Others that she simply realised there was more money to be made soldiering as a mercenary. Whatever the case, her leadership and tactical skills place her in high demand amongst military freelancers and her bravery and calmness under fire make her an invaluable teammate. 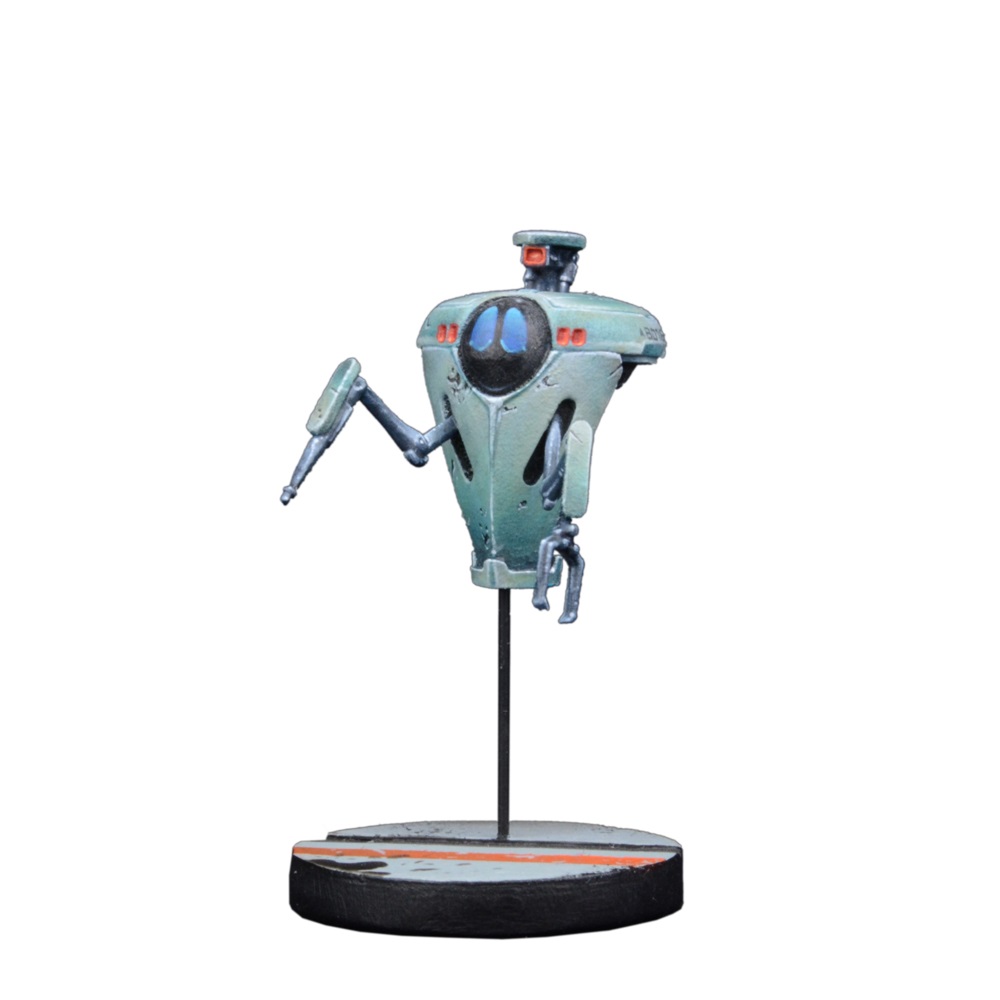 Combat Utility Robots are found throughout corporate space and are designed as modular support ‘bots for organic fighting forces. Designs vary across manufacturers but operational flexibility is a requisite of construction. Some work as ordnance disposal ‘bots, others as haulers, carrying or towing gear. Basic medical units are understandably popular in the hottest warzones but models with breaching equipment – physical and electronic – have found increasing use in bunker-clearance and ship-to-ship actions.

CURs have limited artificial intelligence. They are able to receive and process verbal and visual instructions. Their conversational skills are generally limited though – they tend to be almost exclusively task-oriented. That said, behavioural ‘quirks’ have been reported amongst older or battle-damaged units. 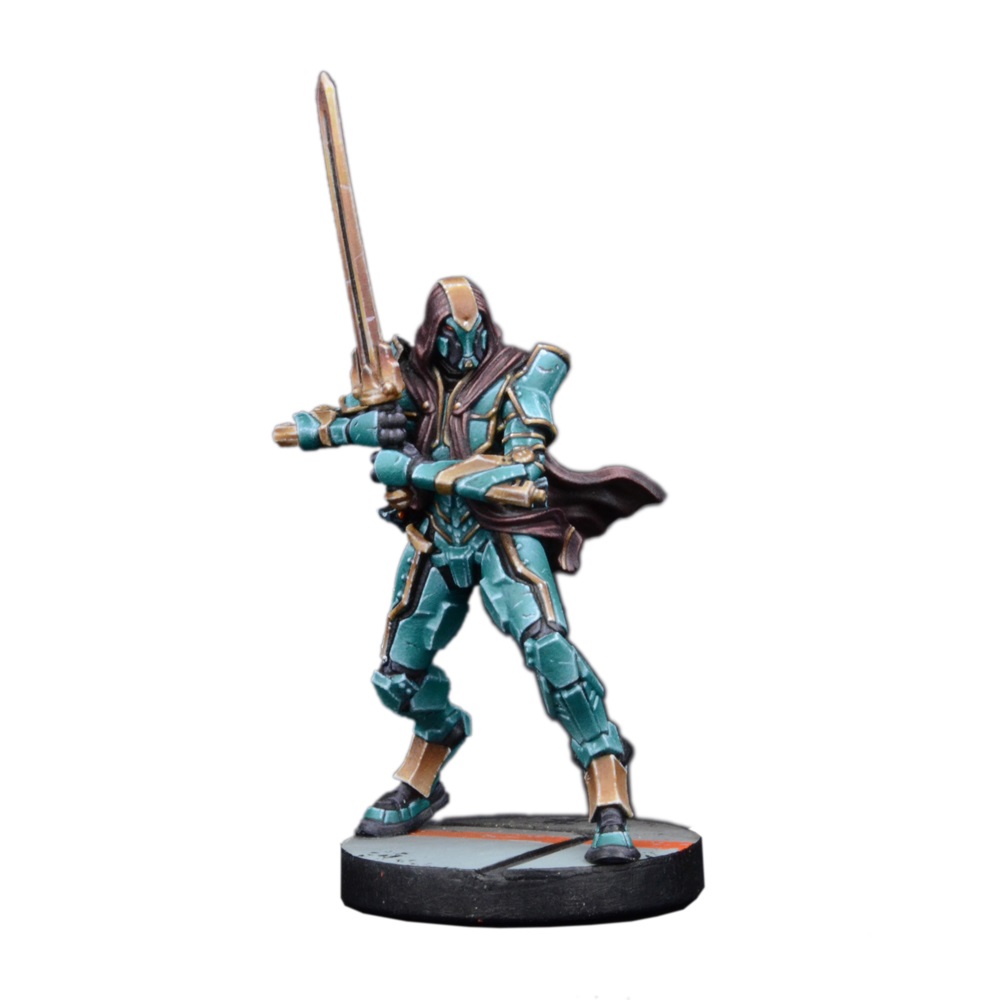 To date, there has only ever been one Judwan recorded as being capable of violence. Given how dangerous Wrath is, this is probably a very good thing. Taken from his home and pod at a young age, Wrath was subjected to a long and arduous training program, similar to that experienced by recruits to the Enforcer Corps and designed to turn him into a killer. The program worked. Too well, perhaps. During his first ‘demonstration’, Wrath broke free from his restraints and killed not only his guards but an observing member of the Council of Seven.

He is now one the most wanted beings in the galaxy. Using the golden jian sword he took from the Council-member’s corpse and clad in the armour he wore on the day he was unleashed, Wrath has become a soldier of fortune, an assassin, and a rogue. He can appear unstable, utterly reckless or even violently unpredictable. But there is a method in his madness. Wrath seeks always the truth of what was done to him when he was young and to have his revenge on those that tortured him. 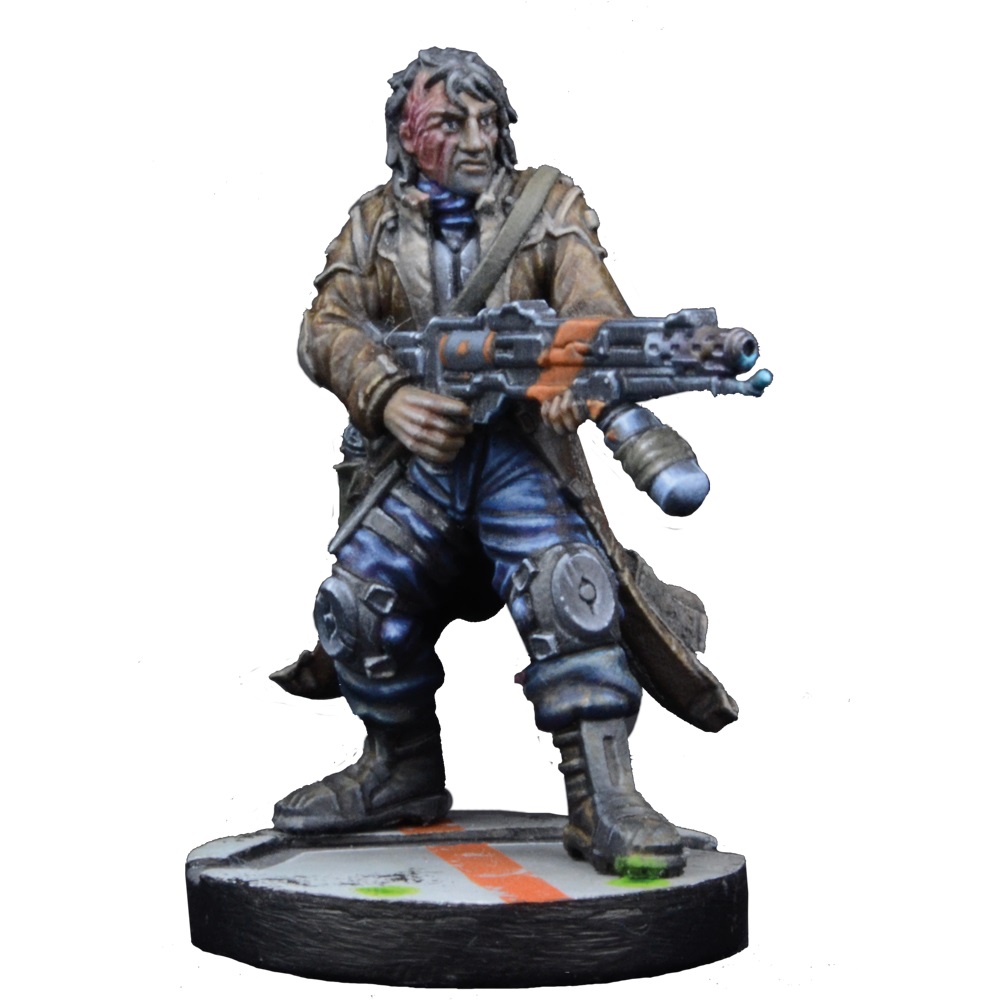 Francesco Selvaggio was once a decent soldier – capable, though not particularly disciplined. He served with a number of different corporate outfits, his highest rank held being a sergeant with Klinser Corp forces in their war on Stone’s World. Selvaggio was a special forces operator with Klinser, having demonstrated a predilection for close combat knife work and demolitions. Klinser’s campaign was controversially thorough, vicious even, but ultimately successful. And yet, Selvaggio was dismissed from the company shortly before their final push into Argo City.

One rumour has it he was involved in a smuggling operation, flying looted art and valuables out of Argo before Klinser could capture them. Another says it was vulnerable refugees Selvaggio was moving offworld. Whatever the actual truth of the matter is, Selvaggio had already earned his nickname, ‘The Devil’, for his part in the fire-bombing campaign that laid waste to Argo’s twin, New Rhodes. Since that dismissal ‘The Devil’ has made his way through the universe working for practically anyone with the credits to pay for his services, be they rebels, corporate snatch teams, or worse. 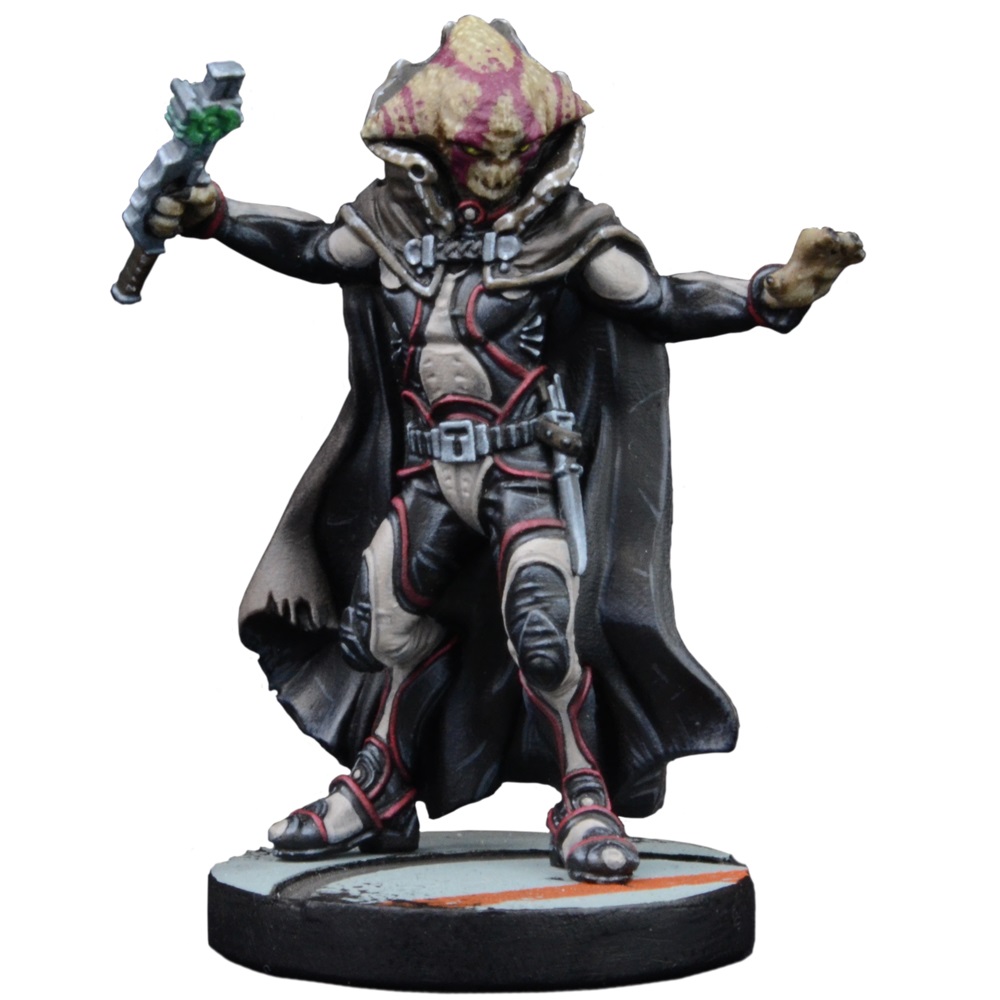 Like so many of her race, Alyse has lived much of her life in the shadows. But Alyse has not done so out of fear. Recruited as a young adult into the Rigel Syndicate, one of the most notorious blade gangs in the Third Sphere, Alyse trained under the legendary Master Tung. She quickly became an expert thief and a formidable fighter, freely applying her ability to drain the lifeforce of her opponents before using it to heal her wounds and those of her comrades.

She views the rest of the Kayowa with a mixture of pity and disdain. While they hide their features with prosthetics or live in seclusion from other races, Alyse feels she has taken ownership of who and what she is. And, while it is still true that others might be distrustful of her, there is no doubt in Blaine’s mind at least, that she will play an important role in the job on Eiras. 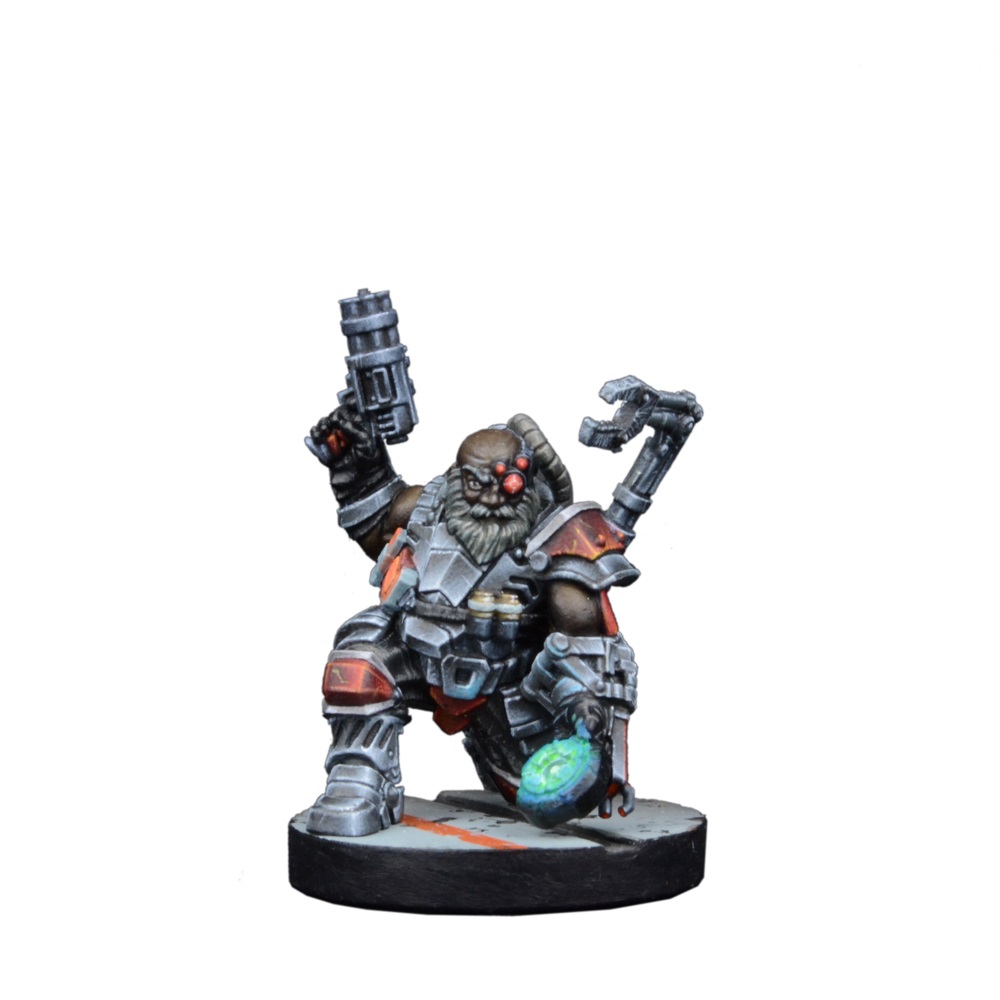 Ogan Helkkare is a rare thing in a vast galaxy: a Forge Father who has made his home within the GCPS. From his workshops on the world of Gelgar II, Helkkare has made a living using his hands and his mind to engineer everything from weapons engine parts. Though he grumbles that neither the materials nor machinery available to him in the GCPS are the equal of what he could find in the Star Realm, his hand-crafted creations are easily superior to anything made by a corporate factory.

Ogan would, in truth, gladly return to life aboard a Ward ship. But, he cannot. He is an exile, spurned by his clan for his part in the disastrous collapse of the Forge Star being built around a star, and doomed to live a life away from his kin and kind. There is more to his tale than a failed career as Huscarl and engineer though, for Helkkare is not his birth name. Ogan was born a Krestursson and is a cousin to Lord Ingulf Krestursson, chief of his clan. Some might once have even said Ogan was the rightful heir to Lord Maggnus Krestursson. But a Helkkare is nothing and holds no titles. All he can do is whatever he must to survive amongst men.

Tomorrow on Star Saga week, we’ll be unboxing the game and showing you all the various contents! Star Saga is on sale now, you can pick it up in your local store or order direct from the Mantic website.