The individual sets for The Walking Dead: All Out War Wave Three are up on the website and in stores now! Today, we thought we’d take a look at two of the newest boosters: Rick, Prison Advisor and Michonne. 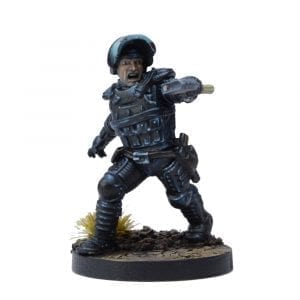 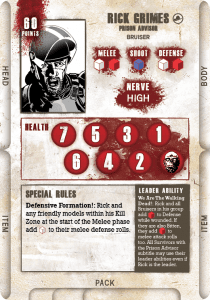 The new Rick is considerably more brutal than his previous incarnation. He still works as a strong leader, but now his abilities affect more of the group around him. He has gained an extra red dice to both Melee and Defence, plus his health has gone up to 7 points. His new leader ability, We Are The Walking Dead! adds extra dice to his group’s Defence if they are wounded and Attack is they are bitten. As with the other Prison Advisors, he can use this rule even he isn’t the leader. Finally, his new Defensive Formation ability allows friendly models within his Kill Zone to add a white dice to their Melee rolls – very powerful when combined with other characters. 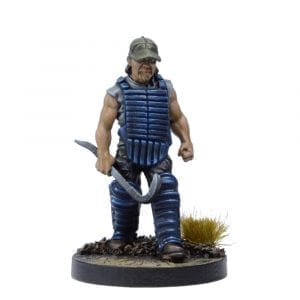 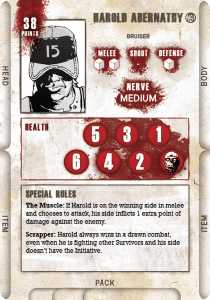 The Rick, Prison Advisor Booster also includes a new character from Woodbury – Harold Abernathy. He is a strong bruiser, aligned to the Governor’s group, with some great abilities. The Muscle allows him to add one extra point of damage in a combat if his side wins. Scrapper basically overwrite the rules on drawing, so that Harold automatically wins all draws, even if he doesn’t have the initiative. This makes him a powerful bruiser to go against your opponents’ fighters of the same level of skill. 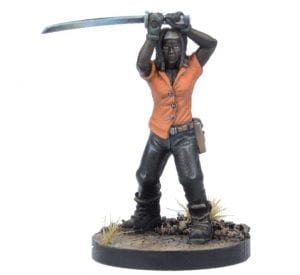 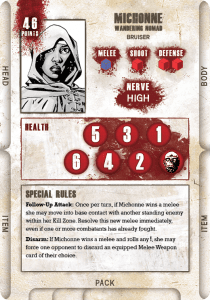 Although we’ve covered Michonne on the blog before, it’s worth going over her pets – Mike and Terry. These Walkers no longer pose a threat to humans and are lead around by Michonne on a chain leash. They both have the same set of bonuses for Michonne – so you don’t lose them if one of the two walkers dies. Firstly, they grant Michonne the Masked Scent keyword, which keeps walkers from engaging her, provided she stays quiet. They also can be discarded to prevent damage from a single attack – which you can do once for each walker. They count as walkers for the purposes of combat, except they cannot attack. They must also remain with 1” of Michonne at all times. Use these to navigate your way through walker hordes to get Michonne into combat with enemy characters and let her do what she does best.

You can pick up these two boosters and add them to your own games now, either from the website or your local retailer.