Tales of Mantica: Edge of the Abyss now available

One thing that we often see requested from the Kings of War community is more background or ‘fluff’ about the various factions vying for control of Mantica. People want to read about their favourite armies taking to the battlefield or discover heroes that have the skill to turn the tide. So, with this in mind last year we entered a licensing agreement with book publisher, Winged Hussar, to create a series of novels based on the world of Mantica. 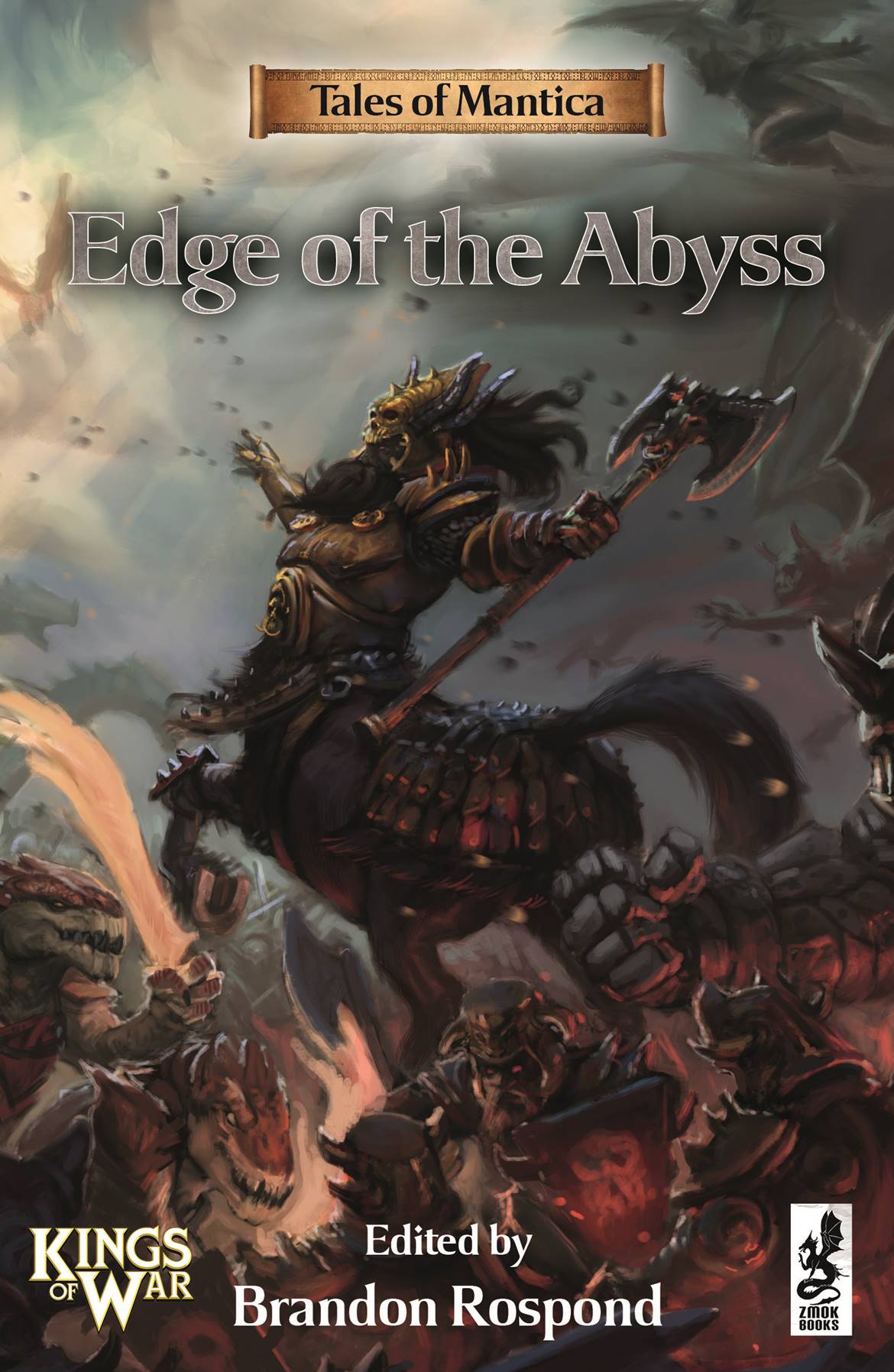 Well, the great news is that after months of hard work behind the scenes, the book is finally available to download or purchase as a physical copy. Edited by Brandon Rospond, Tales of Mantica: Edge of the Abyss is based loosely on the events of last year’s summer campaign, in which the denizens of the Abyss rose up to try and overthrow the Good forces of Mantica. We’ll let Brandon introduce the 10 stories you’ll find inside the book…

This anthology is a collection of ten short stories that span the Edge of the Abyss campaign in the Kings of War universe, covering as many factions as Mantic has put rules out for. Each story has been tailored to fit into the overall lore of the universe, having worked closely with Mantic, as well as unified under my guidance to create one overarching universe for our fiction. Some of the stories we have adapted directly from the Edge of Abyss campaign book, while others may seem very close, but we’ve changed the armies to put our own spin on the battles. Even though the stories can be read in any order, we’ve purposely ordered them as so that the first is the earliest in our narrative, while the last brings the most recent developments. This is but the first of many works we plan to publish in the Kings of War universe!

The Brotherhood is a mysterious order of men that can commune with the power of water through their most highly trained and elite warriors, the Order of Redemption. In Duncan Waugh’s story, “Unfamiliar Territory,” a unit of Brotherhood soldiers, led by a Redemption Knight named Aldous, scout the area by the Abyss, unaware of what horrors have begun to leak onto the world. They stumble upon a bizarre ritual site and are ambushed by Varangur soldiers. Their leader, a man named Gunnar, states that there is a greater evil coming for them; that the men of the Brotherhood must either run and flee the Varangur, or stay and face the darkness, reluctantly, together.

THE SEA DOES NOT GIVE UP HER DEAD BY C. L. WERNER

Some cannot rest, even in death. The pharaohs of the Empire of Dust use the dark powers of necromancy to reanimate the dead to do their bidding, as is the case of C. L. Werner’s story, “The Sea Does Not Give Up Her Dead.” Djwet is a former plunderer who was killed by the hands of the Empire of Dust, only to be brought back to life to serve the bidding of High Priest Nekhbet. Having brought Djwet’s fleet up from the bottom of the sea, Nekhbet orders the skeleton to sail him toward his former home of the Fang Isles so they can build their army. Not willing to let such dark magic sail through their waters, the naiads of the Trident Realm of Neritica board the ships and attempt to stop the dead from reaching their targets.

The Abyss has twisted many creatures, but perhaps none so much more than the dwarfs. Perhaps it is the fact that so many of them live underground, or perhaps it is that there are those that are so easily tempted by the dark whispers. Whatever the case may be, the Abyssal Dwarfs capture the ingenuity and craftsmanship of the dwarfs and combine it with the sickening, dark power of the Abyss. In C. W. Conduff’s story, “Kinship,” Lord Yurec has created a group of dwarfs known as the Traduciators to try to divine the truth behind the dwarfs that go missing to see if they’ve truly succumbed to the corruption of the Abyss. When the latest to go missing is his brother, Durok, the dwarfs travel deeper underground than they’ve ever been. Whatever the case may be, Yurec is ready to face his brother; to bring him back or to strike him down.

THE BEAST WITHIN BY ANDREW McKINNEY

Orcs pillage and destroy; it is as much in their nature as it is to breathe. Such behavior could be blamed on the Celestial known as Kyron, who was responsible for taking the members of the group, collectively known as The Herd, and corrupting them into the beasts we now know as orcs. In Andrew McKinney’s story, “The Beast Within,” the two cousin races collide on the field of battle once more. Many different groups have come to answer the call of the longhorn, Malgar, to stand and defend their land from the destruction of the orcs. Dragyr, his apprentice, has only known his master and is amazed at how many creatures come to protect their wilds when threatened. Can the unity of The Herd defeat the villainous orcs, or will they triumph in burning down the longhorns’ forest?

INTO THE STRAITS OF MADNESS BY ROBERT E. WATERS

To the salamander known as Lukhantl, his brother, Lorquan, is all that he has left. When the latter is taken by Twilight Kin slavers, after losing a bloody battle at Hokh-Man, Lukhantl and his captain take to the seas. While salamanders are often thought of fighting best on the land, Robert E. Waters fights the salamanders against the Twilight Kin in a fast-moving, action-packed naval battle in “Into the Straits of Madness.” Will Lukhantl succeed in finding his brother, or are the ships all going down in flames?

It has now been several months since the Brotherhood and Varangur fought the Forces of the Abyss. News has spread across Mantica of the darkness that the demons bring with them. The Kingdoms of Men have begun work on a giant wall that they hope will act as a first line of defense for their lands. In Michael McCann’s story, “Emerald Eyes,” Commander Cassandra Agrias has been put in charge of overseeing the work, but they have been met with obstacle after obstacle, impeding their progress on the wall at its tail end of construction. After fending off efreets that had bombarded the wall, the men find that the orcs have begun to move on them. Agrias has sent word back to the Kingdoms, requesting more aid, but the response she gets disappoints her. Instead of sending men, ogres have been hired to aid her army. Agrias is hesitant to put her faith in these mercenaries, and her brash lieutenant, Sir Ewan, does nothing but help to antagonize that nagging feeling. But as they bicker, a force begins to move in on the wall…

Dunstan Rootwell is a halfling that resides in the League of Rhordia. Once a rat-catcher, Dunstan now trains his halfling troops in preparation for whatever uses the League has for them. When they are called upon, Dunstan is surprised to find their task is something he has quite a bit of experience in. Hunting rats. In Scott Washburn’s story, “Rat-catcher,” the halfling army travels to the city of Norwood to find that it has no ordinary rat problem; the ratkin have infested the tunnels under the city and have begun striking against civilians. The duke is concerned if this goes on much longer, their entire town will be overrun. Dunstan turns to the aid of his friend, Paddy Bobart, to see if they can find a way to deal with the infestation, and things take off with a bang.

THE LAST STAND BY BILL DONOHUE

It takes a powerful source of magic to affect a dragon to the point of lethargy. In Bill Donohue’s story, “The Last Stand,” Commander Sindfar Greenspar is a leader in a group of Dragon Kin. Even though he does not ride one of the beasts like his exalted brethren, he is tasked with scouting the land ahead to find out why the dragons act as if their flames have been extinguished. Their target is a fortress that was once used by elves of yore as a defensive point, but when they arrive, they find that an old priest is living there, harboring children. The priest, Anselmo, speaks of a great evil that is plaguing the land, destroying the children’s villages as they go. Meanwhile, the undead are on the move. Led by a necromancer named Zar and a vampire lord name Yarik, their crusade against the living grows ever more powerful. Even though Zar seems a pitiful necromancer, he seems to have stumbled upon some power that even makes the vampire shudder with worry.

Out of all of the Celestials that have split into two personas, one of the few that has remained intact is the Green Lady. Under her tutelage, the Forces of Nature protect the land from any that would threaten prosperity of natural life. In Marc DeSantis’s story, “Eyes Unblinking,” Dillen Genemer is a part of a Basilean army that is in search of the Lady’s aid; knowing that the powers of Basilea and the Green Lady combined would stop any foe, they search her to forge a truce. However, before they can reach her, they are set upon by Abyssals, who seek to destroy both forces before they can unite. Dillen is sent forward by his allies to try and find the Green Lady, and when all hope seems lost, he is led to her by the sylph named Shaarlyot. Can he still make it back to his allies in time to save them?

Almost a year has passed since the Abyss split Mantica apart. Someone must unite the people to stand against the darkness. Prince Talannar Icekin has established the wintery capital of Chill, and with it, an army to unite the people of all nationalities, known as the Northern Alliance. Gavin Stalspar is one of the many warriors who fight under the prince’s banner, but his purpose for being there is unclear. While thankful for being given a place to fight and sleep, his thoughts and heart seem distracted. In “Crimson Winter,” by myself, Brandon Rospond, Gavin seeks a purpose, while others around him question what secrets Prince Talannar has laid hidden within Chill.

With these ten stories, we hope to run the gamut of battles for all of the different factions. We hope the gamers appreciate the tales written and can either use these to come up with new ideas for their own armies, recreate the battles described, or even use these as inspiration to come up with tales and adventures of their own. Keep on reading, writing, exploring ideas, and sharing with other players of Kings of War to prepare for the next anthology!