The Walking Dead: All Out War Q&A 2

Studio Manager Stewart took to the Kickstarter Comments again last night, entering into another round of Q&A with backers. Check it out below! If you missed the last one, you can find the answers here. There are only three days left on the kickstarter, so if you want in, you’d better hurry.

Q: Can the expansion’s be used independently of each other or Are the expansions dependent on the contents of each other for game progression? EG if you have Woodbury and want to play the missions, do you need any of the farm expansion content?

A: Good question. The expansions will work in a similar way to the Lord of the Rings ones for anyone that remembers – FotR, TTT, RotK, i.e. that you’ll be able to play a few of the scenarios, but we simply can’t fit everything into the set to play every scenario. The main selling point of the expansions for me is the characters, equipment and extra rules that you get (for example a new supply deck for the prison so you can find things like riot gear around the board). To tide you over until you’ve collected every character you need for every scenario, all of them will be playable as points matches so you can swap out characters for ones you do have. 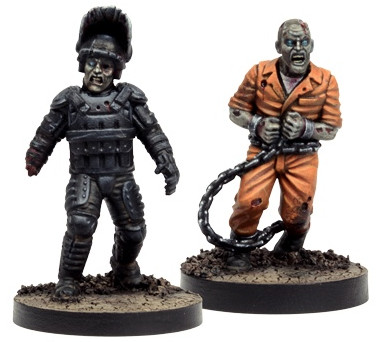 Are “mission objective” equipment cards a possibility? These would help in scenarios.

A: What exactly do you mean by mission objective cards? There may be missions where you need to collect a certain item – if this is a piece of equipment you will get the card, but it may sometimes be a counter, in which case we will include it in the set.

Q: Can we have some more details on character creation and campaigns please?

A: Absolutely, although it’s a very broad subject, so please say if you want to ask something specific. Character creation will be done with a simple points calculator to add up your chosen stats and abilities. Mark is finalising that at the moment so I don’t have the full details but I will do a post on them once I have them. During a campaign, surviving a game will give a character a bonus red die to allocate to their stats. At any time, you can swap two reds for a white, or two whites for a blue. You can swap any three dice for a Nerve increase. No stat can have more than three dice. That’s the basics – not fully fleshed out yet. You will also gain income based on the supplies you’ve collected, and this can be used for buying new equipment. The next bit we’re working on is the chances of meeting new survivors between games to expand your group.

A: 1 and 2 – see previous answer. 3 – there will be rules for combat in buildings. We will keep it fairly simple for the core game, so there will be walls and doors and things, but no more detail. When we get to locations where buildings become more integral to the story we will add extra rules to represent that. They’re not fully written yet, so we’re happy to take suggestions!

Q: Chris said earlier we will be getting a new rules download with different characters, what new characters will be included?

A: I’ve got a first draft of the rules for most of the characters through now – I’m aiming to put out a selection of different types to create a couple of varied forces – enough for a 200pt game or so. I haven’t decided which yet, so I’m happy to take requests. I think Tyreese would be interesting…

Q: There are around 150 named and around 100 unnamed peoples in the comic from #1 till today, do you plan all to make as minis?

A: Pretty much, yes. Within the scope of this Kickstarter we’re only planning to go as far as issue 48 (with a few extras…), but we have included every named character up to that point as far as I know. Assuming the game continues to sell well at retail we will go through the rest of the story too :-). 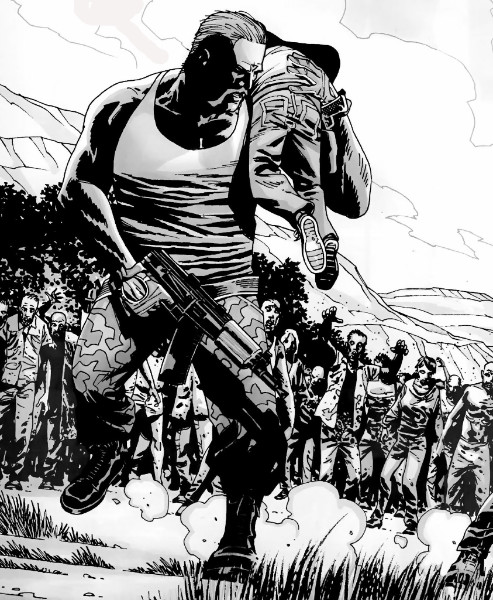 Q: Thanks for the answers! Leveling sounds interesting. When you say “you can swap X dice for Y” do you mean in between scenarios? or actually do that on the fly during the game?

A: Swapping dice will be between games, not during.

Q: Please give us rules for Andrea, Dale, Michonne and Tyreese, plus some of the characters from Woodbury like Martinez, Gabe, Bruce, Lily and the Gov (either version) )

A: Good suggestions, I’ll see what I can do. 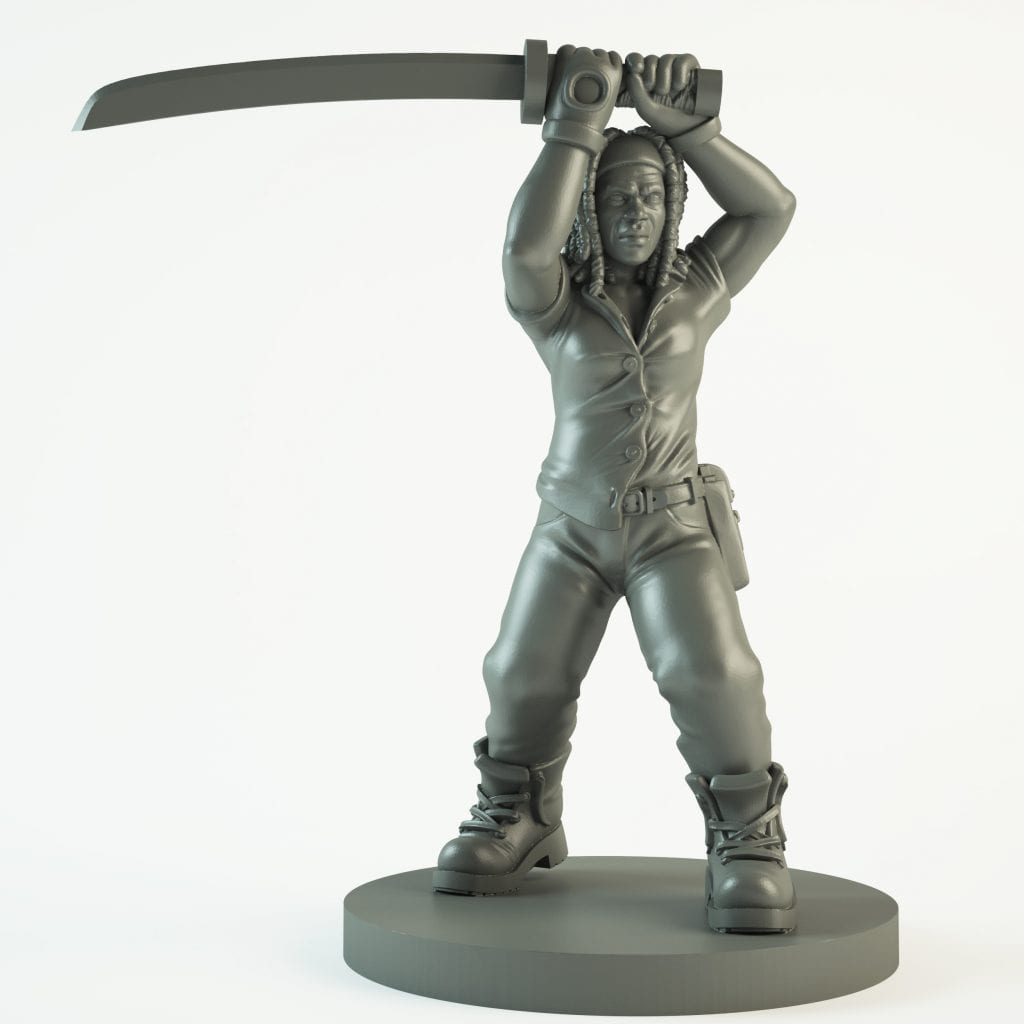 Q: I’d like to see Michonne stats before Tyreese, especially if you are doing anything with her walker pets. For testing purposes, I’d like to see low point characters to see if a “swarm” build is abusive to the system.

A: We are planning on doing things with Michonne’s Walkers, Mike and Terry. Mark and I were talking those through yesterday. They will work in a similar way to the “Gory Clothing” equipment card in that they stop Walkers from attacking the owner (at least at low threat levels…). Good call on including low point characters – I’ll include some of those in the test batch.

Q: Will we be seeing a pregmant Lori in this campaign?

Q: How will the concept of survivor death affect a campaign? And what happens, if death is permanent, when a player can’t field enough to make the scenario balanced- or is a campaign only a solo/co-op endeavor?

Also, if survivor death is permanent, can you have survivors flee the scenario to hopefully stick around for the next campaign scenario?

A: I haven’t had the full rules through from Mark yet so I haven’t seen how we will deal with dead characters, but from what we’ve talked about so far most characters will be able to recover. Those that have been bitten (which will be a little more rare in the next rules update, as you’ll know if you are following the feedback thread) will be more likely to die, but there are always amputations… We’ll come up with an underdog system for players who have taken too many casualties.

Q: Can a character change roll over the course of a campaign? like can a marksman become a tactician or a runner become a bruiser, that sort of thing.

A:  Good question about character type changes. I don’t think that’s in there currently, but we’ll see if it’s worth adding.

Q: Regarding solo/Co-op play, do you have plans to develop AI for non-walker encounters? Wild animals, other survivor groups, Weather, etc?

A: Competitive gaming – we are intending to have a tournament scene for this game – I think the small size of the forces and the way that they are collected make it perfectly suited. We’ve designed an Organized Play kit to be sent out to all the stores, with exclusive prizes and cool stuff, and we will host events everywhere that we can :-).
As for other AI stuff, we aren’t planning to do anything with wild animals or other survivors, but we do have a few weather cards in the event decks in the expansions. For example, there is a Thunderstorm card in Atlanta that will raise the threat, reduce visibility, and render any gory clothing cards ineffective…

Q: I heard something about possible other conditions like night scenarios where lighting may be a factor. Any comments on that?

A: I haven’t seen any night rules just yet, but that’s not to say we won’t have any further down the line.

Q: Give us enough character sheets to field a full Woodbury force with the update

A: I don’t think we’ve finished all of the Woodbury characters yet, but you’ll be able to bulk out the force with Derek’s group for now. 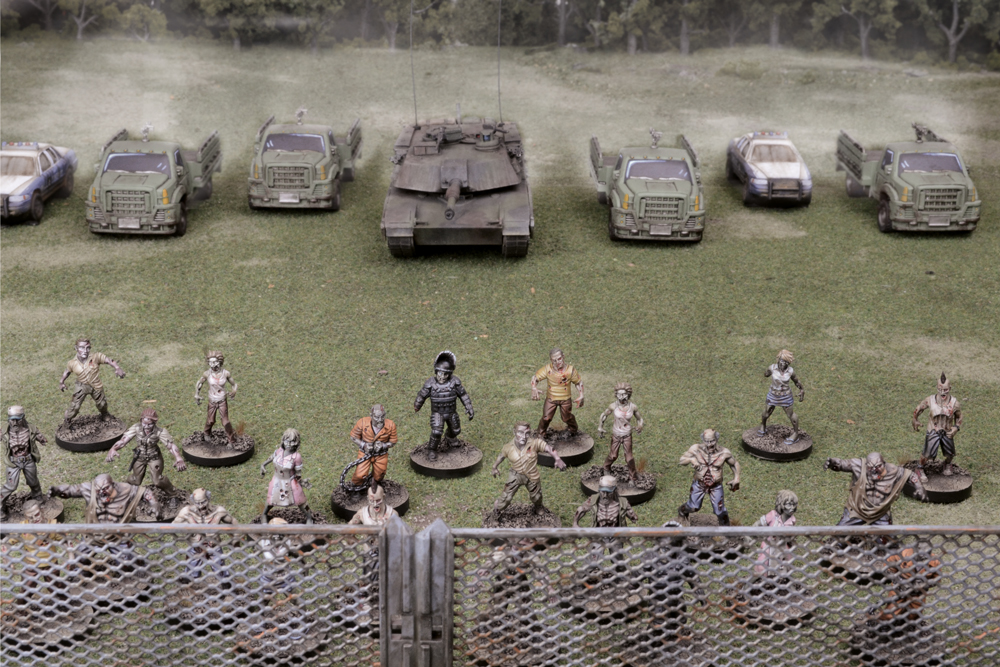 Q: Outside of the IP, how do you plan to differentiate this from other popular zombie themed games (which seems to have a new one pop up every week)?

A: IP aside, I believe the gameplay and group-building is what really sets this apart – I think the wargame-style army list feel is an exciting concept, and the combination of the AI with the noise and threat mechanics make this very different to play. I’m a big fan of PVP games, and tactically using the walkers to outwit your opponent is an interesting twist.

Q: What scale are the vehicles and will we see a winebego?

A: The vehicles are scaled in line with the miniatures, as per the image in the update. They are approximately 100mm long by 45mm wide. We won’t be making a Winnebago ourselves, but you only have to read these comments for five minutes to find one of the many that people have posted up!

Q: You have said things like fighting at night haven’t been covered, but with things like the thunderstorm card how about rules for weather effects like snow, rain, mist etc?

A: We will look at other weather rules as we flesh out the expansions. There are a couple of references in the comics to walkers being slower in the cold, and the Wiltshire Estates part of the storyline is set in the snow, so we could look at that.

Q: Do you think you could draw up some quick and simple rules for me to use Shiva in my games? I have been trying to figure her out but I cannot get my head around her despite draing up rules for about 20 other characters so far, lol!

A: We haven’t got as far as Shiva just yet – we’ll have to come back to her later

Still can’t get enough of The Walking Dead: All Out War? We’re in the final week of the Kickstarter campaign, so pledge now!