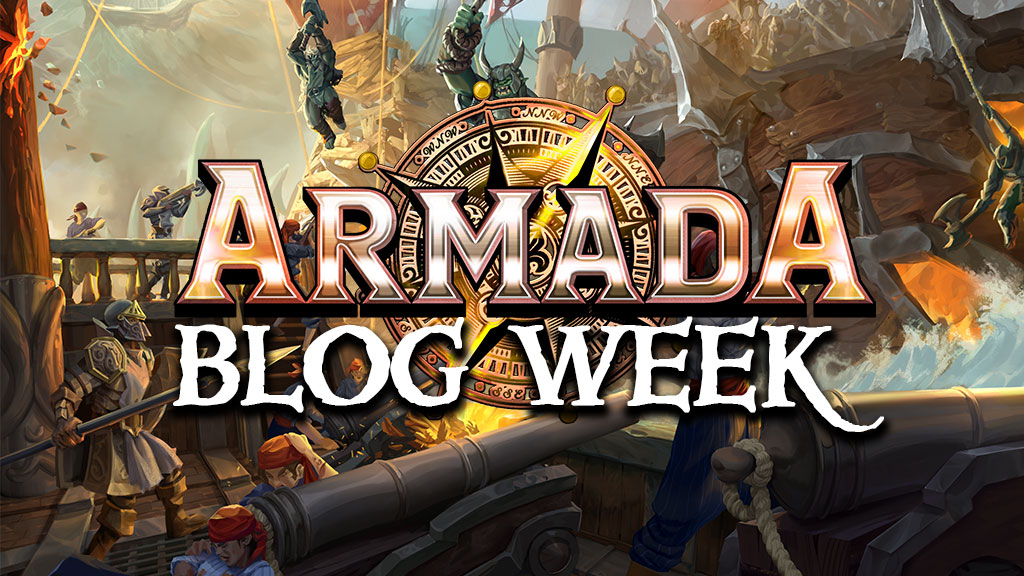 Today we delve into the Novel Pious by Winged Hussar for a great Naval tale, so pull up a barrel and get yourself comfortable.

The starboard guns of the smasher exploded into life, an ill-disciplined ripple of cannon fire blasting haphazardly from the far side of the orc ship. A mere second later, the sloop exploded, the beautiful lines of the small ship replaced in an instant by a fireball of black, tinged with yellows and oranges, blossoming up toward the clear sky and spitting out twirling shards of broken timber. Charn screwed his eyes tightly shut and hung his head, as if that would somehow undo the horrific display of firepower he had just witnessed snuff out the lives of some fifty Basilean sailors. Even from half a mile away, he could hear the guttural chanting, rhythmic banging, and cheering from the orc vessel off Pious’s starboard waist. He opened his eyes again; he looked down at the gun crews visible in the middle of the upper deck and all the way forward on the fo’c’sle. The experienced sailors continued loading their guns regardless, while a handful of the landsmen stared in disbelief at the blazing wreck a mile to starboard before their gun captains screamed them back to action. “It hit their powder magazine,” Gregori muttered quietly to Francis Turnio, the young midshipman assigned to the quarterdeck as the captain’s runner when cleared for action. 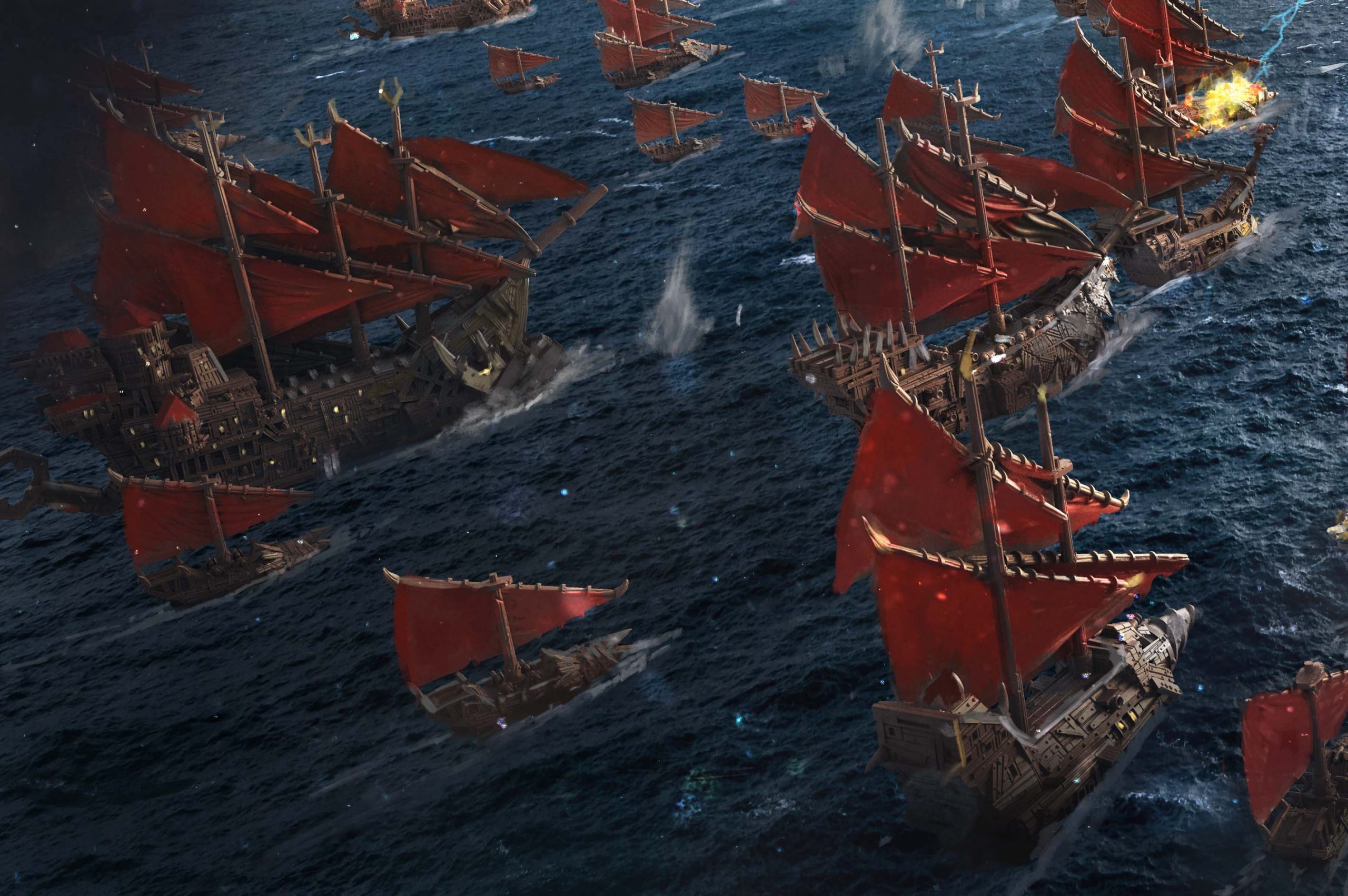 “Poor bastards.” “They got too close!” Charn snapped. “And we may suffer a similar fate if we do the same!” “Sir?” Gregori asked. “Should we load bar shot? Rip up their rigging and leave them floundering?” “Have you heard a damned word I just said, sir?” Charn exploded. “Those bastards have still got a deck full of close in cannons that we are still yet to see fire! And it wasn’t those that took out that sloop; it was their heavy guns the deck below! So no, Mister Corbes, I am not closing range with that vessel so that I can fire bar shot and he can demonstrate his entire broadside, rather than the mere half we are seeing at this range!” Charn immediately regretted his aggressive outburst at his most trusted subordinate, who had merely offered him a tactical choice. He regretted that outburst infinitely more just a moment later when the orc smasher’s port broadside opened fire. The side of the orc warship momentarily disappeared in a cloud of black smoke as the heavy guns fired; not the precise combined shot Pious 16 of a Basilean warship, but an almost random series of explosions as the guns spat out their lethal shots. A series of dull whooshes followed the blasts for the merest fraction of a moment until the entire quarterdeck shook violently, knocking Charn off his feet. Splinters of wood the size of limbs twirled through the air around him, a body flew past somewhere in his peripheral vision, and the screams of wounded men surrounded him from seemingly every direction. 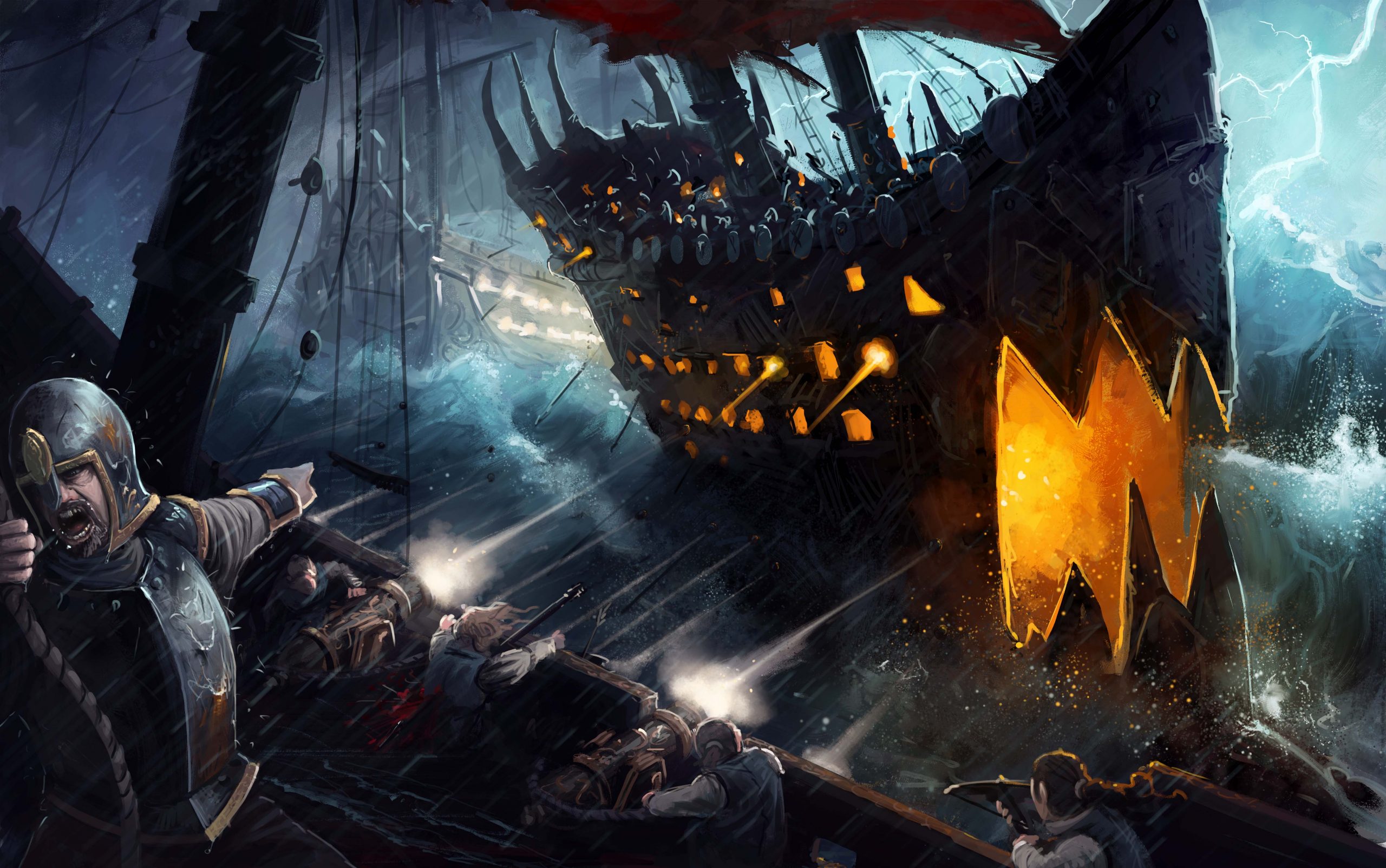 Mortified at the thought of being seen prone on the quarterdeck of his own warship, Charn fought through the dizziness and nausea and leapt back to his feet, checking around him to assess the extent of the damage. Pious’s starboard quarter was torn open; the wooden deck smashed and two of the cannons knocked off their shattered gun carriages. One had fallen onto two sailors who were now trapped screaming below the three ton weapon; another poor soul who had evidently directly taken the impact of a cannonball now lay in two halves, his blood and entrails scattered across the splintered deck. Another half-dozen sailors lay dead or wounded. Midshipman Turnio stood frozen in place, transfixed as he stared at the corpse of the sailor torn in half at the waist. 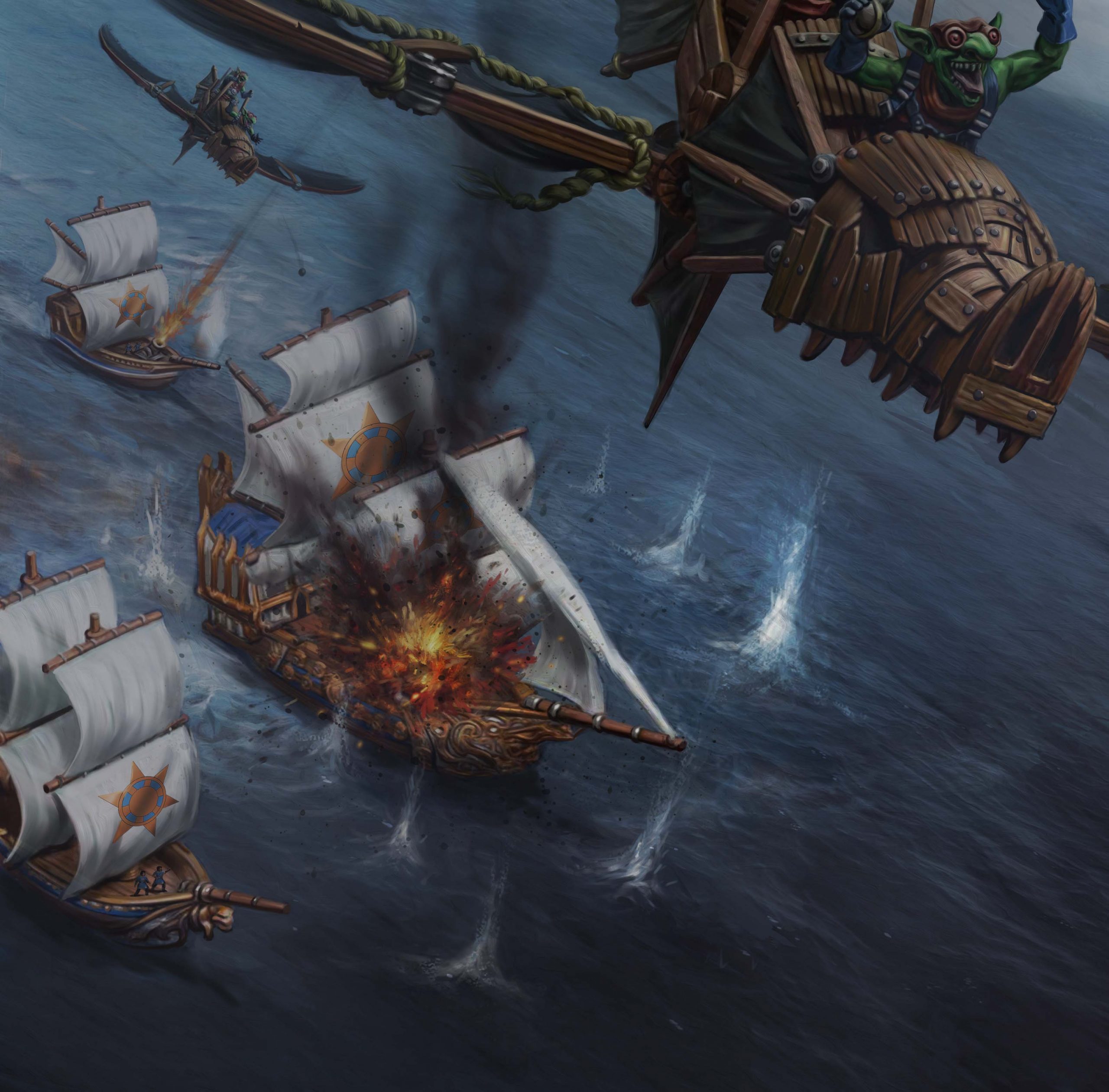 Behind him, Lieutenant Corbes lay crumpled on the deck in a pool of blood, rapidly expanding to soak up the sawdust that had been scattered across the deck before the battle commenced. Charn opened his mouth to bark out a command but was overruled by his own guns as a colossal broadside spewed forth from the deck beneath, firing another salvo of round shot into the towering orc ship to starboard. “Mister Just!” Charn yelled over the din of screaming men as the gun crews on the quarterdeck struggled to lift the cannon that had trapped two of their shipmates. “Keep station on that orc bastard! Don’t let him close the gap!” “Aye, Captain!” Thaddeus yelled in response from the far side of the quarterdeck. “You there!” Charn pointed at a young rating standing by the nearest gun on the quarterdeck. “Take Mister Corbes below! Get him to the surgeon! Quickly!” The young sailor dashed across to the wounded lieutenant and slipped an arm around his waist, struggling to raise him to his feet. Charn saw Gregori’s legs move slightly in response as he attempted to assist his own helper, slowly struggling up to one knee. One arm was wrapped around his waist, but even with the heavy sleeve of dark blue intervening, Charn could see the vivid extent of blood that stained his white shirt and blue breeches. The pale-faced officer looked up at his captain as he slowly struggled to his feet. He knew.

If that has you yearning to read more, you can pick up the Novel from our webstore in softback or digital form.

Ahoy there captains. Seas Aflame is a supplement book for Mantic’s game of epic naval warfare: Armada. Take your games of Armada to the next level! With ten new scenarios, rules for fliers and fortifications as well as a full campaign system, the book also expands on the naval background in the world of Pannithor and introduces the next wave of fleets to be released for the Armada game.