Thursday Fluff – Warpath Universe – The Stellar Geography of the Corporation

The Stellar Geography of the Corporation

The Galactic Co-Prosperity Sphere is vast, the mightiest power in the galaxy, a technologically advanced empire that encompasses a huge tract of the Milky Way galaxy. It contains hundreds of thousands of star systems, and well over half a million inhabited worlds, orbital stations, moons, asteroids, deep space facilities and other, more esoteric places; although this is but in truth an estimate, the Corporation dwarfs the other political entities it shares the stars with.

The Corporation centers on Sol, the home star of the human race. Earth, the planet from which Homo Sapiens sprang, is long reduced to rubble, the other Solar worlds abandoned for more hospitable climes. Nevertheless, Sol remains the spiritual home of mankind. Already the GCPS encompasses most of the Orion Spur, and a significant chunk of the Sagittarius and Scutum-Centaurus Arms of our galaxy. New expansion is taking place in the main in the Norma Arm and the Galactic core Sol-wards from the Forge Father realm, and out across the inter-arm gulf separating the Orion Spur from the Perseus Arm. Beyond lies the final arm of the Milky Way, and into that few Corporation Vessels have as yet ventured. 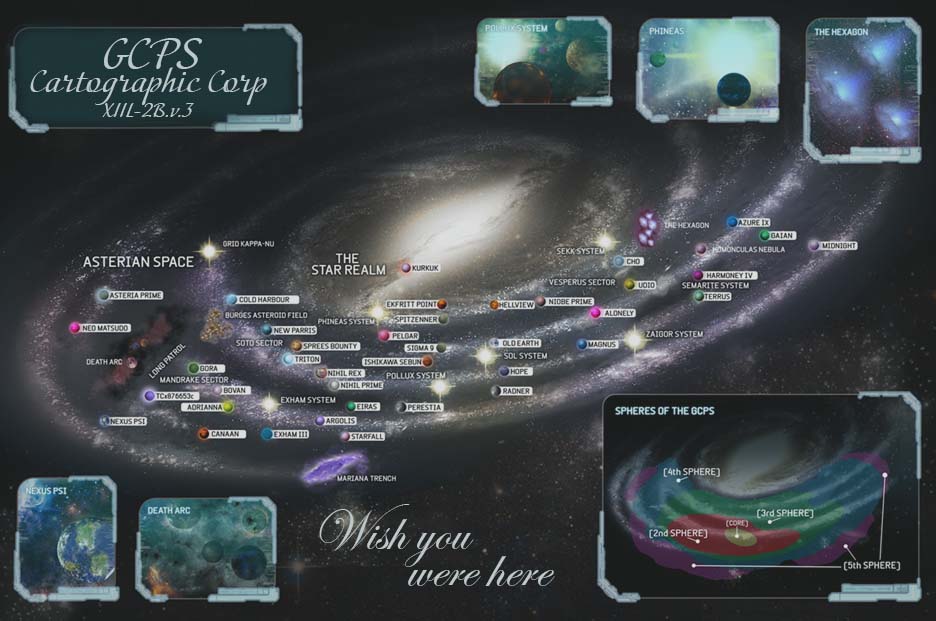 In shape the Geography of the corporations empire, is far from a sphere, the GCPS resembles an elongated kidney, nestling against the blazing heart of the galaxy.

There are a multitude of different world types within the GCPS, ranging from lush paradise planets to grim, over-populated industrial centers to airless rocks. There are mining outposts, research stations, off-world factories, gambling resorts, asteroid mansions, game preserves, tax havens, and other installations without number scattered the length and breadth of the heavens.

Humans can be found in every imaginable place, be it the upper layers of gas giants or the deepest ocean. Naturally, there has been a great deal of genetic divergence – both natural and forced – in response to these environments and what might call itself “human” on one world would be regarded as an abomination elsewhere. There are humans who have returned to the sea, space-faring men and women whose bones, made brittle by generations of zero-g living, would break under the mildest gravity, humans who have adapted to poisonous atmospheres, cyborgs, mutants, post-humans, self-identified human robot citizens and more. Genetically pure humans with no modification excepting those required for medical reasons are discriminated positively for, and hold the majority of the GCPS’s wealth and power. Nevertheless, there are a growing number of groups, inspired by the open, military defiance of the Rebs, agitating for real political change.

The GCPS is roughly divided into five spheres. The boundaries between them is by no means absolute, they change over time as the GCPS expands, and bickering over which planet lies in which zone takes up much valuable time at Corporation Central. Some worlds lie within one zone, but for taxation purposes and so forth are counted as being in another. Nor are the spheres spherical at all, rather they resemble a nested set of blobs, marred by dents, thinnings and extrusions. It is a very simple geographic model that is in practise bewilderingly complicated. Initially, the zoning was based on how many “jumps” were required out from Sol, with the original boundary of the First Sphere lying seventy jumps out from Earth. The McKinley drive rendered both short-jumping and this form of reckoning obsolete, but some of the most venerable worlds insist on its use to this day, a self-important mark of exclusivity.

The spheres are designated so: 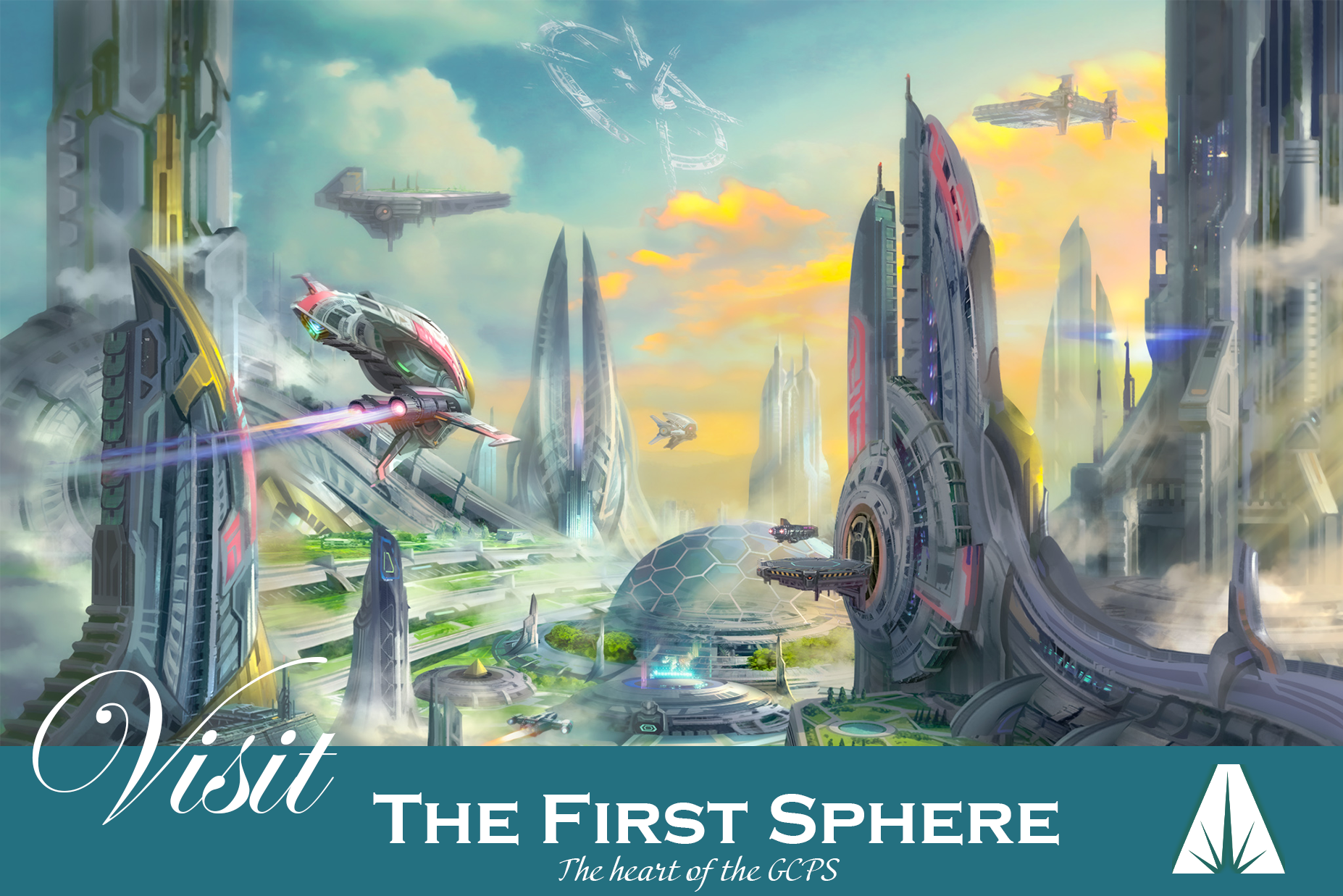 The First Sphere, or “The Core Worlds” is the heart of the GCPS, a rough ball of star systems about one hundred and fifty light years across that represent the first diaspora from Old Earth. The worlds here are so long settled that they are highly developed, civilised places. They represent the acme of Corporation culture, genuine heavens on Earth for those that can afford to live there, where high technology allows people to live lives of unfettered pleasure. When corporate spokespeople approach a new alien race with the offer of incorporation, it is to the lifestyles of the core worlds that they point, although what the hapless aliens receive is another matter entirely. Starships come from all over the GCPS to supply the Core, its population long since having outstripped its own worlds’ capacity to support it. Society is nominally egalitarian, if you ignore the massive armies of migrant non-Core workers who flock here to serve the idle rich.

The Second Sphere, or “The Outer Core” is similar to the core, but less developed, and where social inequality is far more pronounced, nevertheless, the Second Sphere is where many GCPS citizens aspire to live when they strike it lucky. Think of it like the leafy suburbs of the GCPS, the dream retirement location or place to start a family.

The Third Sphere, or “New Space” just beyond the Second Sphere, space becomes more regionalised. Large tracts of unsettled systems separate star clusters inhabited by “nations”. Here. many corporations run star systems jointly, each specialising in a particular industry. Often there are two or three highly developed worlds at the cores of these “nations”, each supporting and supported by numerous smaller settlements. In this, they are like the GCPS in miniature. The Third Sphere was settled rapidly at a time when mankind had perfected the art of genetic manipulation, and the pioneers to this zone tended to change themselves rather than the planets they found, leading to some of the more outlandish variations on the standard human phenotype. Life on the capital worlds of these systems is good, and some of the more established have been nominally included in the Second Sphere. Much of the worlds in the Third Sphere have been settled for centuries, the term “New Space” comes from a time when the Third Sphere was the frontier of the GCPS.

The Fourth sphere, or “The Expansion Zone” is still being surveyed, and new worlds uncovered. There are opportunities aplenty for corporations and individuals alike, and many risks. Unknown alien species, pirates and weird cosmic phenomena are but the least of concerns for those embarking on new ventures. Fortunes can be made or lives lost equally easily in the Fourth Sphere. Those parts of the Fourth Sphere close to the realms of others are subject to periodic invasion, while the majority of the Dead Zones caused by The Plague are to be found in these parts. Nevertheless, hundreds of new planetary licenses are issued every year to corporations who wish to exploit worlds in the Expansion Zone. 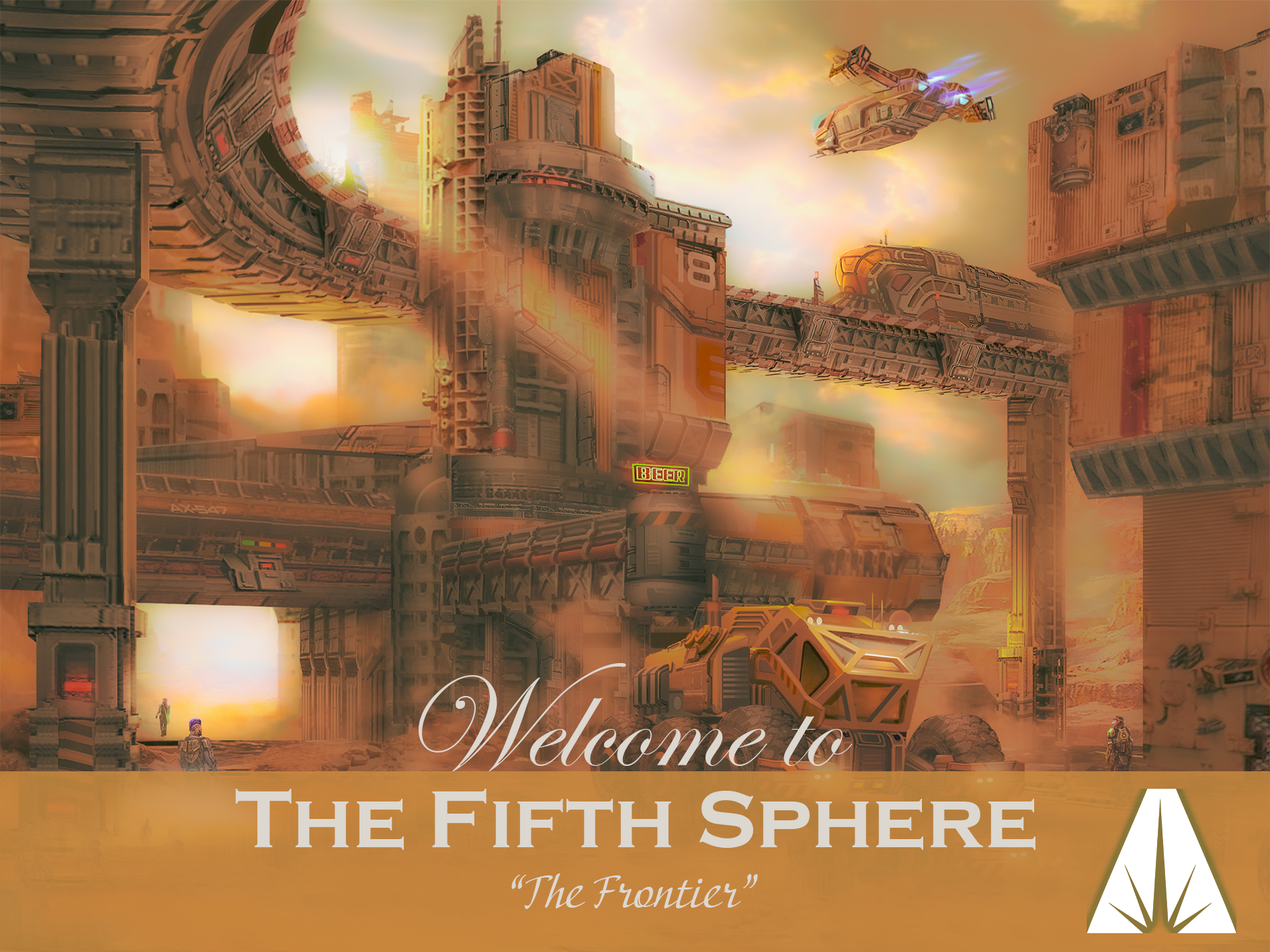 The Fifth Sphere, or “The Frontier” the actual edge of the GCPS. Claimed by Corporation Central, the influence of the the GCPS is minimal this far out; and the species that live here would take violent exception to any mention that they were in Corporation Space at all. It is a realm unknown, where advance scouts hurry from star to star, hunting out new planets for their corporate masters. In places, the Fifth Sphere is squeezed thin as the GCPS brushes up against the territory of other mighty realms. Elsewhere it is an active warzone. Many threats and unknown terrors lurk beyond the Fifth Sphere. Corporation Border Stations, unusually funded directly by Corporation central, keep watch, while swift fleets of Enforcers patrol the endless black. The Rebs keep their own bases here, watching the Enforcers watching for them.

Most of the GCPS’ deployments are within their own borders – supressing civil unrest or eradicating insidious alien incursions. In the tight confines of the city sprawl, troopers are equipped for close quarters. Shotguns and Suppressor shields, backed up with TAC drones yield reliable yet brutal results.

Each of the tens of thousands of corporations in the Co-Prosperity Sphere maintains their own military – hundreds of thousands of armies with millions of soldiers. At any moment there are uncounted wars somewhere in the galaxy, and the forces of the GCPS are ready to fight them all.

GCPS troopers are drafted from the riff-raff and the mean of the Co-Prosperity Sphere and trained until they’re the envy of any army.