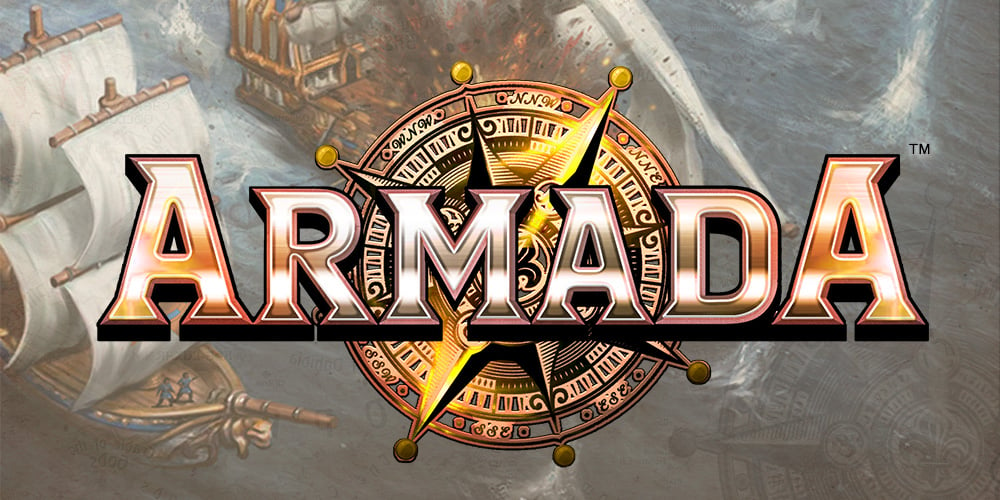 Continuing on with Armada month, we got hold of experienced Captain and boatwright Maciej and asked for what he believes to be the top ten ships in this great game of naval warfare!

My name is Maciej and recently I got asked about my top ten Armada ships.

Below you will find my choices, these are in no particular order except for the Monolith of which I am very much biased towards and is my personal favourite! With the Empire of Dust I believe it’s all about durability and raining Indirect Weapons on top of the enemy fleet.

The Monolith excels in both, packing an already solid pair of Indirect weapons that can be further enhanced with Additional Broadside and Balefire upgrades. Thanks to Indirect weapons being broadside mounted, this XL ship is a beast both at range and up close.

Plus it has a really iconic Empire of Dust look. Definitely my favourite ship to field of late. 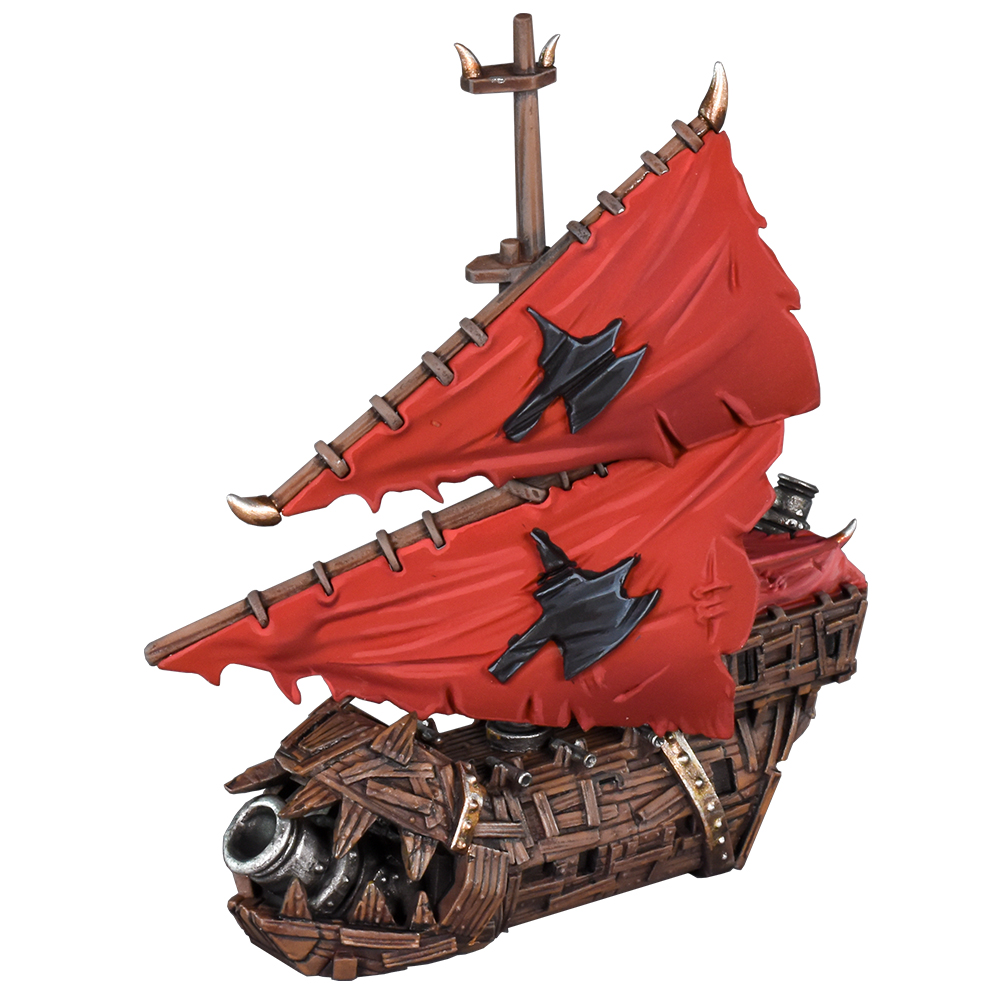 Contained within a relatively small hull lurks a real beast of firepower and devastation. The Bombboats are truly a masterpiece of Ork (or rather Goblin) engineering.

These small ships not only look great, but carry such immense firepower on all sides, there’s really no way for enemy ships to emerge unscathed. My favourite strategy is to move them full steam, right up the middle of the enemy fleet, then swing around, straight behind the enemy lines – all the while shooting with its plethora of weaponry.

A bombboat that did not fire all its weapons during a single activation is a Bombboat wasted! 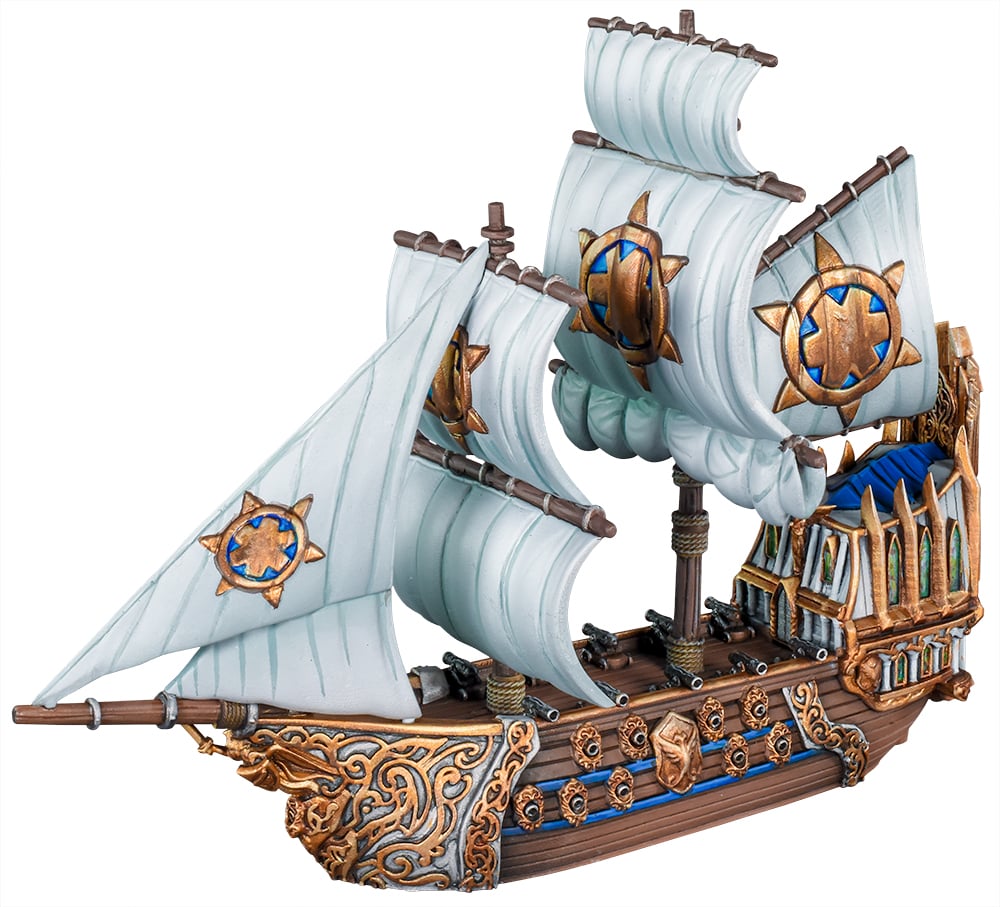 The Abbess is in my opinion the very peak of the Basilean navy. It is fast, durable, has some great maneuverability thanks to a Red Turning Arc, solid firepower and just enough Upgrade capacity to properly buff it up.

On top of that it is relatively cheap to field, looks beautiful and thanks to its large size, it ticks all the Basilean synergies boxes.

My favourite build includes a Blessed Hull, Veteran Crew and a Sloop Squadron nearby, guaranteeing additional 10SP restored on each Repair action. 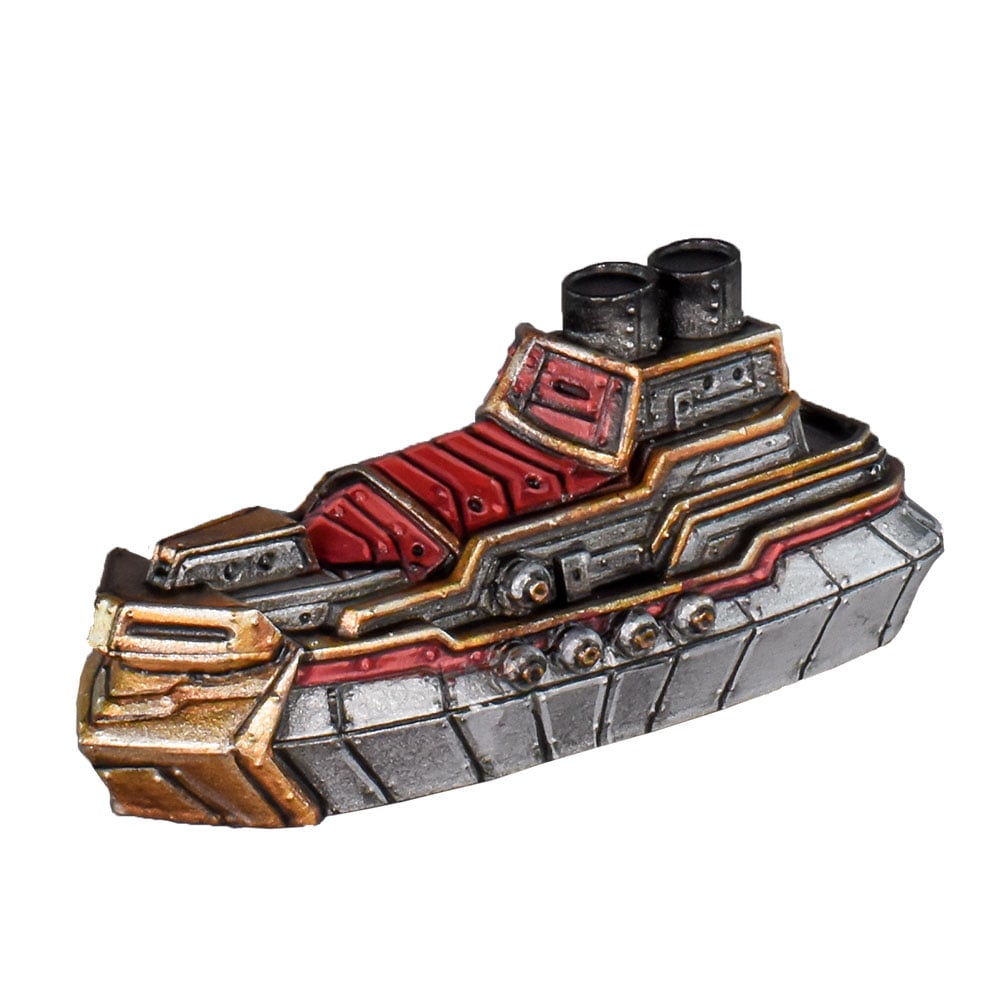 They might seem overshadowed by all of the largest Dwarf ships, but take enough of them and you have a list built around murderous, Point Blank Rakes with a high Critical Hit chance!

These tiny monsters are so agile and fast, there’s really no way to contain them on the board. Be it harassing much larger ships, completing objectives or blocking enemy fleet manoeuvrability – Hunters are capable of all of the above and more. 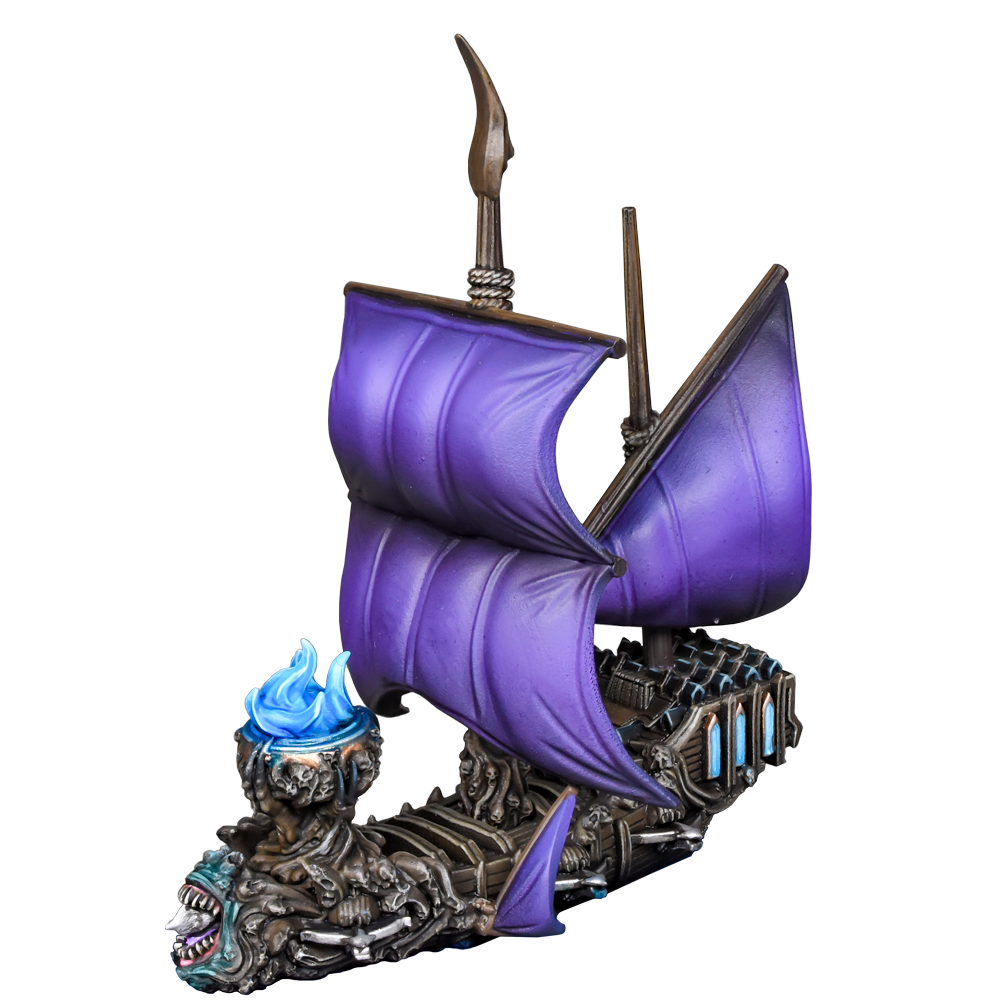 The Twilight Kin is packed with interesting ships and game mechanics. Still it is difficult to argue against pure stats and damage output.

A Heartseeker is an Assassin on steroids, losing a single frontal Close weapon in favour of increased Crew Strength and durability. Whilst I do not currently play this faction, I have always looked at their named ship with jealousy. 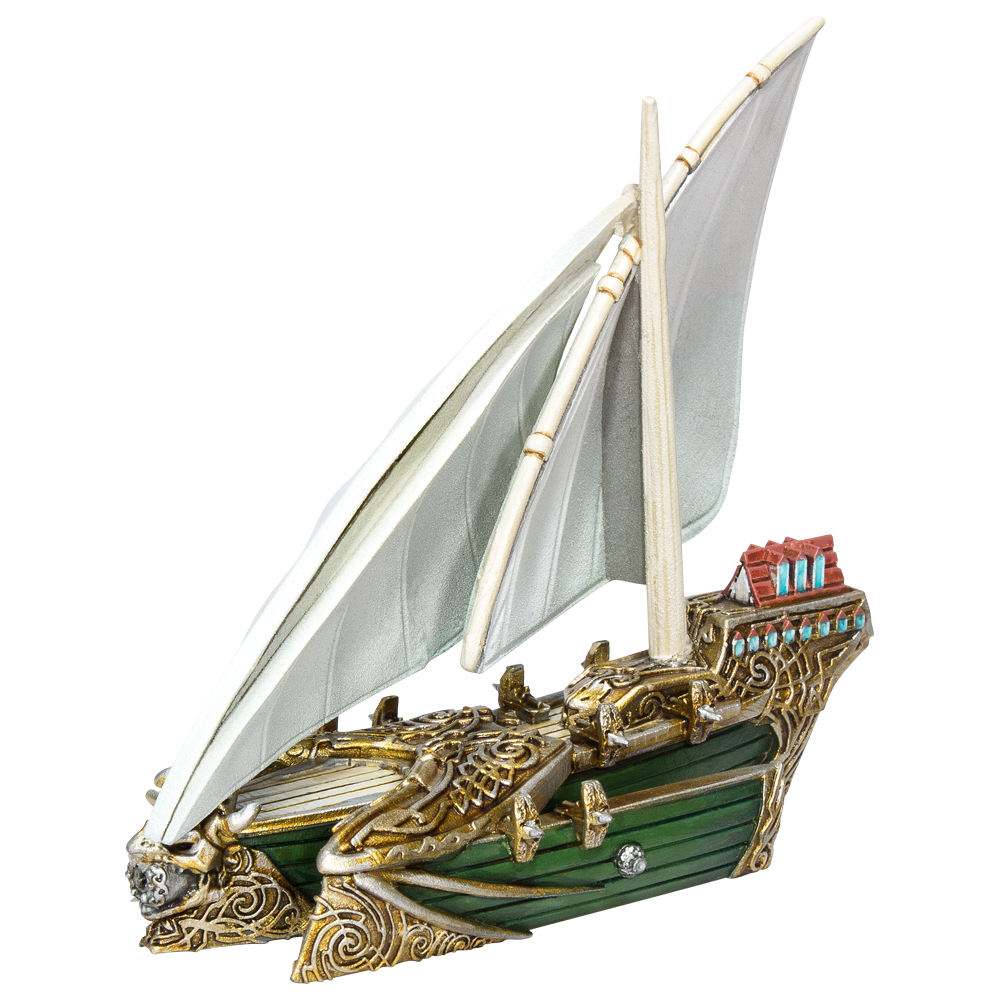 A medium size Elf Main Battle Ship, that is full of surprises. For 32 points we get a ship that is extremely fast and agile, but also packs an Indirect weapon at its bow. Add to that an array of regular weaponry on each side and a massively potent Fire of Retribution rule and you have a close quarters killer like no other.

Fast approach, point blank fire against multiple targets and some Blaze markers left behind while moving out of harm’s way itself. 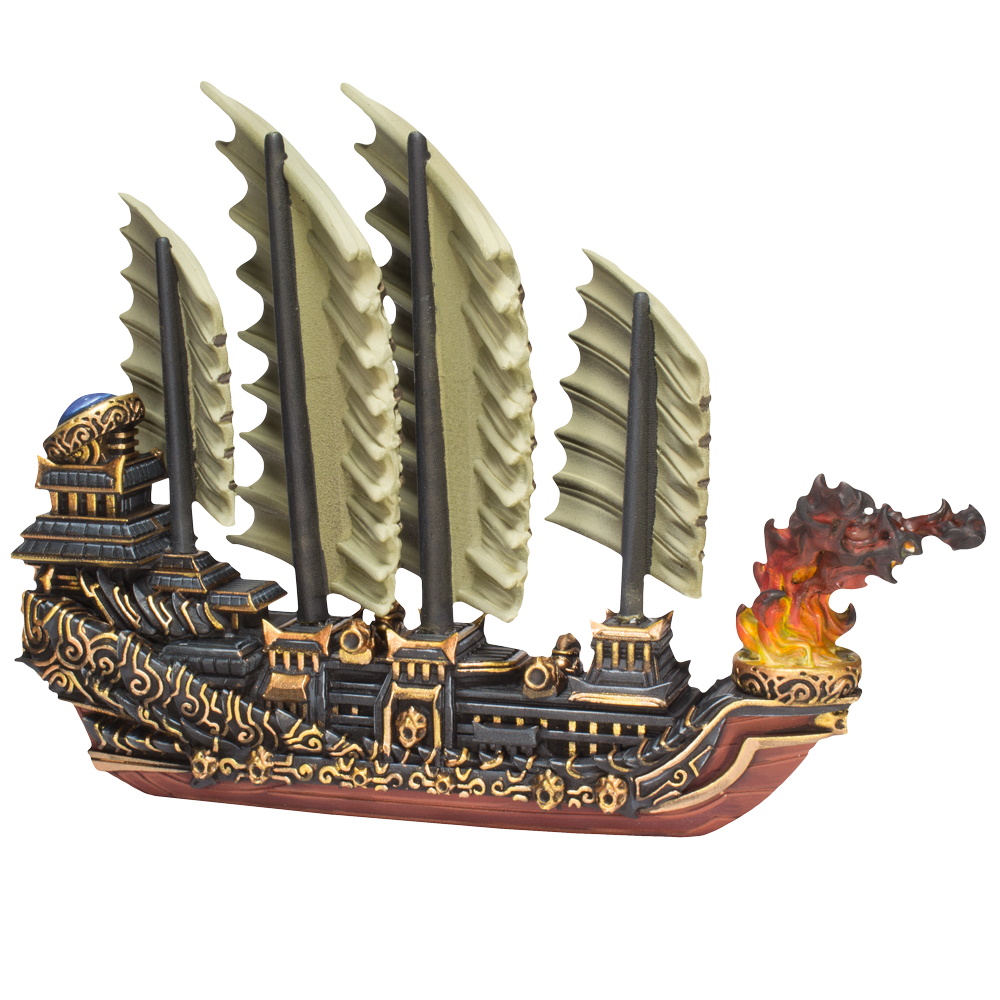 I have just ordered myself one of these fantastic ships, soon to join my newly painted Salamanders fleet.

This ship is just insanely potent. It has a great stats to points cost ratio and provides a nice rule whereby if it or a friendly ship within 3″ becomes crippled, it has a chance of negating this allowing the ship to restore back up to one above its nerve value.

Kthorlaq’s Shield just has it all. 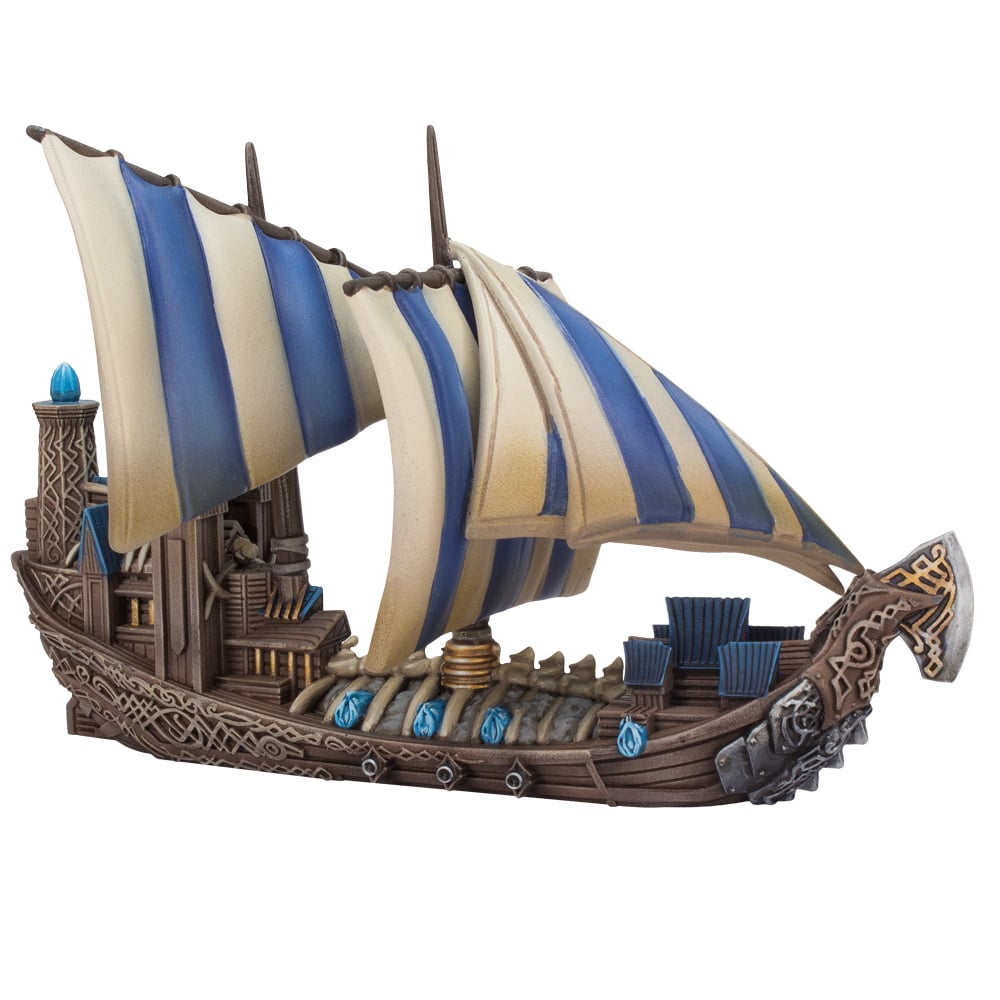 This ship alone made me buy into the Northern Alliance. The way the prow is sculpted like a giant axe head makes my skin crawl with excitement.

Plus it carries a deadly broadside mounted with Indirect Weapons. Easy to say I am a sucker for a broadside mounted Indirect weapon! Every game I cannot wait to move close to enemy ships and rake them with broadsides, all the while my Skadi conjures some Icebergs around the enemy ship to further increase the potential damage output. 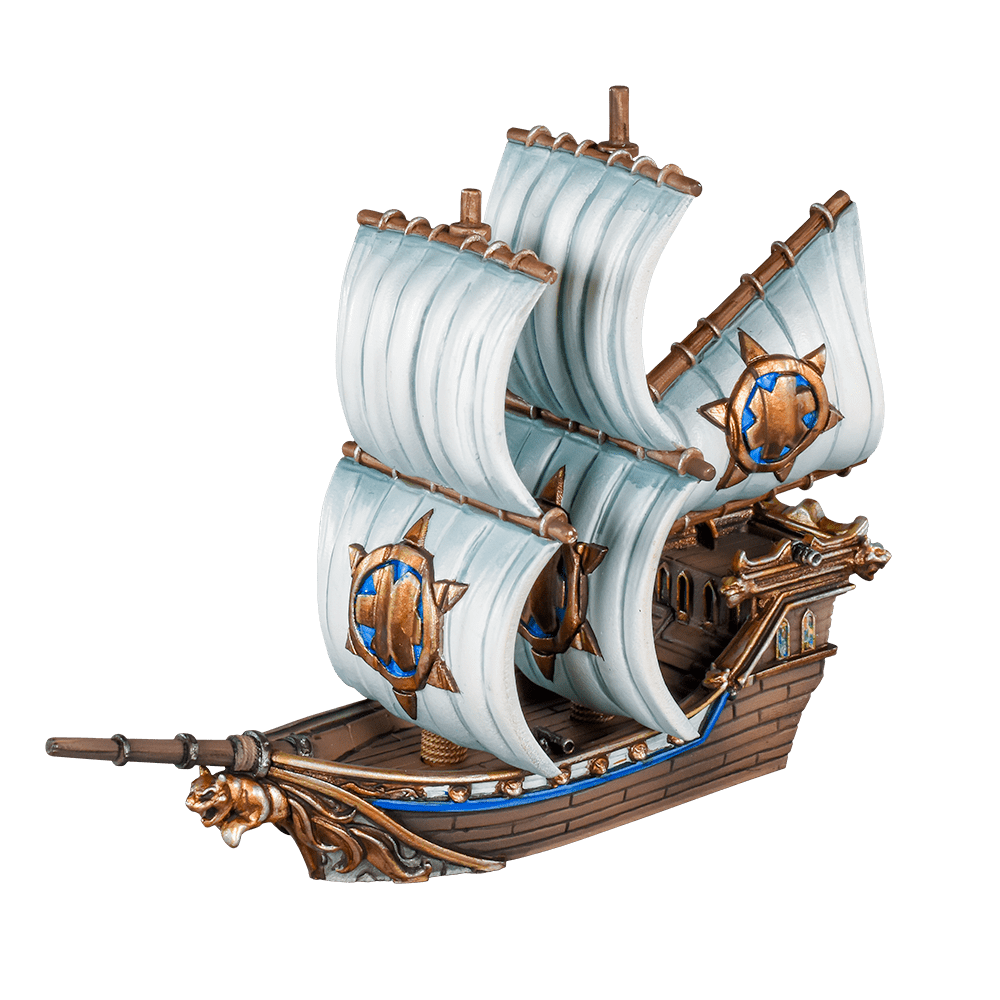 A very underestimated ship with a straightforward role and a cost to reflect it.

This Basilean Support Ship does not have to be all singing all dancing or even an expert at outmanoeuvring enemy vessels. Its only job (when I play them) is to be first in line, soak up some incoming damage, then Repair.

Thanks to a very low points cost anything else is just a bonus! My favorite build includes Inexperienced Crew, Sturdy Construction and Blessed Hull.

Support ships can play a vital role not only in causing additional damage to the enemy but to draw fire away from your main battle ships. 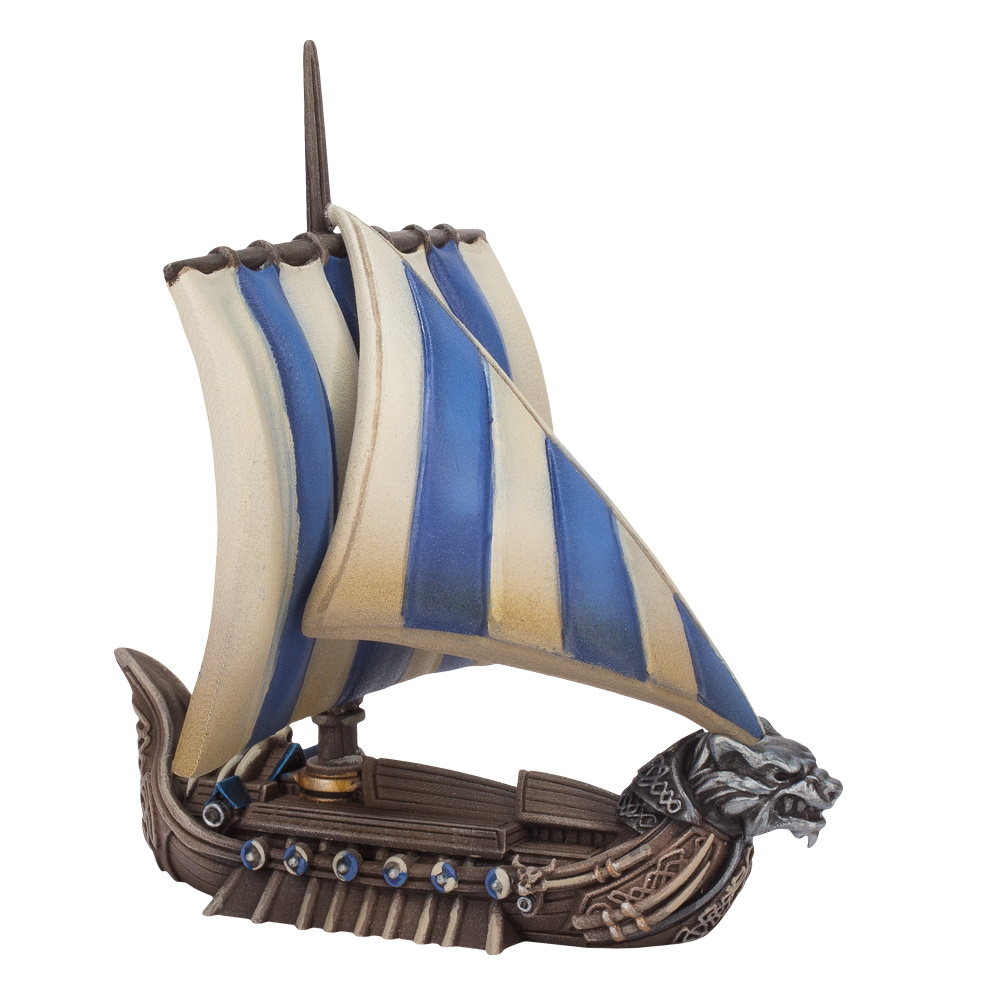 This medium sized ship is of the same class as the aforementioned Gur Panther.

It has a similar role, but on top of being a typical bullet sponge it has few more tricks under its sleeves (or rather sails).

With Oars and Navigator the Skeid is capable of easily outmanoeuvring enemy pursuers, zigzagging between terrain, (including rocks!) and then redirecting itself towards the objectives while undertaking Repairs.

A very solid choice worthy of a Veteran Crew.

Check back in next week for another exciting instalment of Mantic Monday!

Head to the high seas of Pannithor in this great value taster set for Armada, the game of epic naval warfare. This set includes everything you need to begin your journey, including a Basilean Gur Panther, orc Bloodrunner, special mat with rules references, rulebook, tokens and dice. It’s the perfect way to dip your toe into the water of Armada!