It’s Friday afternoon and it’s gotten dark outside, which can mean only one thing – the naughty Elves are out to play! The Twilight Kin are the sixth race for Kings of War and launch with six new kits including a Mega Army right off the bat: 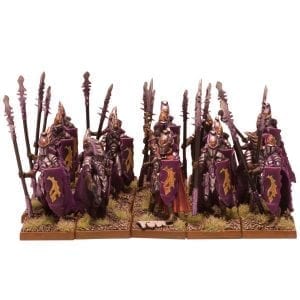 The Twilight Kin Spearmen contain metal heads, spears and cloaks to transform the plastic Elf sprue into their Dark cousins. Suitably evil and plenty of scales and spikes! 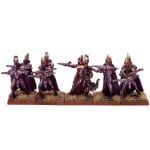 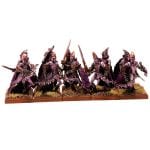 Based on the Scout frame, we’ve created both one handed and two-handed crossbows to make both Shadows and Crossbowmen for lots of poisonous death from afar, plus plenty of scaly cloaks and pointy helmets!

Just like the Abyssal Dwarfs these kits are not only great for army building but for people who enjoy modelling, converting or adding special units into their army. They are fantastic fun to build (I used my metal bits on the Revenant Cavalry bodies – should I get them on the blog?) and great to paint – we think the job by Golem is just stunning, one of our best painted armies!

NB: Naturally the Assassin is doing what Assassin’s do best – hiding. We’re hoping to have her to show off soon, but for now be rest assured that she is around, watching you… with knives. Oh, and she’s free in the first print run of the Twilight Kin Mega Army!