Using Dale and Scott Moon in The Walking Dead: All out War 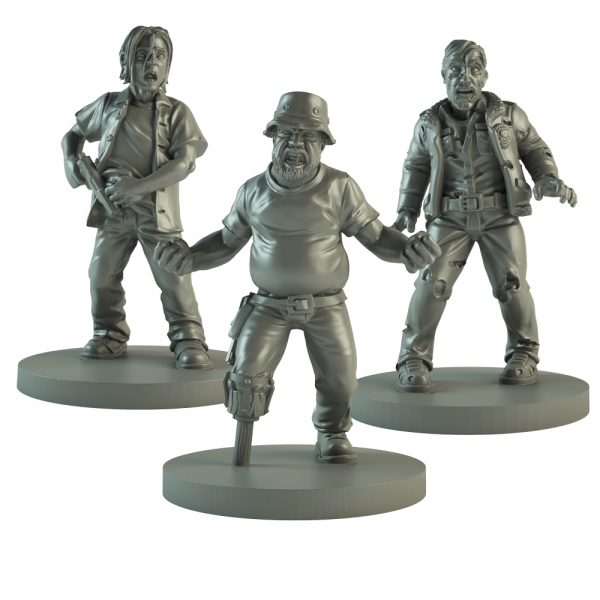 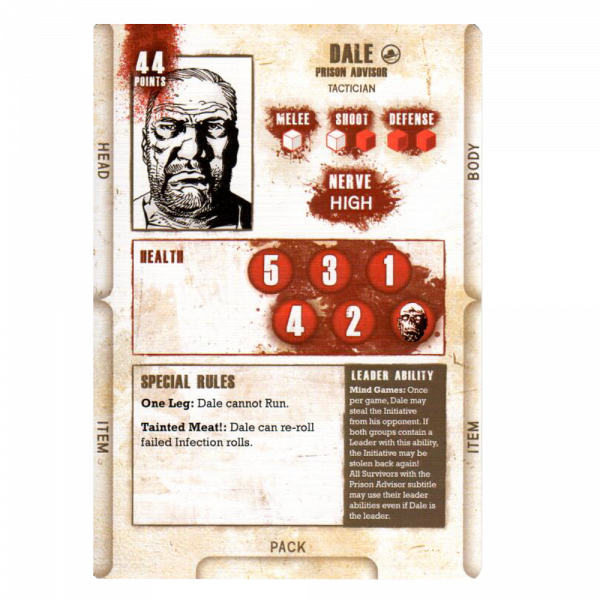 Dale is the last of the four Prison Advisors, alongside Rick, Tyreese, and Hershel. These characters have a special ability that allows you to use any of their Leader Abilities, even if another Prison Advisor is the Leader.

Dale’s current incarnation has taken a few hits. Losing his leg to a walker bite (and subsequent amputation) means that he is unable to Run, but it does grant him the Tainted Meat special rule, which allows him to re-roll failed Infection tests at the end of each turn. His special ability allows you to steal the Initiative from your opponent once per game – very powerful if used at the right moment. Dale’s main role here is support, keep him from harm towards the back and use his ability to steer the game your way, while also taking advantage of his decent shooting skill and high nerve. 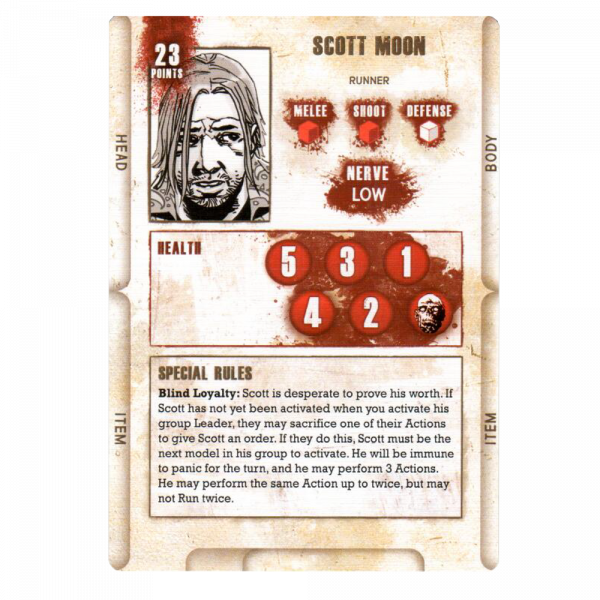 On his own, Scott isn’t spectacular. Generally low stats (although he has decent Defense) and a low Nerve too means that he isn’t a heavy hitter on any account. Where Scott shines is through cunning use of his special rule – Blind Loyalty. A Leader may sacrifice one of their own actions to allow Scott to perform three – he can even perform the same action twice (except Running). Keep him up the front and use him to grab items quickly. Although he can’t Run twice he can Sneak and Run, or Sneak twice in a row.

The equipment cards in this booster include a Prosthetic Leg for Dale, which allows him to Run 6” and can be discarded to avoid damage. The Meds card allows you to re-roll a failed Infection roll. There are also two firearms – the Colt 1911 and the Beretta 92. Both are Handguns that add a white dice to your shooting attacks, but the Colt has a 12” range (2” more than standard) and the Beretta has the Reliable keyword, which allows you to re-roll failed ammo rolls.

The Dale, Prison Advisor Booster is available at any show Mantic attends and online during Mantic Open Days – like the one this weekend!  You can pick the booster up from the website until 9 AM (BST) Tuesday 8th May.