Vanguard trembles under the march of the Dwarfs

Short in stature but as unyielding as the mountains themselves, the Dwarfs are a proud and noble people who attach a great deal of importance to heritage and custom. It is a naïve opponent indeed who does not acknowledge the Dwarf talents for war – when the Dwarfs go to war, they do so to win.

From the land of King Golloch – the Dwarfs are entering the Vanguard fray. These diminutive warriors may be lacking in size, but they certainly make up for it with hardy combat experience. From the rookie Dwarf Levy to the mighty Steel Juggernaut, the Dwarfs have enough options to ensure their enemies tremble with fear. We’ll run through the awesome new miniatures in a moment, so you can start drooling over our best Dwarf models ever!

One of things you may notice is that we’ve changed the way we do a full faction release. Instead of a faction starter and faction booster, we’ve listened to customer feedback and given players more options. For newbies there’s the Dwarf Warband Set, which is the perfect place to start building your warband, because it contains some hard plastic grunts and superb resin Sergeant, Ironguard and Ranger, along with a range of warband cards.

After you’ve picked up the Warband Set, you’ve then got the option of a range of support packs, which contain individual resin miniatures. This is to ensure players can pick and choose the miniatures they want to add to their warband, rather than buying a booster set with three miniatures in. This is a format we’ll be following throughout 2019 with the goblins, REDACTED, REDACTED and REDACTED. Anyway, enough of all that, let’s take a look at those sweeeeeeet Dwarfs. 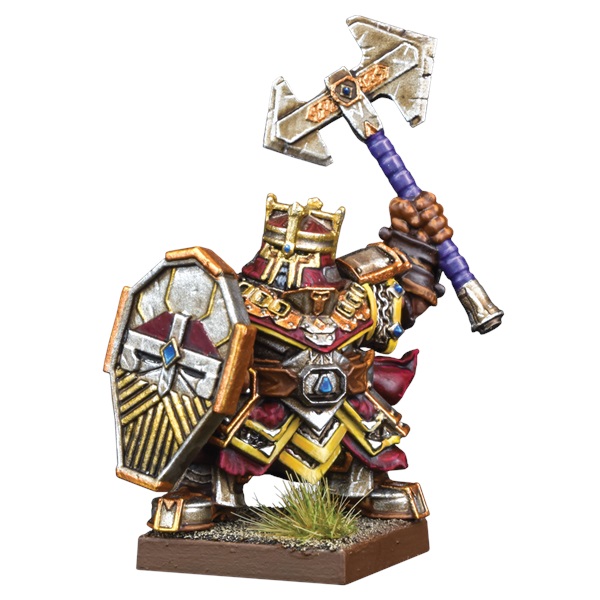 If you’re only just starting on your Dwarf journey, then the Dwarf Warband Set is the perfect place to begin. It comes with 10 miniatures and 21 Warband stat cards, covering the basics and a few extras for the Dwarf faction. As you would expect, the Dwarfs are a hardy bunch with some great ranged options and plenty of armour to ensure they can tough it out against even the strongest opponent. 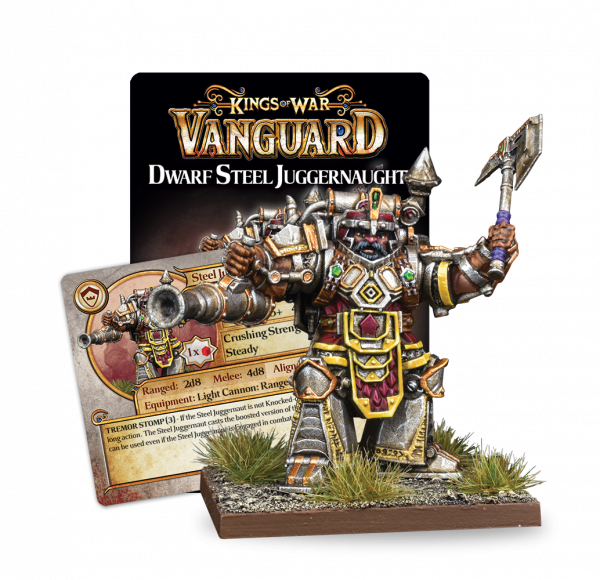 Knorri Ironheart’s personal battle armour, his Juggernaut, has divided opinion amongst the clan lords. Some have placed orders for their own personalised versions, or have their own engineers scrambling to copy the design. Others see it as an affront to warfare and the armour of a coward.

The Steel Juggernaut is the big hitter of the Dwarf warband, with Crushing Strength (3) and 4+ in melee combat, rolling 4D8. However, he’s pretty handy when it comes to shooting too, which makes him a great all-rounder and potential backbone for the Dwarf faction. Mess with the Juggernaut at your peril! 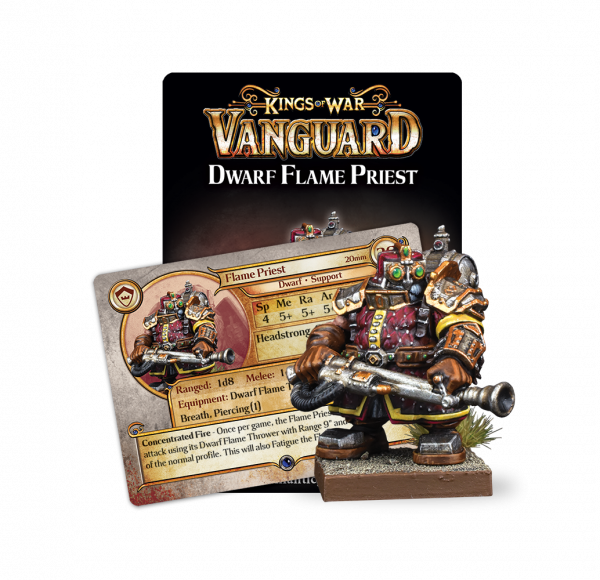 Dedicated to the Fulgria, the Goddess of White Fire, the mysterious Flame Priests are able to harness and channel fire into weaponry. They use their knowledge to destroy, as the dwarf Warsmiths use the same powers to create masterworks of metal and engineering.

The beauty of the Flame Priest is that his flame thrower is a Breath weapon. This means that instead of hitting just one enemy with an attack, he’ll strike all enemies under a 1″ x 6″ template. Perfect for clearing out foes that are gathered around objectives.

Just like the Steel Juggernaut, the Flame Priest also has an entry in Kings of War too. Order your Flame Priest here. 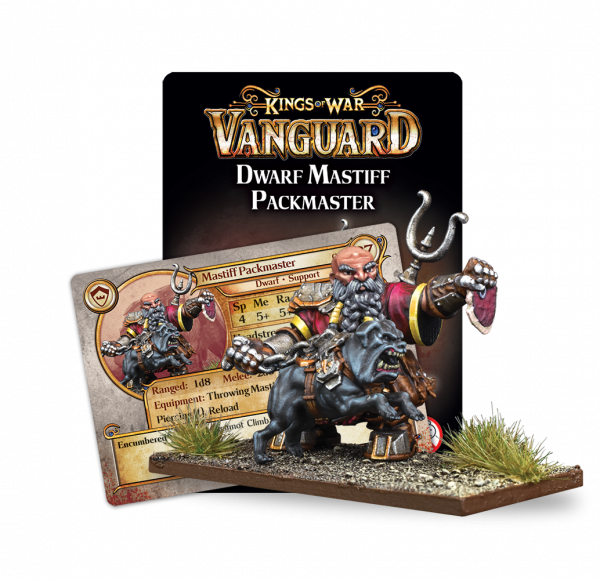 Younger dwarfs often mock packmasters for work they consider to be beneath a warrior. Such mockery lasts only until the packmaster sets his charges loose – a pack of purebred war dogs with sharp teeth and a taste for ankles.

As well as being an awesome miniature, the Packmaster is a great support option for a warband. The Swarm ability means he grants two extra dice when ganging up against an enemy in melee combat, which can certainly come in handy when teamed up with the likes of the Ironguard or Sergeant.

Although the Mastiff Packmaster doesn’t have his own entry in Clash of Kings, he would make a great addition to the Mastiff Hunting Pack… just saying. Order your Packmaster here. 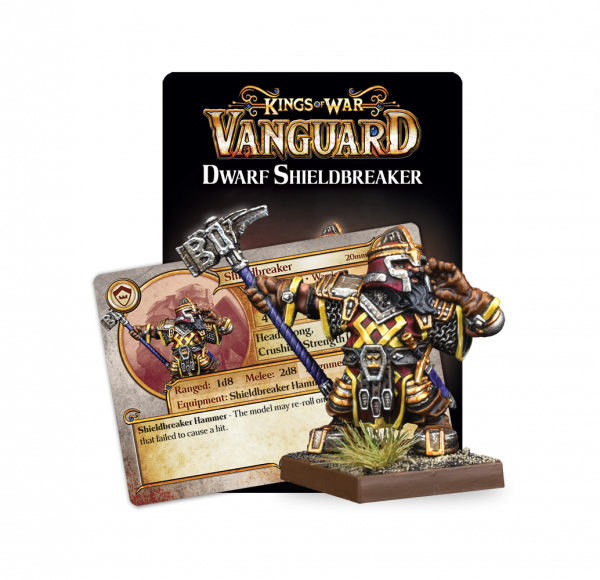 Shieldbreakers are aggressive fighters, with little to no thought of self-defence. Often encountered on the front lines of an army, these belligerent warriors can also be found joining an advance party; to clash with the enemy all the faster.

Already a well-known unit in Kings of War, the Shieldbreaker is a powerful Warrior for the Vanguard faction. Armed with a Shieldbreaker Hammer, he can re-roll a die that fails to hit in combat – ensuring that when he does hit, he hits hard. Order your Shieldbreaker here. 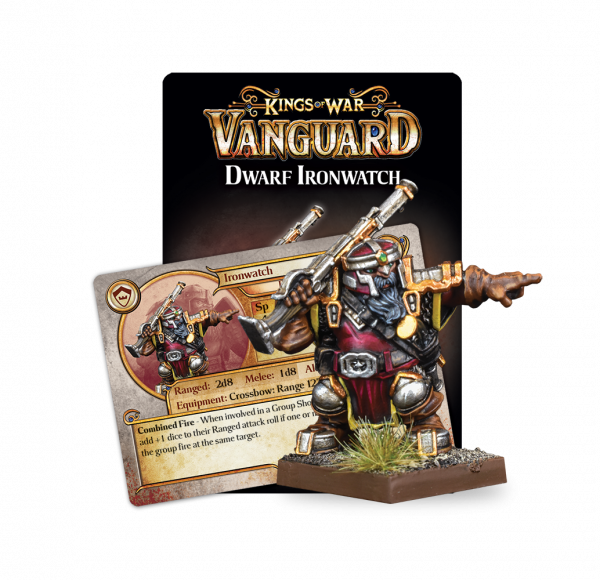 Veteran marksmen, the Ironwatch spend years mastering their weapons. Having fought in wars for many decades, their experience and skill are invaluable tools to any warband, although the black powder rifles they sometimes bear are appreciated, too.

Although you get two hard plastic Ironwatch miniatures in the Warband Set, this is a characterful addition to your ranks – perfect to use as the leader of a group of Ironwatch. Plus, you’re probably going to want a few Ironwatch in your squad, thanks to the Combined Fire ability. Order your Ironwatch here. 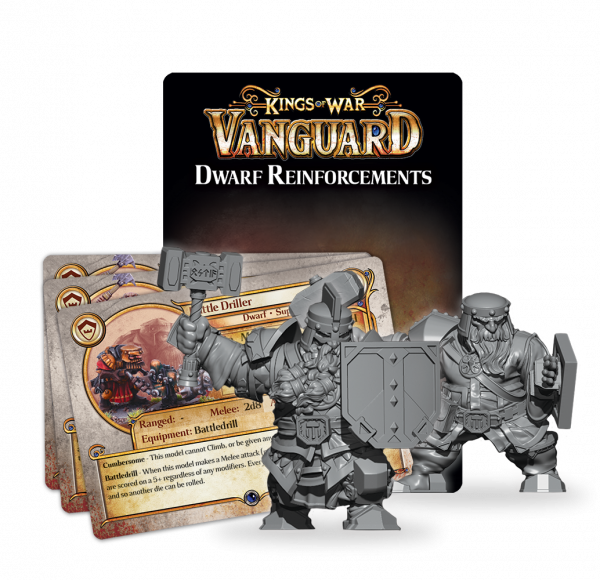 Induction into a dwarf hold’s military is a long and difficult process, for their masters are nothing if not strict and stubborn. Civilian aspirants must each serve years as a Levy – under the stern watch of Ironclad warriors – fighting in small skirmishes until they are deemed ready for true war.

The Dwarf Reinforcement Pack comes with one metal Levy miniature, plus two metal Ironclad miniatures (although you could use those as Levy too). The Dwarf Levy is the cheapest unit option for the Dwarfs and are useful for unlocking more powerful units like the Steel Juggernaut and Flame Priest. Order your Reinforcement Pack here.

So there you have the full Dwarf faction release! Remember, as mentioned in yesterday’s blog, EasyArmy will also be updated with all these units just after release – just in case you want to check what your opponent’s bringing to the table.

Tomorrow we’ll be introducing two new mercenaries for Vanguard: Firebrand, plus Kuzlo & Madfall, along with a chilly new option for the Northern Alliance.