Today, we’re going to take a closer look at some of the show exclusive characters for The Walking Dead: All Out War, that you can pick up either at a Mantic show stand or online during one of our Open Days (the next one is the 25th November!). They’re also included in the Collector’s Edition of the game. First up – the classics – Lee and Clementine. 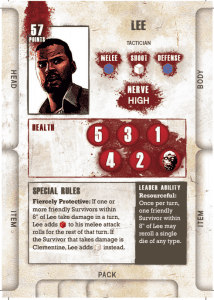 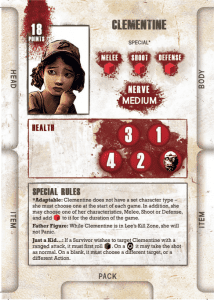 These two are designed to work together, but can also be used as part of a larger group of Survivors. If you are playing using them, make sure to keep them close to each other to make full use of their short-ranged abilities. Aside from his Health, Lee is a heavy hitter, with a Blue dice for melee and defence and a white dice for shooting – almost as good as Rick Grimes! Lee can grant Clementine (or anyone else) re-rolls and gains a bonus to his attacks if friendly survivors are injured during that turn, which is increased if the survivor was Clementine.

Clementine is a more subtle character. At the start of the game, you can decide how you are going to use her for the particular scenario by choosing her role. You can also augment one of her stats by adding an extra Red dice, so put some careful thought into what you want her to do in the game. In addition to all of this, those targeting her with ranged attacks have a chance of balking at harming a young girl and may fail to to attack her. This increases her defence in a roundabout way, so she can stay relatively safe, even with her low defence. Finally, she doesn’t panic if she is within Lee’s Killzone, so again – keep these two together.

Next up, the newcomers; Dale and Scott Moon. 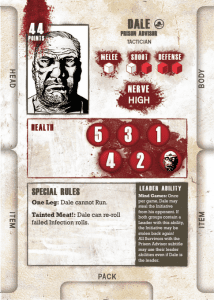 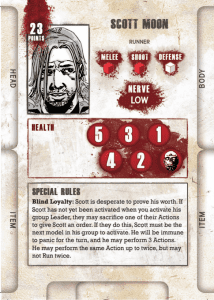 Dale’s had a tough time since we first met him. Mainly, after suffering a bite from a Walker, Rick was forced to amputate his leg in order to stop the infection from spreading. This experience has informed a lot of the abilities on Dale’s card. He can no longer run, although his peg-leg is still stealthy enough to sneak, apparently. As a result of his close call, Dale gets to re-roll failed infection rolls if he is bitten, making him uniquely survivable. Finally, he has a very powerful Leader Ability. Once per game, Dale can steal the initiative from the opposing player. This can be used to turn a game in your favour at the right moment. As he’s one of the four Prison Advisors, Dale can use this ability even if he isn’t the group’s leader.

Scott Moon is much less of a leader. Based on his short-lived role in the comics, Scott’s ability is Blind Loyalty. Basically, his group’s leader can sacrifice one of their own actions in order to not only allow Scott to take three (including performing the same action twice), but also make him immune to panic. This makes Scott very useful in games indeed, especially under a strong leader. Take care with his low nerve, however – make sure to use leader abilities to keep him from panicking if you aren’t going to use his ability this turn.

Remember, you can pick these exclusives up either at Mantic show stands, or online during our Open Day, or by picking up the Walking Dead Collector’s Edition now!