The Walking Dead: All Out War Kickstarter Edition

The Walking Dead Kickstarter Edition is back! 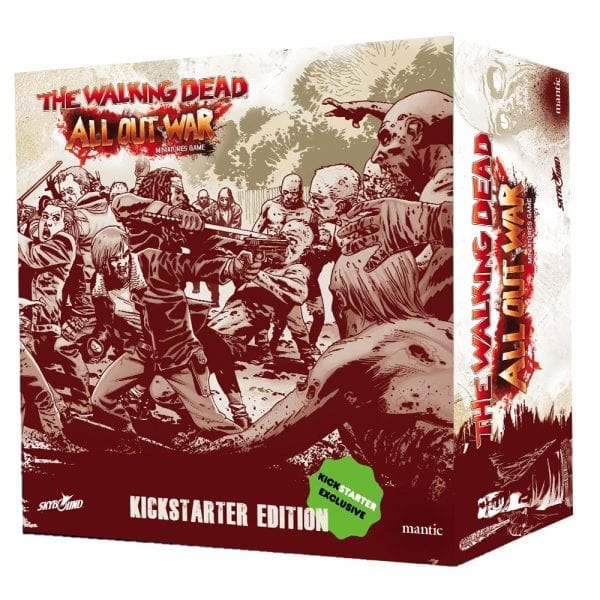 That’s right, we’ve pulled out the very last of the stock to put on sale alongside the brand new Collector’s Edition (more on that later). These will only be available in limited numbers so order yours now to avoid disappointment.

For those of you who don’t know, Kickstarter Edition of the Walking Dead includes basically all of the first wave (Days Gone Bye) including the core game. This consists of:

In addition to these, you also get all of the Character, Event, and Equipment Cards to use your miniatures, plus the card counters, scenery, dice, threat tracker, and Kill Zone that you’ll need to play. There’s also the Core Rulebook, Quick Start Guide and Days Gone Bye Expansion book – which includes extra rules and scenarios for your games. Finally, there’s also the Cards and Miniatures for the Kickstarter Exclusives – Abraham, Michonne, Negan, Walker Ronne, Rick’s Badge and the Bag o’ Guns Loot Marker. Wow – that’s a lot of stuff! All in all that’s worth over £150/€200/$230 – which you might notice is on sale for significantly less in this package.

As these have been in storage for a while, and were check and rebuilt for this sale, the outer boxes have suffered a little. We’ve made sure the contents are safe, so only the outer box will have suffered minor damage. As a result, we’ve discounted these slightly ore than their usual price.

To make things clear, we’ve separated these into two categories:

These are the last Kickstarter Editions we have, so you’ll likely never see them on sale on our webstore gain after this. So if you ever wanted to get into the Walking Dead: All Out War, the time is now!

You can Pre-Order The Walking Dead: All Out War Kickstarter Edition or Collector’s Edition from the Mantic Website.