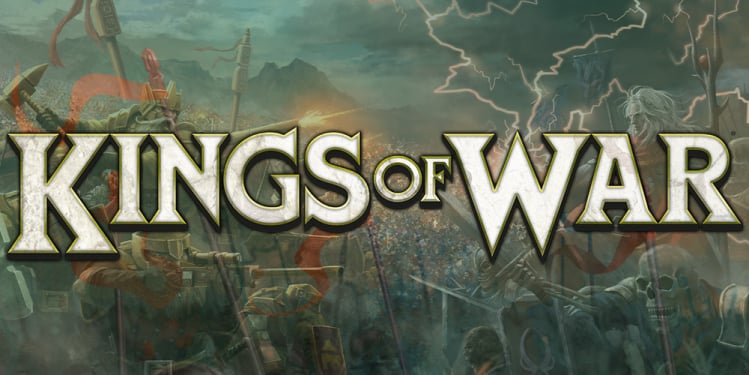 Basically, instead of doing our typical Clash of Kings release for 2022, we wanted to create the definitive edition of the Kings of War rulebook for existing and new players. Since Third Edition came out, we’ve had numerous releases that add to the core rulebook. Whether that’s unit changes, with Clash of Kings, new ways to play in Halpi’s Rift, or entirely new armies in Uncharted Empires; there’s a lot beyond the standard rules. Oh, and on top of that, you’ve got the FAQ and errata too.

So, when it came to planning this year’s Clash of Kings we thought that perhaps it was time to consolidate all of these disparate books into one magnificent tome… and thus the Kings of War Compendium was born.

Now instead of turning up to a tournament with your rulebook, potentially a copy of Uncharted Empires and the newest Clash of Kings, alongside an FAQ; you can rock up with one sleek volume. We’re all about making life easier for players!

Of course, it’s not just about consolidating the rules into one stunning book, and this definitive Edition also introduces some really exciting elements to Kings of War. We’ll be delving into these in more detail over the coming days and weeks, but inside you’ll find: As you can see, it’s absolutely crammed with awesome content. For a new player, this is a great way to make sure they’ve got the most up to date version of the rules. Meanwhile veterans can buy the book safe in the knowledge that they’re getting the usual Clash of Kings updates, plus a whole lot more.

IS THIS A NEW EDITION?

It’s important to note that this is NOT a fourth edition. Think of it more like a 3.5. It just takes all the updates since Kings of War: Third Edition launched in 2019 and crams them into one bumper rulebook.

Now, you may be looking at that list above and thinking about the current 400-page rulebook, then wondering what wheelbarrow you’re going to need to carry around this new grimoire. Well, we have had to make one sacrifice to the Wicked Ones. There will be no lore in the updated rulebook to help keep the page count fairly manageable.

However, it’s not all bad news. The lore will be soon be available to download as a free sourcebook from the website. In some ways, this may actually be better for new players (or experienced players, for that matter) who would normally only purchase the Gamer’s Edition, which doesn’t include the background. Now you’ll be able to download all that juicy background for free and immerse yourself in the world of Pannithor.

So, there you have our brief guide to the Definitive Edition. Over the coming days and weeks, we’ll be delving deeper into why it’s so exciting here on the Mantic news page.

Just sit back, relax and prepare for the greatest Big Red Book to ever inhabit the fantasy realm! A fantastic set of in-game spell and artefact reference cards for your games of Kings of War. Updated for the 2022 edition this 74-card deck includes the rules for every spell and magic artefact from the rulebook