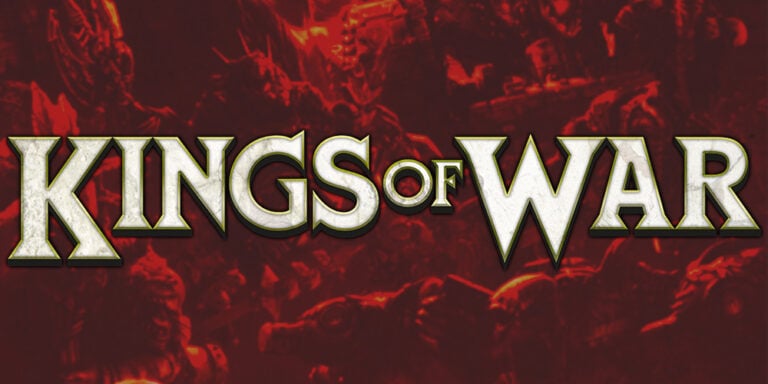 Hey folks, it’s time for part three and sadly the final part but fear not we will have more of these great short stories in the near future.

“We’ll charge down that hill and show them what for! They’ll leg it back into those woods and we’ll be back up here eating supper in no time” boomed Arthern, confidently. A few of the other halflings cheered and banged their weapons against shields or on the ground.

Rodrick wished he had Arthern’s confidence. His mind raced as he tried to remember his training. He jumped as Dellen touched him lightly on the arm.

“Don’t worry,” she said, kindly. “Just remember to keep the pointy end of your spear toward the enemy. The first kill is always the hardest. After that it all becomes… normal.”

Rodrick spotted the briefest flash of sadness across Dellen’s face. He had heard from one of the other runners that Dellen’s husband had been killed in the first skirmishes against their former allies, the League of Rhordia. As soon as she heard about his death, she closed down the bakery they had opened together and signed up to the militia. Rodrick had never really plucked up the courage to speak to her about it. Now he may never get the chance.

“Spearspikes, ready!” roared Arthern and was greeted by a cheer. “Wild Runners, ready!”

Rodrick’s cheer caught in his throat. He watched as the goblins at the bottom of the hill began forming up. A few were squabbling and pushing their fellow greenskins to the front of the battleline. He spotted one bite another’s nose in retaliation before being bashed over the head with a makeshift spear. If Rodrick wasn’t so terrified, he’d almost find it comical.

His thoughts were cut short, however, by a shout from Arthern for the Wild Runners to charge. He hesitated for a moment but soon found himself bounding forward once Dellen gave Jasper a gentle tap with her spear. A few of the other aralez were howling in excitement as they barreled down the hill towards their foe.

They were quickly closing the gap on the goblins and Rodrick noticed the goblins’ small, black arrows raining through the sky. The problem was, the Wild Runners were too fast and the arrows fell harmlessly behind them while the goblins struggled to aim correctly. Meanwhile the Spearspikes were following behind at a safe distance, waiting for the Wild Runners to make the first strike, so they could mop up whatever remained.

Rodrick and the other Wild Runners were almost on top of the goblins now and he gripped his spear in anticipation, while forcing himself to keep his eyes open. Suddenly from out of the woods behind the goblins burst two bizarre contraptions. In amongst the billowing black smoke erupting from the machines, Rodrick could make out a sort of chariot with an engine attached and a couple of goblins desperately pumping away at the controls. However, what really caught his eye were row upon row of savage-looking drills that spun wildly at the front of the mechanical horror. The goblins leapt aside as the devilish devices thundered past them, toward Rodrick and his fellow halflings.

The first contraption smashed into the left flank of the cavalry and was greeted by a high-pitched cheer from the goblins. The charge of the first troop of Runners faltered as they attempted to turn and avoid the carnage. Now the second war engine was hammering straight toward Rodrick’s troop. He pulled hard on Jasper’s reins to make him stop but was horrified when the leather snapped and sent him tumbling onto the ground. Rodrick hit the dirt hard, knocking the breath from his lungs.

“Jasper,” he wheezed, but the aralez couldn’t hear him. He struggled to his knees and tried to ignore the sharp pains shooting through every bit of his body. Despite the waves of dizziness, Rodrick realised with some alarm that the goblin archers had found their distance. Arrows thudded into the ground around him and he heard a halfling scream as one found its target.

Finally Rodrick caught sight of Jasper. The daft dog had carried on running, momentarily unaware that his rider had fallen from the saddle. He was now between Rodrick and the goblins.

“Jasper!” he managed to shout, which caused another wave of dizziness to almost overwhelm him. “Over here!”

Jasper’s ears pricked up and he scanned the battlefield until eventually locking eyes with Rodrick, who managed a weak wave. The aralez gave an excited bark and began bounding back towards Rodrick, tail wagging and tongue lolling from his jaws.

An arrow struck Jasper in the hind leg. He gave a yelp but kept on running. A second plunged into his side and this time Jasper collapsed to the ground. He didn’t move.

Rodrick’s world went black and he could only hear screaming. After a moment he realised it was him shouting Jasper’s name at the top of his lungs. He stumbled towards his fallen comrade, chest burning with the impact of the fall and from crying out for the aralez. An arrow landed at his feet and Rodrick stopped in his tracks. Wiping away tears, he glared towards the goblins. A few were now advancing cautiously up the hill and to his left he could hear the infernal drilling of that dreadful machine.

Rodrick wanted revenge. So much so that the sensation overwhelmed him and took away the pain of his fall and even dampened the pain of losing Jasper. Then with a determined nod he realised what he had to do. He turned and ran back up the hill. He was dimly aware of someone, perhaps Dellen, shouting his name, but he kept running. Passing the Spearspikes, who were preparing to meet the charge of the goblins, he ignored the cries of ‘coward’ and ‘yellow belly’.

Cresting the hill, Rodrick’s breaths came in heavy gasps and black dots danced across his vision. He shook his head and headed toward the gap in the side of the barn. Once inside he headed straight for the grenadier outfits and quickly pulled one from a peg. While struggling to put the suit on properly, he momentarily considered whether his idea was complete madness. He’d only ever read about the grenadiers in one of his pamphlets, let alone actually having used one to fly. But then Jasper’s final moments played across his vision and he knew this was the right thing to do. With a final shrug of his shoulders, the wings were on his back. He was ready to go.

Using the heavy boots of the suit, he kicked through the hole in the side of the barn to make it larger and just about managed to squeeze himself through. He hoped he hadn’t torn the wings or damaged the machinery. Still, there was no going back now. His mind was made up. With a final, determined look at the goblins down below he grabbed a firebomb.

“This is for you Jasper,” he growled and started the engine.

If this great story has got you yearning to take revenge on the Goblins then why not pick up a Halfling Ambush Set and an Aralez or two. Maybe you side with the Goblins and their Ambush set is more your thing, alongside some extra Mincers! 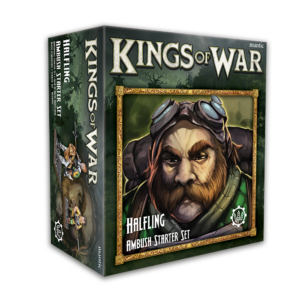 Since gaining their independence, the Halfling shires have established a well-trained and well-armed military. These doughty warriors take advantage of every advance their homelands have to offer, from black-powder weaponry, to juvenile aralez cavalry. 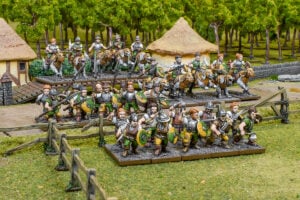 The Trained Bands are the most common troops in the Shire Army. Many so-called Braves that are drafted to the Bands are not full-time soldiers, although they are better trained than some militias found elsewhere. They typically have padded leather armour and wooden shields or bucklers, and carry a variety of weapons. Some Trained Bands are organised and equipped as light cavalry riding highly trained miniature aralez. Their primary mission is scouting and skirmishing, but on the battlefield they will harass the enemy with ranged fire and protect the army’s flanks, charging into melee if absolutely necessary. 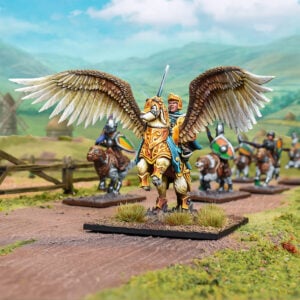 Like all armies, the halflings have some commanders, champions and individuals that play unique and crucial roles in keeping the army organised, outwitting the enemy, or just throwing in a lethal surprise. Sergeants, Constables, Muster Captains and Generals form the main command structures when the halflings march to war. While the goal of halfling leaders is to defend and protect, avoiding conflict where possible, it is the duty of these same leaders to bring the full force of halfling savagery to the enemy if pushed too far. Once the army engages, keeping the halfling battle lines under control in the face of their anger and desire for relentless revenge can be a daunting and sometimes hopeless task. 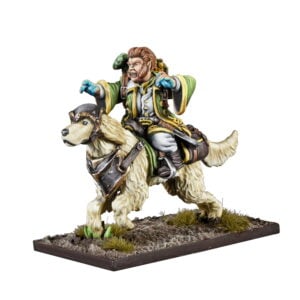 In recent years, putting their knowledge of animal rearing to good use, the Shire military have started breeding a miniature version of the aralez. A fabulous dog-like creature from the plains the aralez is large enough to be ridden comfortably as cavalry for the army. 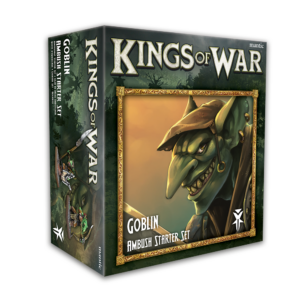 What the goblins lack in strength and bravery, the more than make up for with numbers, ramshackle machinery, and maniacal glee in outnumbering and dragging down their foes. They’d never win in a fair fight, so they never fight fair – making use of every underhanded tactic and advantage they can get their grubby hands on. 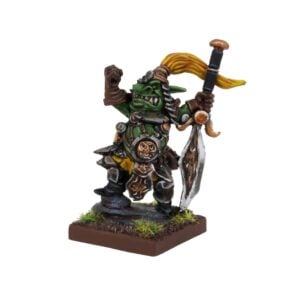 A goblin king (or queen, for that matter) is a particularly cunning individual that decides to crown themselves as a vicious monarch. However, the life of a goblin ruler is fraught with danger as other wannabe despots crave the role for themselves meaning their rule can be extremely short-lived.

Riding into battle astride an angry mawbeast is perhaps the best proof that a goblin monarch isn't always of sane mind. As if that wasn't bad enough, they also tend to arm themselves with the biggest weapon they can find to make up for their diminutive stature. 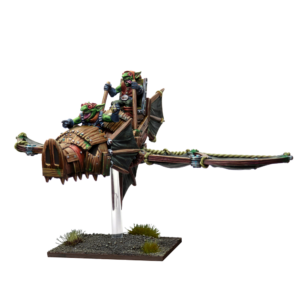 A seemingly random jumble of wood, metal and bloody-minded goblin determination, the Winggit is a contraption that really shouldn’t be able to take off the ground. But when it does, it provides an eye in the sky and rains bombs upon its foes.