12 Days of Christmas: DreadBall returns to the pitch

2018 promises to be THE year of DreadBall! After originally launching back in 2012, DreadBall went on to be our first global success. Players around the world grabbed their DreadBall gloves and headed to the pitch for some fast, furious and fun games of the galaxy’s best sport!

After initially releasing three seasons on the back of the original Kickstarter, this was quickly followed by DreadBall Xtreme, which brought with it more teams, more MVPs and more special abilities. Unfortunately, although these new teams were great fun to play, they were typically more powerful and less balanced than the originals.

However, we still loved DreadBall here at Mantic so we decided we wanted to re-balance the teams and breathe new life into the galaxy’s best sport. The result was the DreadBall Second Edition Kickstarter, which launched in 2016. The aim of the Kickstarter was simple: re-balance the existing teams and launch four new ones too.

BACK TO THE DRAWING BOARD

After successfully completing the DreadBall Second Edition Kickstarter and doing the hard work of re-balancing those teams, it quickly became clear that the changes didn’t feel quite enough to justify calling it Second Edition. 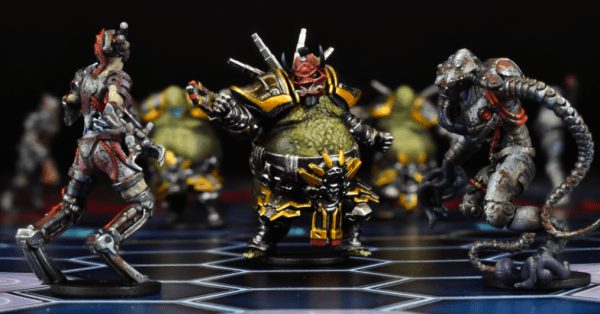 In light of this, the difficult decision was made to return to the fundamentals of DreadBall to see what worked and what didn’t. We also analyzed each team in further detail to not only look at their stat lines but their various abilities too. Our studio manager Stewart put in lots of time combing through each aspect of the game to make sure the finished product was lots of fun but also competitive enough for tournament play.

The final result is a much-improved version of DreadBall! Some of the highlights include:

All of these combine to make DreadBall Second Edition feel like a fresh experience for hardened veterans, while new players should find the streamlined rules much easier to pick up and play.

DreadBall Second Edition is already on its way to Kickstarter backers (in fact, some may have already received it by the time you read this). For those who didn’t back the Kickstarter, a new two-player starter set – which includes the new Yndij and Robot teams – will be available in April. Alongside this, you’ll also be able to pick up the other new teams (Matsudan and Cyborgs) at the same time.

What’s more, we’re keen to promote the tournament scene for DreadBall and we really want to see people playing in their local stores and at clubs. In fact, we’re already hard at work on a rankings website and are planning to have it ready for testing in January. Stay tuned for more details!

We’re really excited to be heading back to the pitch for DreadBall Second Edition and we’ve already for our first Mantic HQ League lined-up for the end of January. Closer to the retail launch we’ll be working with Beasts of War to produce a new DreadBall Academy to get you up to speed with all the changes and the new teams. Also, we’ll be holding a tournament here at HQ in May/June – so keep your eye on the newsletter for when tickets go live.

In the meantime, if you simple can’t wait to get your DreadBall fix, you can currently pick up DreadBall Xtreme for less than half price! Even if you don’t play the game, you’ll get two DreadBall teams at a reduced price.