12 Days of Christmas: Kings of War

Kings of War continues to grow and 2017 featured plenty of great highlights. We had the summer campaign – ‘Edge of the Abyss’ – in which players from all around the globe fought to protect or conquer the whole of Mantica. More than 1,000 games were registered over the course of the six weeks, which is an amazing achievement.

The Edge of the Abyss supplement also introduced some exciting new characters into Kings of War canon. In fact several of these were incorporated into their own Dungeon Saga adventure – Eye of the Abyss – and that was a great opportunity to learn more about them. It also saw the launch of formations, which has definitely helped shake up the game and encourage players to dust off those troops that may have been sitting on the shelf for a while.

Alongside this, 2017 saw plenty of new miniatures introduced into the Kings of War line. In February we launched the Trident Realms army, featuring the Naiads, Water Elementals, Thuul, Riverguard, Gigas and Wyrmriders. What’s more the opening of our in-house resin department gave us the opportunity to launch some biiiiiig monsters and towards the end of the year we released the Steel Behemoth, Greater Fire Elemental, Revenant King on Undead Wyrm and Vampire Lord on Undead Dragon. All of these new releases were direct to retail too. But what’s coming up in 2018?! 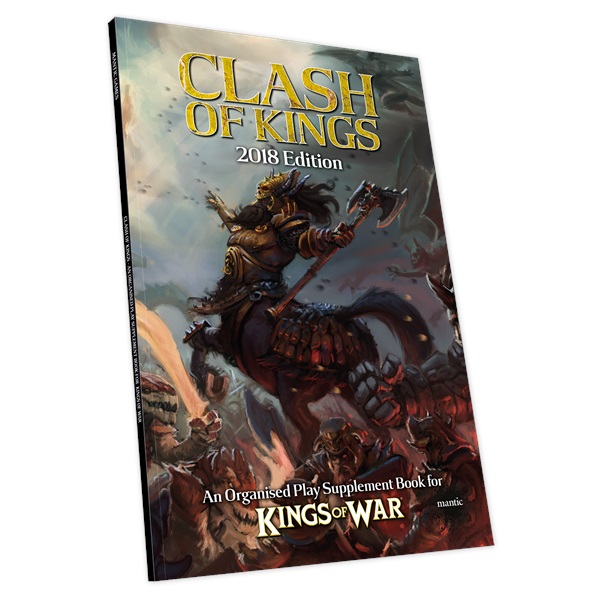 The first big release on the horizon is the brand new Clash of Kings 2018 supplement. We originally released Clash of Kings last year to update the rules and give players tips on organizing their own tournaments. However, with Clash of Kings 2018 we’re going even bigger (literally because it’s now 72 pages)! It features:

Clash of Kings will now be an annual release to ensure the game continues to stay fresh and fun! Pre-order Clash of Kings 2018 now. 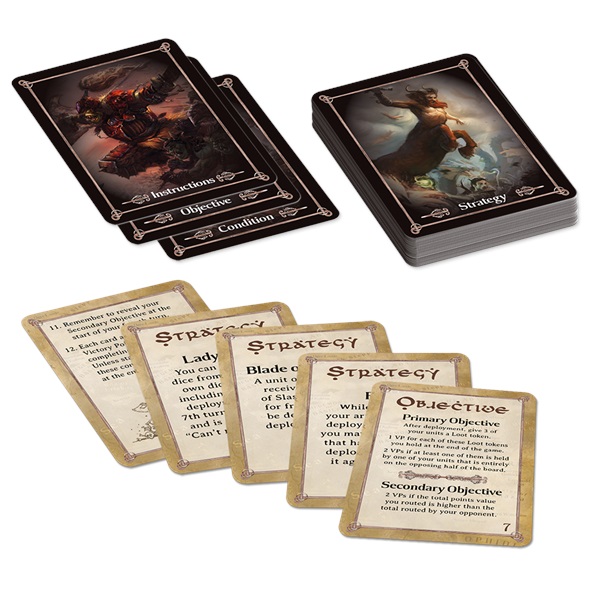 Also in January we’re releasing the Battlefield Cards. These have been designed to replace the standard scenarios in the book and represent the chaotic and ever-changing nature of war!

To use them each player shuffles their own Objective, Condition and Strategy cards, then places them face down. A Conditions card is drawn to see if there are any special battlefield conditions in play for the game. Each player then draws two Objective cards from their own set – one is the primary objective and the other is the secondary. The former is revealed immediately, while the second is revealed at the start of their fourth turn. Finally each player draws one Strategy card for each complete 500 points in their army list.

STRATEGY – here you might get the chance to re-roll a dice, subtract one from a nerve test or even get a magical artefact for free

OBJECTIVES – there are numerous objectives, such as 3 VPs if you have more unit strength entirely on the opposing half of the board or 2 VPs if you rout the most expensive remaining unit

As mentioned earlier, having our own in-house resin department means that we’re now able to produce those big centrepiece units that you can build your army around. For example, if you followed Rob’s blogs about painting his Steel Behemoth, you’ll know that he wanted that to become the focus of his Dwarf Army.

So, we’ve gone through the army lists and chosen an exciting selection of large units that will be heading to retail in June. Currently the list contains (subject to change):

Finally, we recently ran a Kickstarter to launch Kings of War Vanguard, the warband-level skirmish game set in the Mantica universe. As well as creating rules for a fantastic skirmish game, the Vanguard Kickstarter also helped us make a host of new units (like the hard plastic Nightstalkers) that will make the crossover into Kings of War too.

What’s more, it will help introduce more players into the world of Mantica and encourage them to scale up their Vanguard warband into a full blown Kings of War army. Oh, and if you missed out on the Vanguard Kickstarter, don’t worry because we’ll have late pledges available in January.

All that remains to say is that now is a great time to start a new army, particularly if you want to take part in this year’s Clash of Kings (stay tuned for details on that). If you are starting a new army we’ve got a special bundle to grab the Kings of War rulebooks and save money on an army deal. What’s more, we’ve brought back the Monster Bundles from earlier in the year and added a couple of new ones too. Check them out here! Thank you once again for supporting Kings of War and helping to make it the best mass fantasy battle game in the world.