Have you been keeping up with our exciting Christmas blogs? Well, it’s only day two, so it’s not like there’s been a huge amount to miss so far. Anyway, to make sure you don’t miss exciting details about your favourite game, here’s a rundown of what’s coming up…

So, today we’re on to Armada. After launching – or should that be setting sail – in 2020 (right in the thick of the pandemic), Armada has continued to go from strength to strength. There are now seven fleets available (orcs, Basileans, dwarfs, Empire of Dust, Kingdoms of Men, Twilight Kin and elves), along with fliers, the amazing magic deck and the Seas Aflame supplement.

However, we’ve got plenty more exciting new releases coming up in 2022, so if you’ve been waiting to jump in – now’s your chance. Let’s take a sneak peek…

After the… ahem… interesting response to the dwarf gun worm, we went back to the drawing board to create two brand-new fliers for the dwarfs.

The dwarfs will now get a giant, armoured raven and a zeppelin. The latter was one of the most requested alternatives to the gun worm. We hope you like these new dwarf fliers… because we’re certainly not changing them again :p

The dwarf fliers are due to take off in February.

The next full fleet release for Armada will be the Salamanders. Since we first teased some artwork of these ships, there’s been a lot of anticipation for their launch. After all, apart from the elves, the Salamanders are some of the most experienced sea-faring folk in the whole of Pannithor.

The Salamanders possess a small but elite navy, with large, powerful ships. Their crews, often commanded by mysterious arkosaurs, are well-drilled – indeed, through some form of racial memory, many salamanders are spawned with knowledge of sailing and naval strategy in their fiery blood. The strange appearance of their battle ships has remained largely unchanged for millennia, and were themselves developed in response to their enemies in the East, foremost amongst them the ancient Xirkaali Empire.

If the imposing forms of their ships weren’t enough to deter most challengers at sea, the belching smoke from their batteries, and the dancing flames at their prows are sights to strike fear into the hearts of sailors everywhere. For the Salamanders are masters of firecraft, which they use to their advantage. The arkosaurs command fire elementals to do their bidding, while their own vessels are protected from flame by armour of drake-pelts and dragonscales.

Their gundecks are packed with heavy guns, and their crews often comprise a contingent of Corsairs, whose firelocks pick off enemy commanders and elite troops during boarding actions with impunity. Upon the Drake’s aftcastles, scorchwings perch, awaiting the call of their master to swoop down and attack the enemy in a fiery conflagration. At the prow of each Drake burns a Crucible of Flame, which smoulders ceaselessly, until an arkosaur commands the greater fire elemental within to come forth and smite their foes.

The Salamanders fleet will be available in February and pre-orders will start in January. 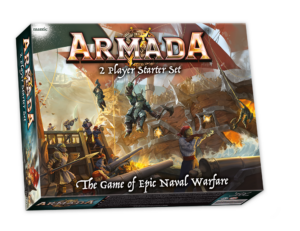