Home > News > Everything you need to know about The Mantic Companion

Everything you need to know about The Mantic Companion

We want it to be easier than ever to start, collecting and playing Kings of War, Deadzone or Firefight, and the best bit? Most of it’s free!

What is the Mantic Companion?

The Mantic Companion is an app for everything Mantic Wargaming. We have it jam-packed with tools to do everything from building rosters to attending tournaments for all your favourite Mantic games… and with Armada coming in early 2023 the site will just keep get better and better!

The Mantic Companion is made by – and designed for – wargamers, and provides all the tools necessary to quickly and easily get playing.

As many of you know (and lots of you already subscribe) we have been working for a while with Greg at Easy Army to provide Army lists support. However, as we keep adding more games, and more armies (and more functionality) we realised it was unfair and impossible to develop this out of house.

Hence the Mantic Companion was born…. and it will allow us to provide much better support to all the Mantic Games systems.

And to give everyone a chance to see just how cool the Companion is we are offering totally free access to THE WHOLE APP until 31st January 2023 – so that’s up to 3 months free!!! WOW – so sign up next week and get until the end of January totally Free of charge!

Oh,…and if you have any unused months on Easy Army we will be honouring those – and adding them to your Mantic subscription – because that is just the Mantic way 🙂

The official Mantic Army List Builders have been created, tested and improved to make list building a pleasure.  We are launching the app with a entry level free tier which will allow you to build TWO full lists per Mantic game.

The app has been designed for speed of use, legibility and  usefulness during any Mantic game, with advanced features like “View Mode” and “Quick Rules”. With just a phone, you’ll have all the stats needed to play a game.

You’ll also be able to see a repository of “Public” army lists that can be liked and shared, as well as free sample lists for all of our starter boxes!

When we said the Mantic Companion was built by wargamers, we weren’t kidding. The chief developer, Mantic’s own Elliott Barratt, loves nothing more than to dive into the statistics behind the game, and use that information to build his lists.

To that end, the Math Hammer tools were created; combat simulators giving you the ability to analyse different unit options and combinations in different fighting scenarios.

What’s more, subscribers to the Mantic Companion will gain access to pre-calculated Math Hammer stats inside the list builders for quick reference and comparisons between units!

With the tournament scene in full recovery after the pandemic, and growing rapidly for games like Kings of War, Firefight and Deadzone, we’re providing both Tournament Organisers (TO’s) and players the means to run and attend Organised Play events using our official tool.

For TO’s, the Mantic Companion makes it easier than ever to create, run and post tournaments. Who doesn’t like less paper work!?

For players, the Tournament Companion is just that – a tool that will automatically give you all the information you need; from which gaming table you are on, to your opponents list, beautifully laid out clearly for all devices to mean a day of easy, fun gaming – allowing you to concentrate on winning your battles!

For every supported game in the Mantic Companion, you’ll be able to access our Live Rulesets. Yes – you read that right – these are the complete rules, including any and all supplements, bolstered by some really great additional features.

The Live Rules tool includes an “Advanced Search” function, getting you to the exact page and paragraph you want to read in just a few seconds. Where useful, we’re also adding animated and video examples to making learning the game a doddle, or explaining tricky rules (although they obviously do not exist – because these are Mantic games after all!!!).

Speaking of learning our games, every user on the Mantic Companion gets access by default to the free version rules for every game. These curated limited rules gives new players exactly what they need to be able to see exactly how great our games are before investing in their first army box and a Mantic Companion subscription!

That’s right folks, Mantic are creating and housing our official world-wide rankings for all our games.

The Mantic Companion will be your one stop shop to browse events and tournaments, and catch up on the latest player placings. And as a global hub for player rankings, you’ll be able to filter and search by location, faction played and season.

We know that there are lots of rankings out there already – and this is not trying to replace or impede these – this is our way of knowing which armies are doing well – and giving prizes and kudos to players wherever they are – be they Clash of Kings champions or local gaming heroes! Wednesday is dedicated to a deep dive on how you can score points – and how the Mantic ranking points can run alongside all other points systems too!

We really want to support the fantastic Organised Play that the Mantic community already supports – while opening up a rankings system for all those that aren’t part of an organised, nationwide scene.

But wait…. There’s more! Not only will players be able to find events near them, the Mantic Companion will house a raft of other community support tools like Club and Store / Stockist locators – making finding a store, an event or a pick-up game easier than ever!

The Mantic Companion is launching on the 1st of November! Check back in throughout this week – we will have more info every day!

You can bookmark the Companion App here and join me on watching the clock tick down to launch! 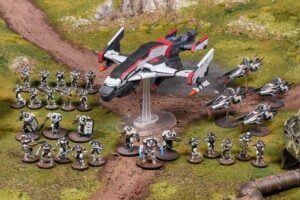 The Enforcers are the hard-hitting elite soldiers of the Council of Seven, the ruling body of the GCPS. This set is a great way to start your Enforcer army, or expand an existing force to challenge your opponents and enforce the will of the Council! Learn more about the game and keep up to date with the latest Firefight news here. 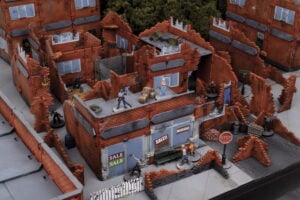 This wargames scenery can be assembled in a variety of different ways, and contains a mix of modular intact and ruined Battlezones scenery tiles and several sets of accessories, including stop signs, bins, fences, fuse boxes and other details. You can expand this scenery set using other kits from Mantic’s Battlezones Tile System. Also compatible with the most popular superhero skirmish game. Terrain Sizes: 1, 3, 4, 5 Models supplied unassembled and unpainted in coloured plastic.