By now you should be aching with excitement for the release of Firefight! But what faction will you take command of in the vast Galactic Co-Prosperity Sphere? In this new series of blogs, we’ll be looking at the background of each faction and finding out how they play. Today, we’re reviewing the Asterians. 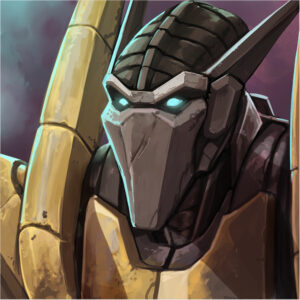 The most technologically advanced and sophisticated race in the known universe, the Clades of the Asterians know only too well the danger inherent in economic strength and military might. Wisdom earned at great cost through painful past lessons has made the Clades cautious. Its reluctance to overuse its power is perhaps the only thing that has, so far, saved the human race from being wiped out entirely.

Times are changing though. Asterian society is dedicated to Unity – a sensitivity to the patterns of energy that underpin all life in the universe – and to maintaining the balance between life and death. But, as the galaxy grows more dangerous, and as news of atrocities and calamities reaches Asteria from its network of spies, Asterians are becoming divided. There are still those that urge caution and warn against risking much and gaining nothing. But those who counsel that war is inevitable, that the balance has already been pushed too far to be neglected any further, are gaining in strength.

Asterian society is highly traditional and strictly regimented. Rituals dictate the day-to-day life of its citizens, from rising in the morning until the setting of the suns. This respect for tradition – and the diktats of the Tesseract – has for generations protected Asteria from repeating its past and falling into destructive excess. The Tesseract consists of the greatest minds in the Empire and can be accessed in great halls on many Asterian worlds. It serves as the Empire’s conscience as much as its government, maintaining its peoples’ morality as well as directing its resources. Recent events though have threatened to reduce the Tesseract’s power, perhaps permanently and perhaps fatally. 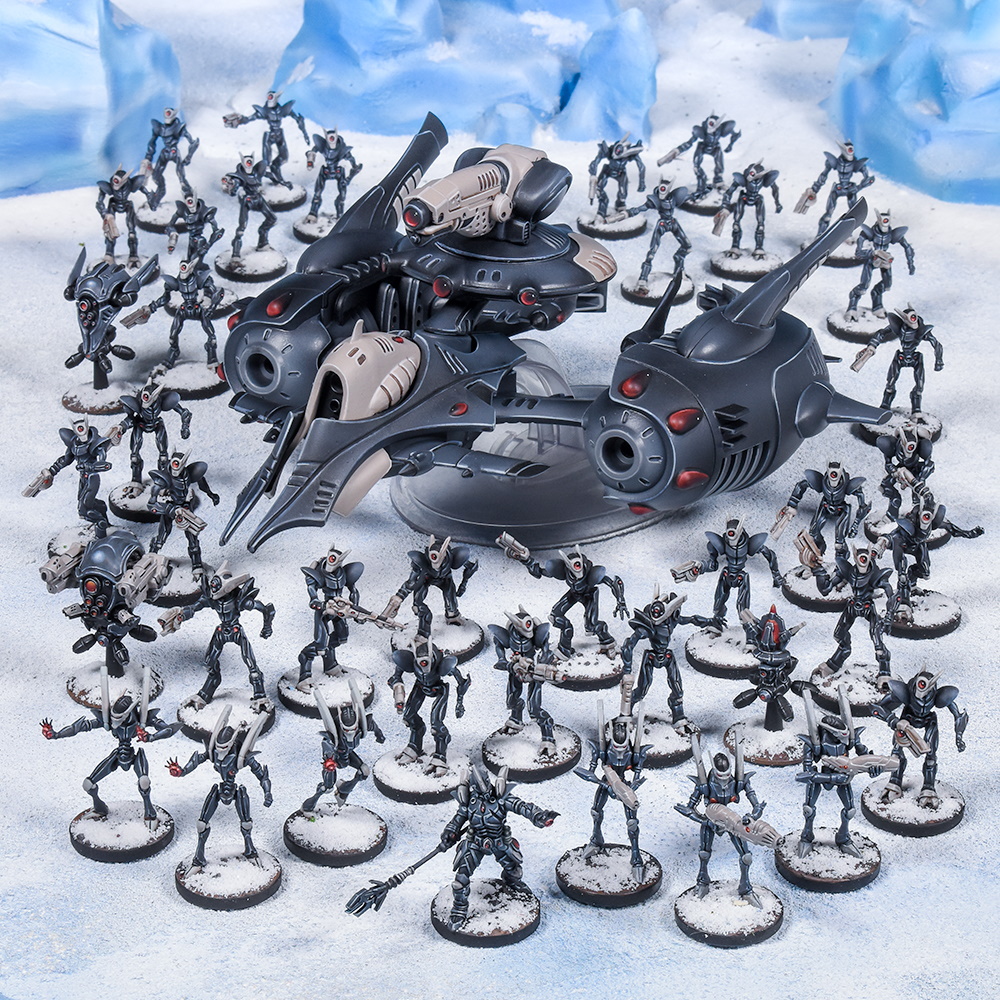 Many Asterians find their home amongst the monastic houses of the warrior clades. After many years of harsh training and rigorous mental conditioning, the greatest of them may be elevated to the rank of Shuuri and command Cyphers in battle. An Asterian army is an impressive sight, comprising rank upon rank of implacable armoured warriors, supported by fast-moving tanks and mobile gun platforms. An Asterian Strike Force can often appear capable of overwhelming their enemy through sheer numbers alone. This though is something of an illusion. Few Asterians will ever set foot anywhere near combat. Such is their abhorrence of violence and reverence for life, Asterian life at least, Asterians long ago perfected the art of drone warfare.

Chris Cowburn is here to describe how the Asterian force plays in Firefight! Over to you Chris.

Aloof, superior beings that are highly technologically advanced. Their armies are made up mainly of automatons, constructs controlled by Asterian pilots from orbit, keeping the Asterians largely safe from the consequences of war.

Asterians are all about Balance, so a combined arms force is the ideal option. If the enemy finishes the game with the same number of ‘living’ models as the Asterian force, victory should be assured. 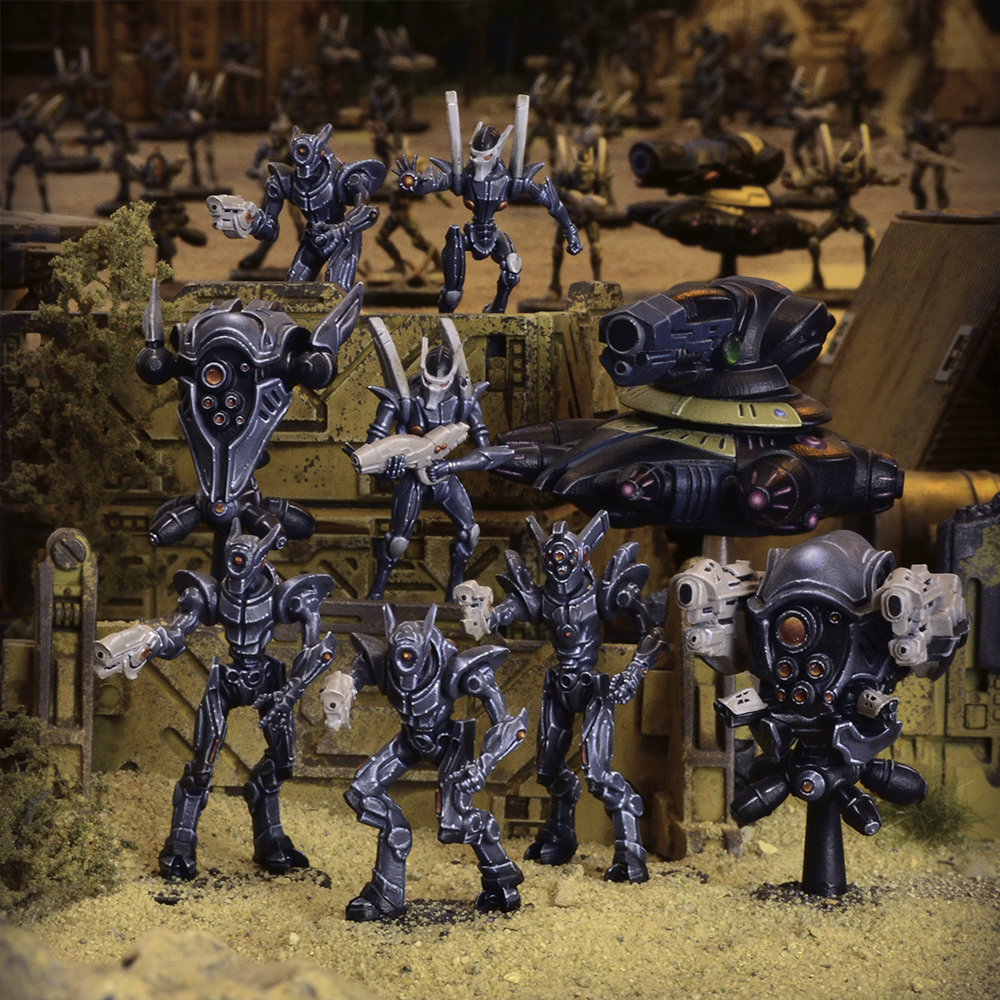 Marionettes are the most numerous constructs used by the Asterians. These can be taken in squads of 10, meaning they can lay down a lot of firepower. What’s more, they can take one of three drones to enhance their role further: Communications Relay, Noh Rifle drone, or a Cloaking Device.

Cyphers are incredibly advanced, even compared to Marionettes. Their in-built targeting systems means they are incredibly accurate shooters, with a RA stat of 3+. They also have energy shields built in, meaning they can absorb enemy attacks before they start taking damage. And with the option to buy a Shield Generator, they can regenerate these shields throughout the battle.

The Kalyshi are a fast close combat unit, and will be hitting on a 2+ if they manage to perform an unhindered charge! With AP1 as well, they should be able to reduce the combat effectiveness of their target, at least. They do not have the highest armour stat though, so are a bit of a glass cannon. As a result, you have to be careful and move them when the time is right. 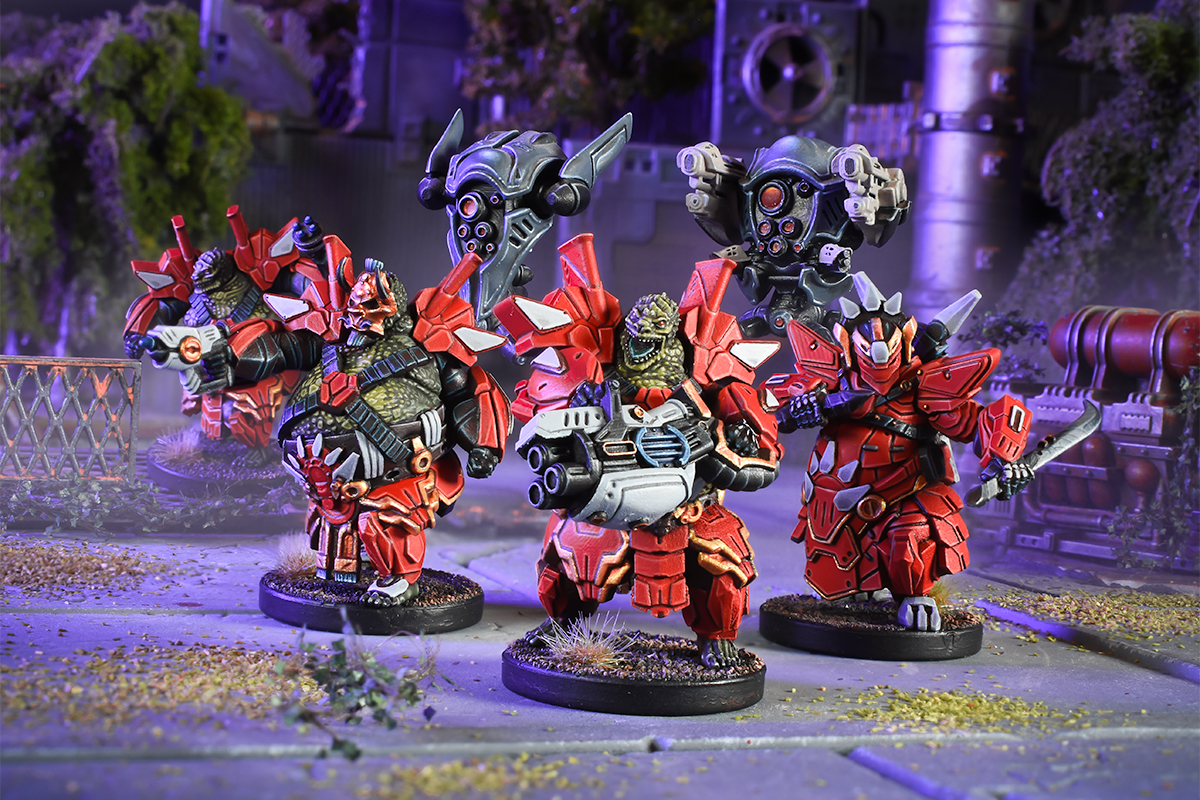 Onto the Specialists, and the stand-out performers for me are the Weapon Drones. If fitted with the Heavy Fission Beamers, then any target hit should be taking damage thanks to their high AP value. Alternatively, the enemy can be armed with a Plasma Vortex, or a Pulse Bombard. If the latter, they can sit behind your army, firing its indirect weapons into the enemy and causing blast d4 hits! If the dice gods are in your favour, this could be 16 hits per turn.

The Matsudan also sit within the Specialist option. The Matsudan Combat Team are a very tough nut to crack. Ar6+, 2 HP each and Resilient (1) built in, they will take some effort for the enemy to neutralise. And if they manage to get into Assault range of the enemy, the number of attacks they can unleash will give them a decent chance of winning any war of attrition. 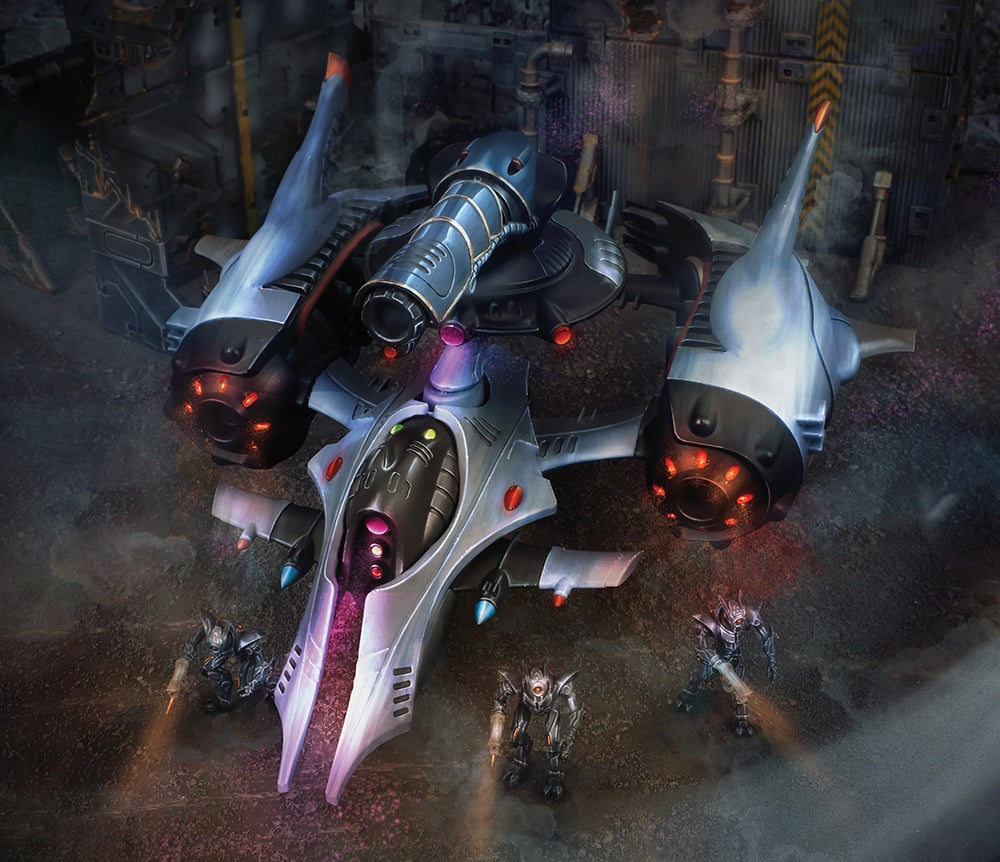 Let’s talk about the Chroma Force Platform. They have Energy Shields built in, so the enemy shouldn’t be able to take these out with one salvo. Their standard weapon is the Super Heavy Plasma Vortex with two shots, each doing Blast D3 with AP3, which means these guys mean business. And with their speed, you should be able to keep them out of harm’s way long enough to really hurt the enemy.

Moving with an agility that belies its size, the Chroma Force Platform is one of the most devastating vehicles that the GCPS has ever faced. Mounting super heavy variants of either the Plasma Vortex or Fission Beamer, it hovers above the battlefield providing heavy fire support to Asterian ground troops

The enigmatic Asterians carved out their huge Empire long before humans had even thought it was possible to leave old Earth. The Asterians’ greatest fear is the human interest in the Silent Lands and the horrors that will unleash. This set is a great way to start your Asterian army, or expand an existing force to challenge your opponents and put the young, upstart expansionists in their place!

Clades ensure that each Spectra is equipped with the latest stealth and energy shield technology. Spectras are only deployed in swift, surgical strikes when the need is dire.