Today we’re delighted to say that the core Kings of War: Vanguard rules are available to download from the Mantic website. Right from when we started planning Vanguard, we always wanted to get the rules out there to as many people as possible – which is why we’re currently running a half price rulebook offer on the website. However, if you want to get a taste of the rules, before the gorgeous 160-page rulebook arrives through your letterbox, then the free digital download is a great place to start.

To make things easier, we’ve also split the download into three different files: core rulebook, warband lists and a summary sheet. You can read what’s in each of these below. 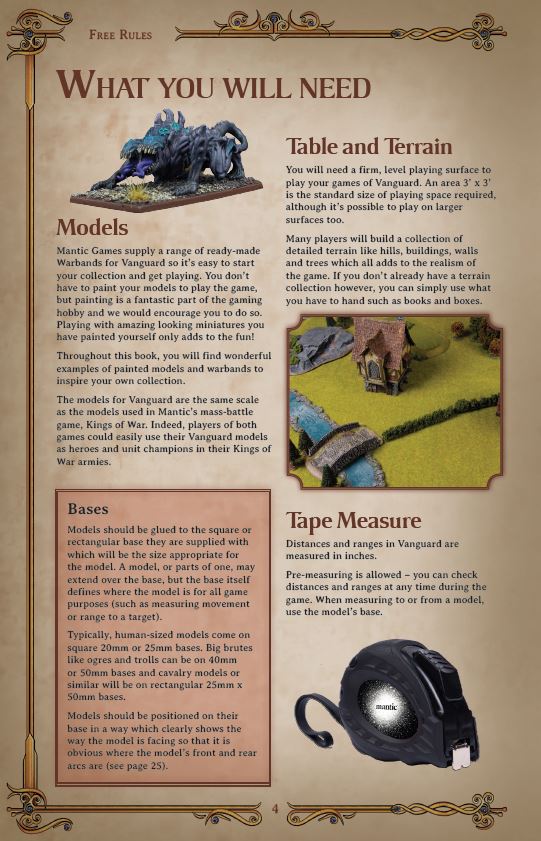 The core rulebook contains the basic rules for Kings of War: Vanguard. This will be very handy if you’ve already got the rulebook and just need something to refer to when checking a rule. It has the basic rules required to play a game of Vanguard, so if you want to get warmed up before the official release later this month, you can start playing some games with your existing Kings of War miniatures right away.

This free version of the rulebook includes 2 of the 12 scenarios so you can try out the standard Supply Grab mission, along with the Destroy the Baggage Train mission. Of course, in the full rulebook you’ll find all 12 scenarios, along with the rules for playing in a campaign, advanced spell lists, more equipment and hooks with Kings of War. This free downloadable rulebook is designed to give you a great taste of the rules, before you decide to gobble up the full thing. 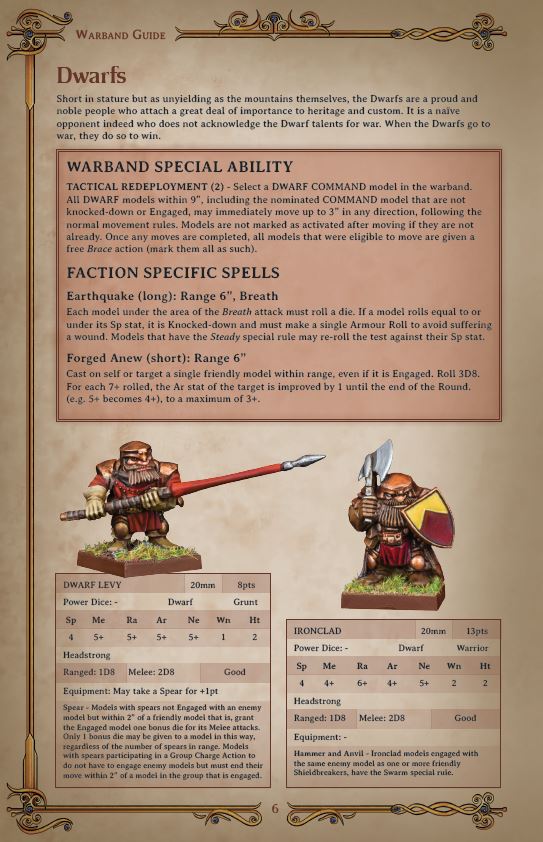 Creating the warband cards and including them in the Vanguard starter and boosters sets allows us to keep growing the range, without the need to produce a new book every time we want to create a new hero or commander, for example. What’s more, trying to balance dozens of units for 14 factions right from day one would have been a mighty task. Plus, we’ll still be releasing a PDF of factions introduced in Uncharted Empires, e.g. Varangur, so that’s even more units to balance. The inclusion of the warband cards also allows us to quickly release new warbands (2019 already has at least four on the schedule) and respond to any changes in the meta, by releasing individual units when required.

What’s more, with the standard eight entries, you’ve got plenty of options when it comes to creating your warband. Do you go for lots of grunts? Do you swap out the spells on your spellcasters, as we covered here? You can even give your heroes mounts to make them faster and more powerful in combat, or upgrade your fighters with new equipment, which you can read about here. These core lists give you plenty of tactical options that we’ll build on in the future with new releases.

We also looked at the Kings of War range to pick those miniatures that players are most likely to already have in their collection, so you can start playing straight away. But, of course, the new miniatures are going to be so frigging cool that you’ll want to get them anyway… just wait until you see what we have planned for 2019 😉 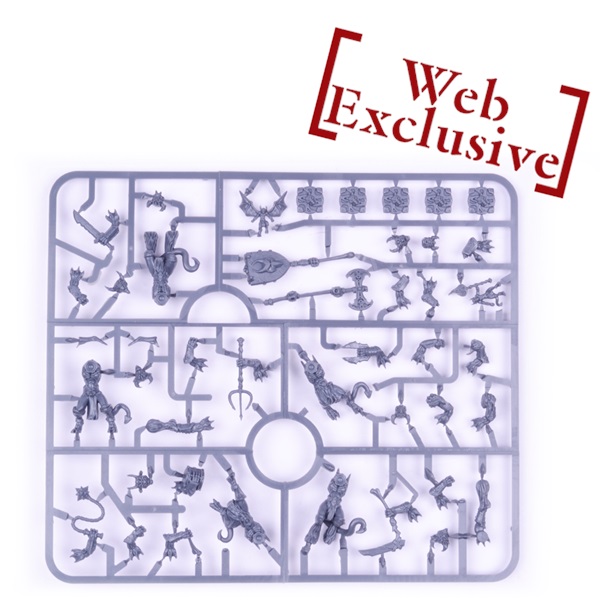 We also realise that a few of you may have multibased a lot of your core troops for Kings of War, so might need to pick up a handful of grunts/warriors to bolster your Vanguard warband. Well, the good news is that we’ve expanded the range of individual sprues available on the website, so you’re able to easily buy miniatures like the Succubi or Naiads, for example, without the need to buy a whole new Kings of War unit. Check the sprues here.

Finally, the last file to download is the summary sheet, which gives you a brief rundown of all the actions, power dice abilities, etc. that you can use in the game. Again, this is great if you just want to print it out and have it alongside you while you play.

Of course, once you’ve read the free rules you’ll definitely want to purchase that beautiful 160-page rulebook, which is only half price until October 27th (so time is running out). You can get this offer in-store or from the Mantic website.