The world of Mantica has many mighty heroes and characters of lore, some of whom are willing to fight for a worthy cause or the promise of coin. Some of these heroes are valued skirmish warriors that a Vanguard Company can hire as mercenaries

If either player wishes to, they may add a single MERCENARY model to their Warband (this is marked on the model’s card). These sell-swords use up points as normal from the player’s point allotment for choosing their Warband for the game. In addition, in order to hire the mercenary, the player must pay for their services out of their Warband’s unspent CG as a hiring fee.

Mercenaries will have types such as LARGE or SPELLCASTER, and sometimes COMMAND. The Mercenary’s type(s) count towards limitations of selection as normal.

Mercenaries are not added to your Warband roster, and must be hired (or re-hired) before each game they participate in. They do not gain XP. Opposing players may hire the same mercenary model – in reality, one or the other will be an individual of comparable skill and ability, trading on the reputation of the real thing. The same reasoning applies to mean that Mercenaries cannot be killed and made unavailable in later games, unless a campaign organiser decides otherwise!

Although Mercenaries are intended for use in campaigns, there’s absolutely nothing to stop you using them in your one-off games. Plus, we’re sure that tournament organisers will look at potentially including the mercs as options too. Anyway, without further ado, let’s take a look at the first two mercs for Vanguard. 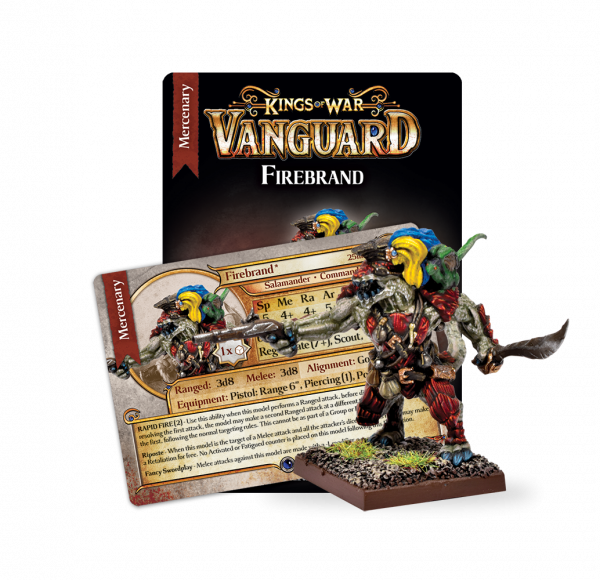 Armed with a deadly flintlock pistol, Firebrand is no joke when it comes to combat. She also has a couple of special skills that portray her incredible skills in swordplay and general derring-do. Also, if you’re a Salamander player in Kings of War, you can add Firebrand to your army too. Pre-order Firebrand here. 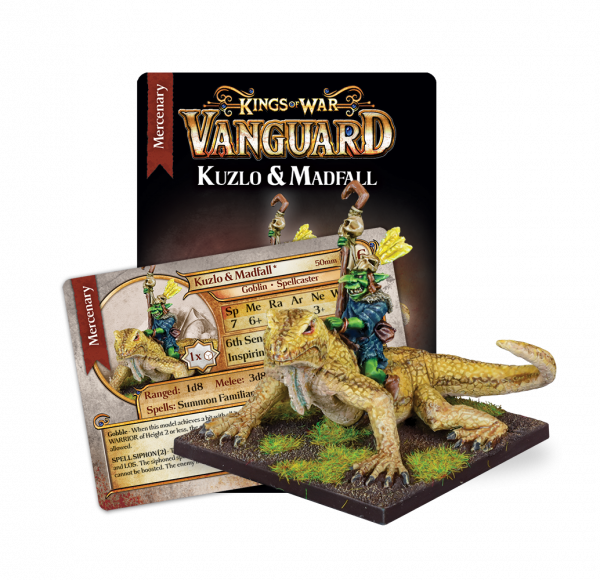 Originally Madfall the giant lizard was set to become an ingredient for one of Kuzlo’s potions. However, when it became clear that Madfall excelled in eating any enemies that threatened to eat his master, Kuzlo quickly changed his mind. This tendency to eat anything that moves is represented by the Gobble ability, which allows Madfall to eat Grunts and Warriors in combat. Remember, thanks to Clash of Kings 2019, you can also add Kuzlo to your Goblin Army too! Pre-order Kuzlo & Madfall here.