Today we speak to… Rob Burman

I’m Rob and I’m a goblinaholic… 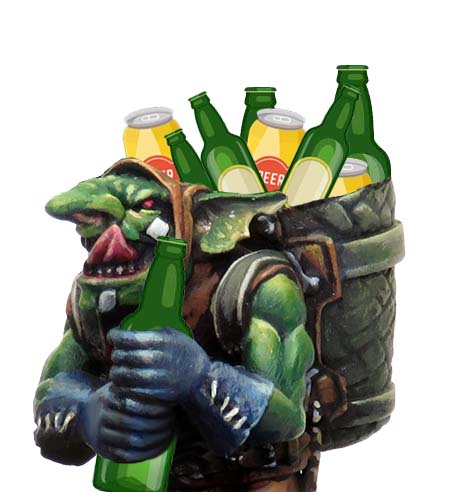 So, I heard about Mantic Games in a bit of a roundabout fashion. I happened to be visiting Hornby (makers of toy trains and diecast cars) and while there noticed a box of Mantic elves that were bundled with the Humbrol paints. Although I had played fantasy wargames around the age of 11, I hadn’t played for years but something about it caught my eye and I decided to find out more about Mantic. I ended up interviewing Ronnie for the magazine I was working on and, after that, started following Mantic’s progress more closely. I backed the first DreadBall Kickstarter and, once that arrived, it totally rekindled my passion for wargaming. I joined a local club (War & Peace), had my first demo of Kings of War and the rest, as they say, is history.

It probably comes as no surprise to hear I play most Mantic games, however, I’d say my favourites are Kings of War, Deadzone, DreadBall (UK champion 2018, you know) and the recently released OverDrive, which I helped create.

DreadBall has a really special place in my heart. It’s the game that got me back into the hobby and it’s such a great game. I really like it because it’s a game that rewards risk and there’s nothing quite like pulling off an amazing play against all the odds.

Then again, I love Deadzone because it’s easily the fastest and easiest wargame I’ve ever played. The mix of factions is really fantastic and mechanics – particularly the exploding 8s – create some truly cinematic moments… all helped by the true(ish) line of sight rules that force you to get down and see the game from a model’s eye view.

However, I think my favourite (at the moment) is probably Kings of War. There’s nothing else in wargaming that’s quite like building a mighty army of miniatures and then pushing them around the tabletop. I’m the first to admit that tactically I’m not the best, but I love the spectacle of big battles and this is something that Kings of War delivers by the bucket load. 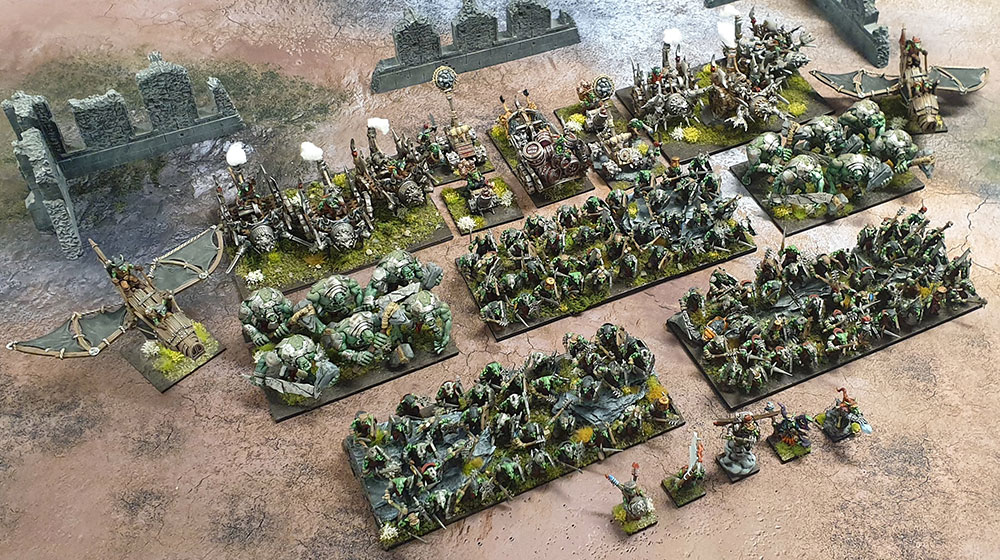 Well, I tend to keep this a secret but I think it might be goblins.

Ever since I first got into the hobby when I was 11, there was just something that really appealed about goblins. I think it’s probably because they blur the line between really, absolutely evil and somewhat amusing. It could be something to do with the fact Gremlins is one of my favourite films too.

I also love the variety of minis in the range – from the lumbering trolls, to hordes of cackling goblins and ramshackle war machines. They really help to bring lots of character to the table. I actually tallied up my current goblin collection for Kings of War the other day and was slightly surprised to discover it was 5,000pts. Although this doesn’t include several hordes of old hard plastics that I’ve replaced with the awesome new ones.

What’s more, their playstyle appeals to me when playing Kings of War. I like that idea – perhaps foolishly – that it either goes really well for them, or they start to run away. Anyway, the fact that a weapon with Blast might not explode properly, or a war engine may miss its target completely, feeds into the narrative and that’s something that I enjoy.

Again, that’s a super tough question and it changes over the years – particularly as we release awesome new models. I guess I might have to choose the Winggit (I can hear Bob Point booing at the screen). For me this really sums up the goblins. It’s a totally ridiculous design, no one is really sure how it works, but the two goblin pilots appear to having the time of their life. 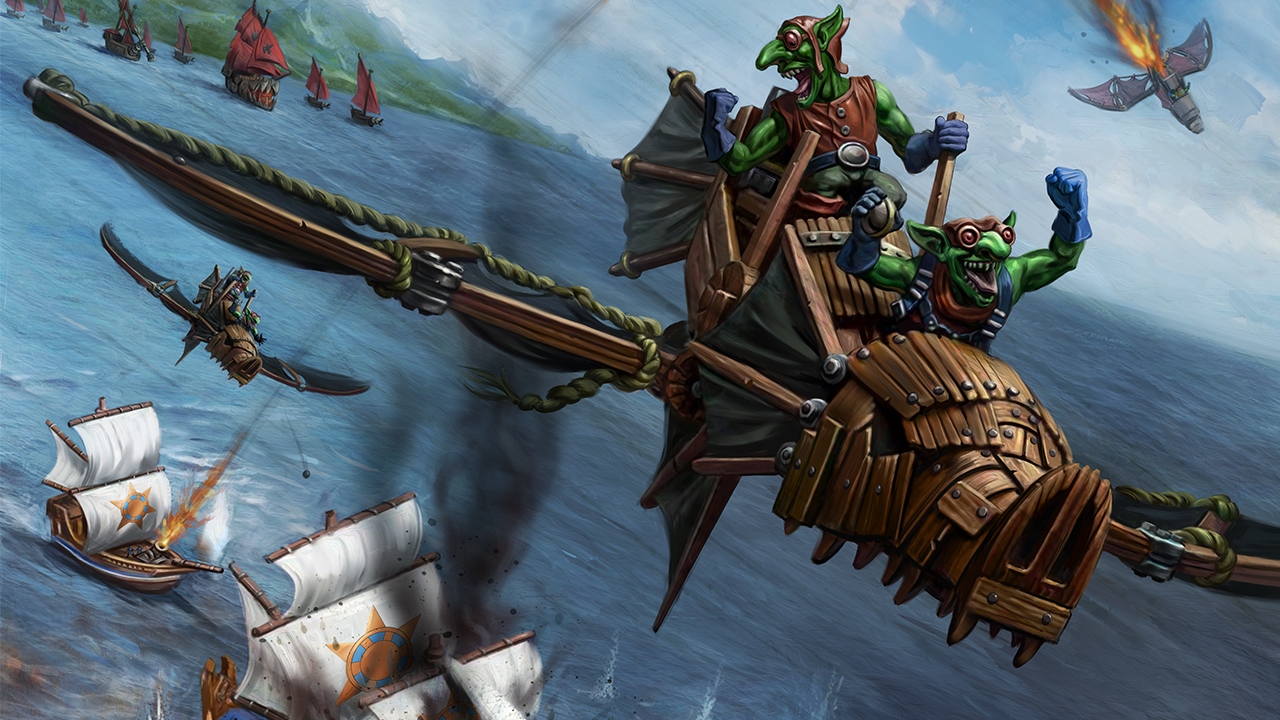 The hard plastic goblin kit deserves a mention though. I never thought I would enjoy painting 120 goblins but the sheer variety of weapons, heads and shields meant that every goblin felt a little different and helped to break up the monotony.

I’ve got a work in progress Salamanders army that I’m trying to finish. It’s been a bit delayed as I get distracted by other projects that keep coming up. I really want to add three regiments of Corsairs and then I reckon I’m done. Haven’t even managed to play a game with them yet but I like the fact that it’s a bright and colourful army, rather than the goblins which are, obviously, quite a lot of green. 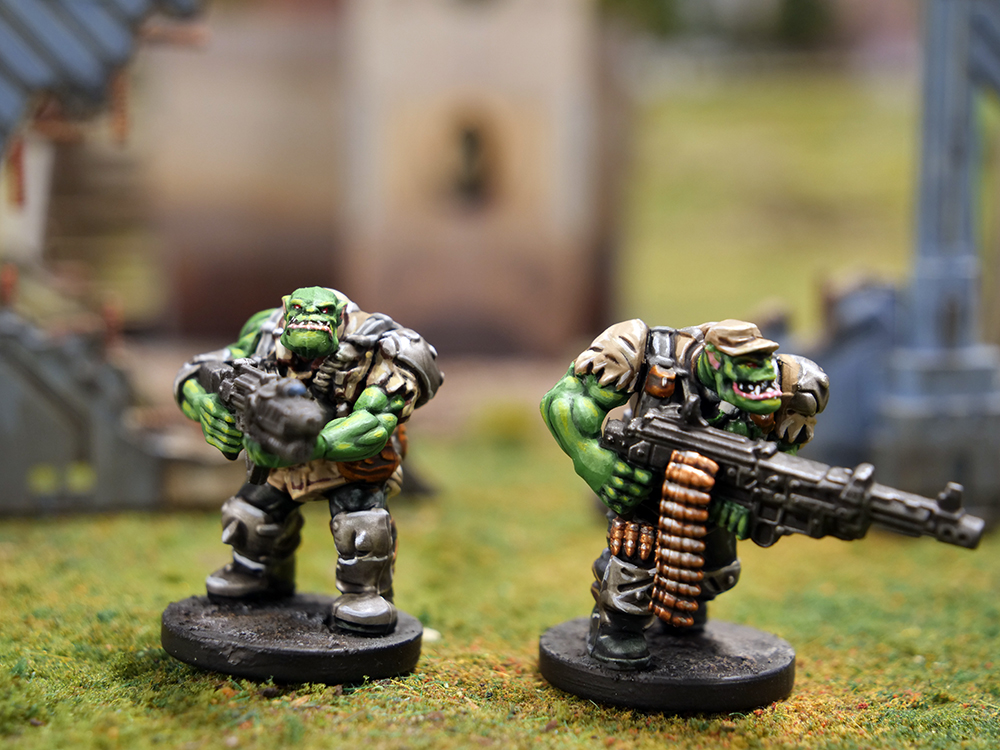 I was lucky enough to acquire (definitely not steal) one of the test sprues for the new hard plastic Marauders. The greenskins were my first love for Deadzone, so feels natural to be going back to them. The hard plastics are great, with plenty of character and personality. I was intending to only do a Deadzone Strike Team but, who am I kidding, I’ll definitely expand the fore to a full Firefight army.

I’d just like to take this opportunity to give a shout out to the Mantic community. You’re such a great bunch of people and it was thanks to how welcoming this community was when I first got back into the hobby, that I carried on further and further down the rabbit hole.

Thanks Rob! And thanks for keeping it fairly Goblin light!

Check back next Monday for another instalment.

The only thing more dangerous than a small Goblin army is a Goblin horde. When a Biggit gets important enough to rally this many Goblins to his banner, he becomes a force to be reckoned with, their numbers serving to offset their natural cowardice as well as overwhelm the enemy under a swarming tide of vicious, stabby little bodies.

A seemingly random jumble of wood, metal and bloody-minded goblin determination, the Winggit is a contraption that really shouldn’t be able to take off the ground. But when it does, it provides an eye in the sky and rains bombs upon its foes.

This new two-player starter is the perfect introduction for Kings of War – the mass fantasy battle game. War in the Holds tells the story of the brutal battles between the evil goblins and equally wicked Ratkin. Includes an exclusive Ratkin Warlock and exclusive Goblin Wiz!