The Deadzone summer campaign is up and running – hooray! In the first week we’ve had more than 200 battles submitted and it’s shaping up to be our biggest campaign yet! Remember, if you want to get involved there’s still plenty of time. You can even download the rules for free to give the game a go. Plus, just by taking part each week there’s the opportunity to win some awesome prizes.

Anyway, today we’re continuing our series on staff strike teams. If you remember my last blog, about the Marauders, you’ll hopefully remember that I said I was working on a second Nameless Strike Team. Well, the good news is they’re almost ready to take to the tabletop… and I’ve gone for a slightly different list to Martin’s Nameless, which we covered previously. The great thing about the summer campaign is that you’re not restricted to playing one faction. So, although I’ve got my Marauders to fall back on, I can also experiment with the Nameless and Rebs factions that I’ve been painting.

Anyway, let’s take a look at those Nameless…

I went through a number of Nameless builds before finally settling on this one – although I’ll probably refine it after some plays. It’s quite melee heavy but with a little shooting support from the Rifleman, Gunslinger and Bathomite. This list was built using the Nameless Faction Starter (which has proved so popular it’s temporarily out of stock), plus a few extras. 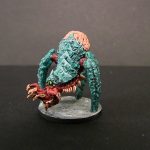 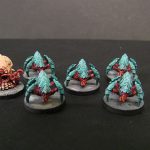 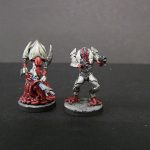 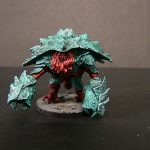 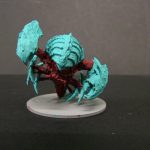 Psychotroid (36pts) – the Psychotroid is a bit of a points sink and I did consider The Blight as well because it’s 6pts cheaper. However, the infamous Aura of Dread splat is too good to pass up. This splat allows you to move an opposing unit one cube directly away from the active model. There’s been a few comments online about this ability being too overpowered because you could theoretically push an enemy out of combat and into combat with one of your friendly units. However, in practice I’ve yet to really see this tactic pulled off. Instead, I’ll be using the Aura of Dread to move opponents off objectives.

5 x Scuttlers (8pts each) – I adore the Scuttlers. Even the minis make me warm and fuzzy. They’re super cheap at 8pts each and they’re extremely small, which should make them easy to hide. However, it’s that Horde ability that has me the most excited and that’s the reason I’ve gone for five. “But how have you got five?” asks the imaginary reader of this blog. Easy! I got the Nameless Faction Starter and then picked up the Star Saga Terror in the Deep expansion, which contains three of each type of minion. Lovely stuff.

Inker (8pts) – the Inker is there as my portable smoke grenade, thanks to its Ink Sac ability. I’ve mostly got it as back up during the early turns, so I can hide my melee troops from enemy fire while they move into position. It’s unlikely to ever enter combat but could be useful for grabbing objectives.

Rifleman (15pts) – with a range of 10, the Rifleman will be sticking on the backline and, hopefully, picking off the opposition. It also has the Triclinic Shard ability. This tags the enemy for the entire game, which then grants an extra dice in close combat. Cast your mind back to those lovely Scuttlers because Triclinic Shard + Horde = buckets of dice. Perhaps I need more Scuttlers?!

Gunslinger (15pts) – another unit with Triclinic Shard but it only has a range of 3. But wait, there’s more…

Ogre (35pts) – in theory the Gunslinger will be a one-two punch with the Ogre. The plan is to keep these two together and use them as a mini team. The Gunslinger tags someone with the shard and then the mighty Ogre goes in to finish them off. Its size three, so is likely to get a size bonus, combined with the standard bonus for moving in and the extra for Triclinic Shard. Boom! Three extra dice. What’s more, by keeping the Gunslinger and Ogre together, the Gunslinger will benefit from the Ogre’s Defender Shield. This will increase its armour from 1 to 2, and should hopefully make this a hard squad to break up.

Bathomite (27pts without weapons) – at the moment, my Nameless list is missing any decent armour piercing, so if I come up against an Iron Ancestor, I could be in trouble. Thank goodness then for the Bathomite! You’ve got a few options when it comes to the Bathomite, you can turn it into a melee beast with the likes of Ripping Tentacles or Ravenous Maw, or focus on long-range shooting. I’ve gone for a bit of both in my list. I’ve used one hardpoint to give it a Crystal Cannon, which will ensure some armour piercing punch at AP4, alongside the Ravenous Maw if it gets into combat. Also, a nice bonus is that the Bathomite could tag an enemy with the Crystal Cannon, so it then has a bonus in close combat. In total, with the Ravenous Maw and Crystal Cannon, the Bathomite comes in at a whopping 48pts (5VPs), so I hope it’s worth it. I also need to finish actually painting it.

So, there you have my work in progress Nameless list. To be honest, I’m still keen to experiment with a few more builds. The Assassin looks like tasty option to beef up my close combat potential, as does the Terror (although it’s a little expensive). Stay tuned to the Deadzone campaign site for a battle report featuring this Nameless list to see how it performs. In the meantime, have you chosen your faction for the summer campaign? Or are you thinking of switching? Let us know in the comments below…