My Warband, My Story 2: Rob’s Goblins

In the gloom of the setting sun, Gritter could just see the baggage train trundling down the forest track. Hidden among the shadows of the trees, the goblin warband would be invisible. This is where Gritter felt most comfortable – tucked away in the embrace of darkness, ready to spring upon his unwitting enemies. Forget the grime and blood of the battlefield, he preferred the quick slash of a hidden sword emerging from the dark.

His sharp ears picked up the sound of the horse’s hooves plodding on the mud, while the Basilean Men-at-Arms chatted casually about their lives back in the Hegemony. Gritter spat as they complained about the stale bread they had as rations, while wishing for their comfortable beds back home. Gritter’s stomach rumbled at the thought of any food and he couldn’t remember the last time he had slept in an actual bed. So long as the cave was dry, he could sleep anywhere.

Behind him the Fleabags began to growl as they picked up the scent of the nearby horse. Gritter hissed at the Rabble to keep their steeds quiet. They needed the element of surprise if they hoped to overpower the Basileans quickly and grab the supplies. Grogger had tasked him with disrupting the supply line to the nearby Basilean encampment and Gritter was keen to please his King.

Gritter gave two sharp whistles – alerting the Spitters on the opposite side of the track to ready their bows. Meanwhile, the cart continued to rumble closer. Suddenly, Gritter was disturbed by increasingly loud chittering to his left. He groaned, as he realised Kackle and Fitz were arguing again. Gritter had pleaded with Grogger not to make him bring the siblings along, but they had their uses. They were some of the most powerful spellcasters Gritter had seen – and their arguing only seemed to increase their magical abilities.

He furiously tried to catch their attention and order them to be quiet, but it was too late. A rogue fireball launched from Fitz’s wand and set a nearby tree alight. The horse whinnied in fright, almost toppling the cart behind it, and the Men-at-Arms drew their blades or loaded their crossbows. So much for the element of surprise, thought Gritter as he screamed ‘charge’ to the hidden goblins.

On the opposite side of the track, the treeline exploded. With a ferocious bellow, Dum the troll burst from the trees swinging his mighty club. It caught a Man-at-Arms square in the chest and sent him flying. Gritter chuckled – perhaps he still had a few surprises left.

Gritter’s Slinkers in all their unpainted glory. The Troll is still hiding.

Hello, it’s Rob here and, let’s face it, this was bound to happen. If you’ve ever heard me talking on podcasts or read some of my posts in the various Fanatics groups, you’ll know that my true love is goblins. Yes, I know I wrote those other blogs about Abyssals but secretly I really wanted to paint them green and pretend they were goblins. Anyway, with 400pts of Abyssals now safely in the bag, it’s time to start my next project – Gritter’s Slinkers.

If you’ve read the free rules, you’ll know that the goblin list in the rulebook comes with 8 unit entries. Overtime we’ll be expanding this list and a full goblin warband list is among the first batch of releases planned for Vanguard in 2019. However, until that wonderful time, the 8 unit entries in the rulebook still gives plenty of options, as you’ll see below.

Ok, well this is quite an obvious one because there’s currently just the Biggit option available. However, that still gives me some options. Should I mount the Biggit to make him more powerful against smaller enemies? Perhaps a bow would come in handy? Particularly seeing as the Red Goblin Biggit miniature comes with a bow already. And that’s before you get to the other pieces of equipment, like potions or shields. However, I decided to keep my Biggit relatively simple and just gave him a Heavy Weapon to boost his Crushing Strength.

As you might expect, the grunts for Goblins are very cheap. The standard Rabble comes in at 8pts and the Spitter costs the same too. I wanted to include at least six Grunts in my warband, so I could unlock two sets of commander, support and spellcaster options. With this in mind, I immediately enlisted three Spitters, which will be useful when it comes to Group Actions.

With the Rabble, I decided to mount all three on Fleabags (using the common mount equipment option). This will increase their speed to 7 – so they’ll be very mobile – but it also gives them a +1 bonus in combat against smaller targets. Goblins need all the help they can get in combat, so this should allow them to quickly dispatch other grunts. 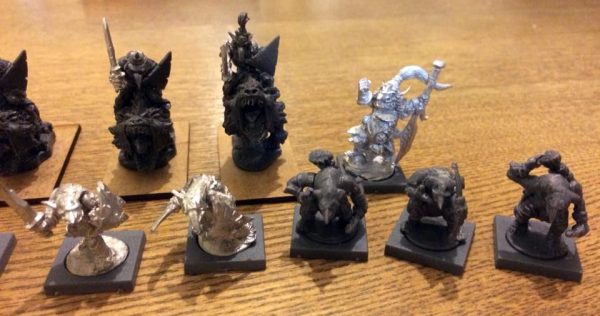 With the Spitters and mounted Rabble now accounted for, I didn’t have any room for the Luggit Warriors… but they’ll most certainly be added into my Company for a campaign.

Originally, I had planned to have two Mawbeasts in my warband because their Howl special ability is great for quickly getting around the battlefield and mobbing enemies. However, after looking at the goblin’s faction specific spell, Slink, I started to change my mind. Slink allows you to potentially re-activate a friendly model after it’s already been activated. This allows for some sneaky re-activation shenanigans, without the need for Force Fatiguing a model.

What’s more, with the Wiz’s Cackle ability, I can cast the same spell twice in one turn. This could allow me to reactivate two members of my warband. The only downside is, this spell hits on 6+ and is only within 6”, so the Wiz could be in harm’s way.

I also liked the other goblin faction specific spell: Shrivel. This can be casted against an enemy target, which then suffers a -1 modifier to any Melee or Ranged attack it makes for the rest of the turn. Again, considering that goblins need all the help they can get to survive, I thought this would come in handy.  The problem is that in a one-off campaign you can only give one faction specific spell to a spellcaster… so I just went for the easy option of two spellcasters so I didn’t have to choose. 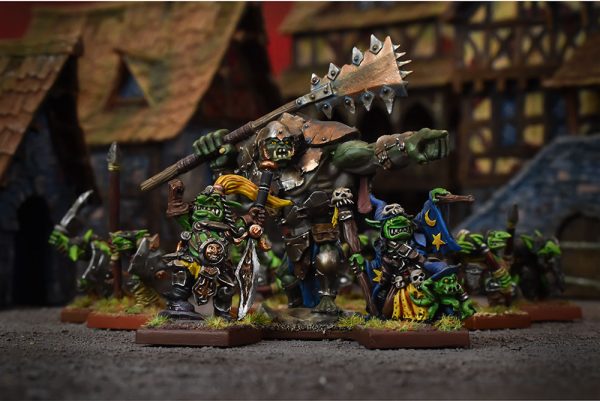 Thought I better have at least one pretty picture in here.

Finally, the last addition to the warband is a Troll. As you might expect, this is the heavy hitter of the squad. The Troll rolls 5D8 in melee and hits on 5+, so it should be able to do some damage. Plus, combined with the Wiz’s Slink ability, I’ve got the option to re-activate the Troll in the same round. Why take two trolls into the shower, when you can just Slink one?

Of course, this is all conjecture at the moment as I haven’t actually use the goblins. However, my mind is already brimming with possibilities for my lovely greenskins. The painting will start this week and I’ll hopefully have another update in a couple of weeks. Below you can see the list in full.