They knew they would die.. the Children of the Reaper were born of war and embraced battle. This time the fight was on their terms! In the cold wastes of the North, the Abyssal Seductress Ma’baya and her Bloody Knives would suffer. Not just from the biting wind and frost from the cold winter, but from his steadfast Elite crew of fighters. Korres the Ice Queen was already blasting the enemy with ferocious Windblasts and her Winter’s Bite, pitching Abyssals off the cliff face and sending them back to the hell from which they had spawned.

Mejer was prepared. His dual axes glinted brightly and he growled in anticipation of the coming battle. On this frozen hill top they had to keep the beacon lit. The Children of the Reaper were tasked with this vital mission and they would fight to their last breath. The main Northern Alliance force was yet to come up, and without the beacon as guidance who knows what numbers of his kin would be lost to this deadly weather…

Gooja the Snow Troll Prime was howling with rage. A veteran of 100 years of war, he lived for this. His vicious club still glistened with gore from their last encounter with these vile creatures. Maaier returned on his trusty Frost Fang with a message: “The Abyssal scum are here, prepare yourself!” This would be the final time Mejer would face Ma’baya… it would end here.. it would end now! “HOLD THEM BACK!!!!” 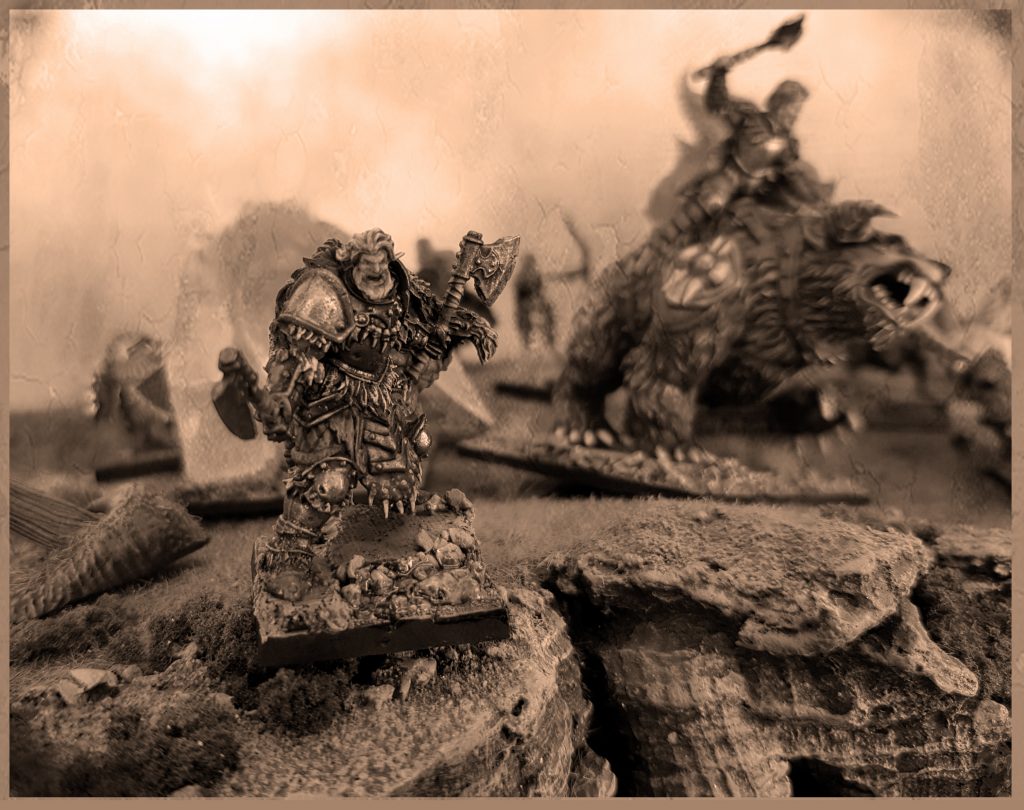 Hello Martin here, I do the Trade Marketing for Mantic and I’m first up with the staff Warband Blogs. I chose the Northern Alliance force for Vanguard as there is so much variety for painting and list creation. And as a 6′ something bearded fellow these grizzled warriors spoke to me! I’m not saying I keep a battle axe under my pillow at night… but I’m not saying I don’t either.

The first 200 point war band I have put together wasn’t a particularly scientific exercise. Basically, I just wanted to include as many big stompy things as I possibly could! So here it is….

First up is the Ice Troll Prime – having a large beast as my leader allows me to include another large model in my Warband, plus the model is beautifully sculpted PVC and was fun to paint. Anything with fur is fun as you can layer up the washes and then dry brush to give it depth. I added some extra gore as Dave in the office hates it… so obviously i had to do it 🙂 The Prime is a juggernaut of a fighter. Rolling 5 dice on melee with Crushing Strength (2) – what he hits, he destroys! He is also survivable with Regenerate, 5 wounds and also brings a white Power Dice to my dicepool. I gave my leader the Heavy Weapon equipment for 3 points which increases his Crushing Strength to 3! (total: 54+3 points for the equipment). 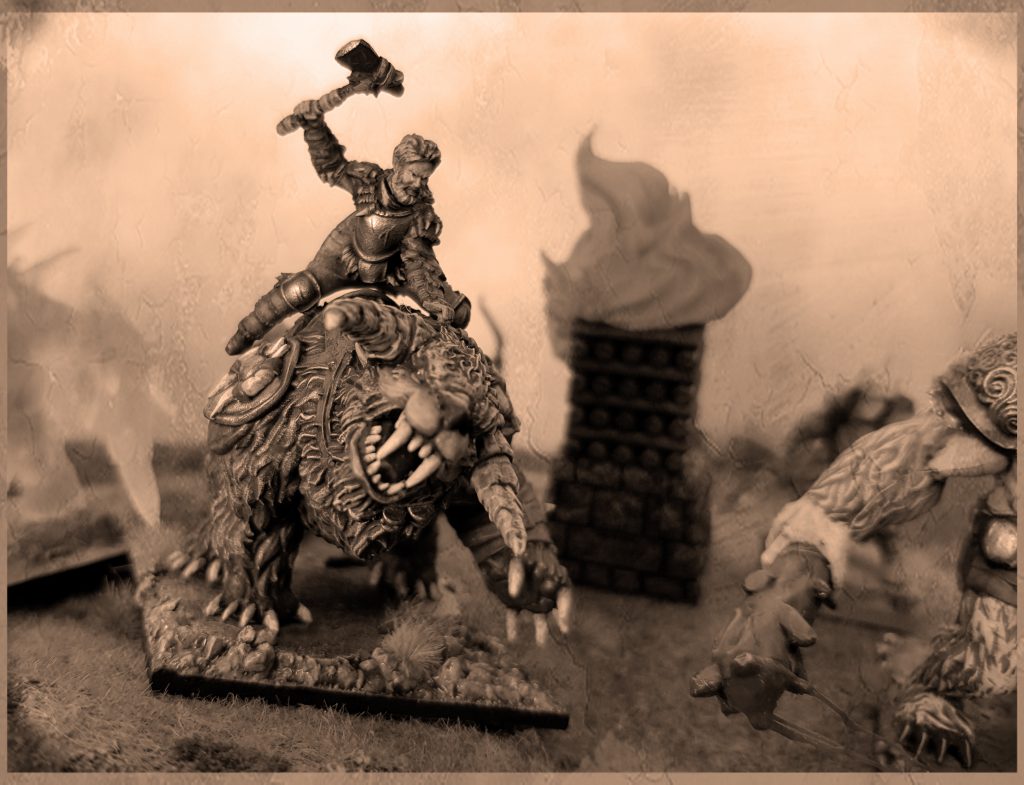 Next is The Frost Fang Cavalry – there was no way I wasn’t going to include this in my list. Look at it. IT’S INCREDIBLE. I honestly think this is one of the finest models I’ve ever seen us produce and I took real time and effort with painting it. This was my second Large miniature in my warband and offers me Crushing Strength 3. What’s more, Smash and Bloodlust are cool abilities to gain dice and stomp all over your enemies. Finally the Frost Fang is fairly resilient with a 3+ save and 4 wounds (35 points).

Unfortunately I couldn’t fit in the third Large miniature in my list. I just didn’t have the spare points… Matt Gilbert and his RULES! Grumble grumble. I wanted to put in the Ice Elemental, but he is on the sidelines waiting for his opportunity. Oh, and for those wondering where the Ice Elemental is on the pre-orders, he needs a little more time in the freezer and will be released next year. 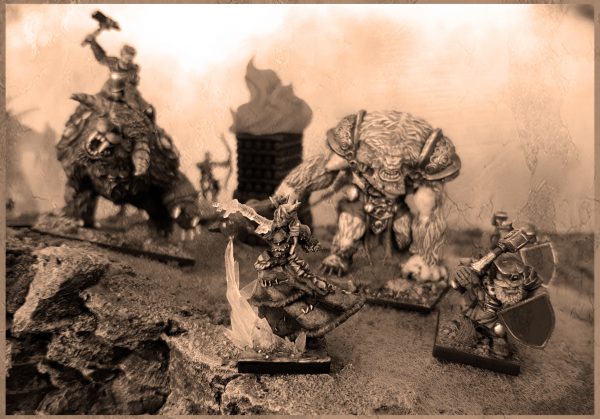 Ice Queen – got to have that magic in there. She is Inspiring, has some heal, some board control with Windblast and some pew pew with her Lightning Bolt. I was worried about being too melee focused so having some ranged abilities in there will be useful. She also brings a blue Power Dice to my warband. The miniature is beautiful and full of character. The ice blast resin piece really adds to her character (32 points).

For more support I added the Ice Kin Hunter. WOW. Good range attacks, Scout, Pathfinder and Marksman so she is getting to where she needs to be early, and re rolling 1s to hit. I see her as a bit of a solo model, off on the flanks doing her own thing (hopefully creating pin cushions out of the enemy – 26 points).

A Huscarl made my warband as a solid melee Warrior. Supporting the big guys with additional melee options. With Crushing Strength 1, he’s no slouch either (15 points).

Three Dwarf Clansman and an Elf Clansman filled out the requirement for grunts and the remaining points for my warband. Another bow is really useful as support and although slow, the Dwarves have Headstrong, so they always have the chance to clear Fatigue (35 points).

So there we have it. My initial list is fairly balanced and there are a few troops I’ve not used, but they are on my painting table ready for my next Warband list. I’ve tried to keep the paint scheme fairly muted.. with a name like ‘Children of the Reaper’ I wanted to use plenty of blacks, greys and browns. I’ve also themed all the bases with a frozen wasteland feel using water effects to try and portray ice where possible.

Models who will be used in future warbands are:

Cheers for reading, see you on the battlefield 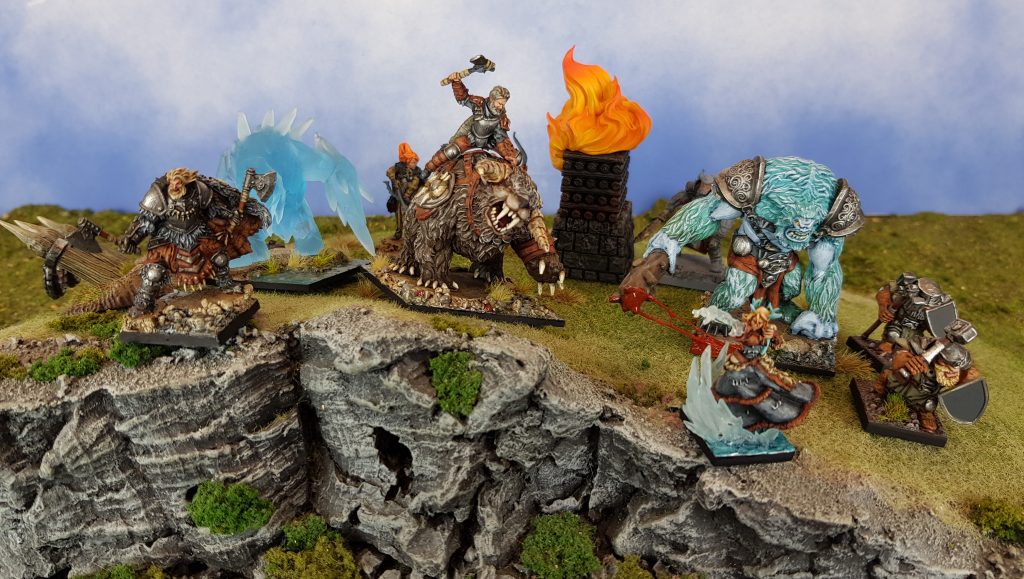