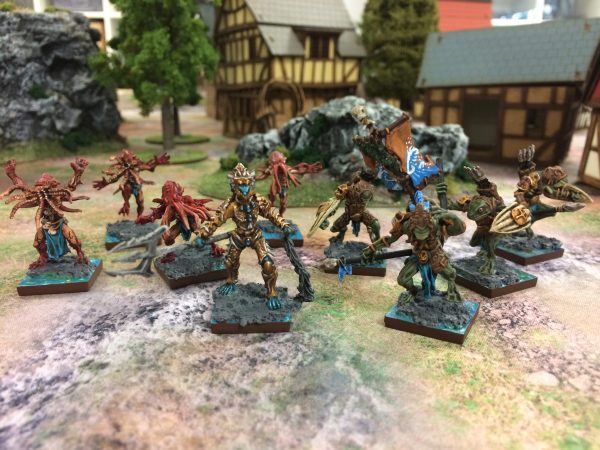 Zaba swam as fast as she could. Her legs kicked furiously as she swam up the river. Behind her, the other Riverguard struggled to keep up. She’d always been fast. Always been first in the rapid races back home. But now her speed came from a terrible sense of urgency.

Two days ago, during her routine patrols, they’d seen the goblins heading through the forest. Her scouts tracked them for a while, carefully leaping from tree to tree to make sure they weren’t spotted. At first, they were forced to listen to the inane arguments of the two magic users. Their constant bickering ensured they were easy to track through the undergrowth, plus the blundering troll could have been heard by even the oldest and thick-eared dwarf.

Eventually though, their leader snapped and told them to hush their constant yabbering. But it was the next part that sent a chill through Zaba – the goblins had somehow discovered the location of the ancient power stones. If the wizards unlocked their arcane energy. Well, she shuddered to think of the consequences.

Skip forward and here she was, swimming for her life to warn the Realm. She felt a flush of relief when she spotted the carefully hidden boundary markers to show they were nearing Ryber’s territory. The Centurion would know what to do – she hoped.

She spotted Ryber swimming towards her.

‘Trouble,’ she signed. Her web hands flashing quickly under the water. ‘Goblins. Have. Found. Power. Stones.’

A look of horror flashed across Ryber’s face. She motioned to a nearby Naiad.

‘Tell. The. Mythican. We. Will. Need. Him.’ With that they swam off to prepare for battle. 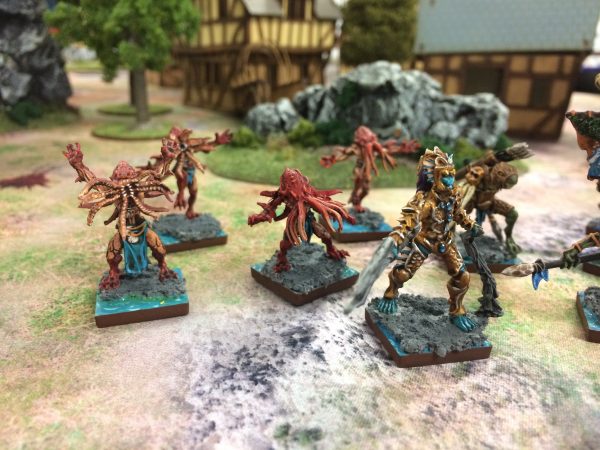 Hello Vanguard fans! It’s been a while but I’m pleased to say we’re kicking off a brand new round of My Warband, My Story blogs over the next few weeks. Since Vanguard first launched back in October, we’ve been busy playing here at HQ and most of us have taken a break from the factions we originally chose at launch. Martin has switched from Northern Alliance to Dwarfs. Matt went from Trident Realm to Salamanders (list coming soon for those) and I’ve gone from Abyssals to Goblins and have settled on Trident Realm (for the moment).

Why the switch to Trident Realm? Well, firstly I’ve always loved the Trident Realm miniatures. Units like the froggy Riverguard, Cthulhu-esque Thuul and crabby Gigas have always caught my eye. Perhaps it’s the fact I grew up by the seaside and they remind me of home *emotionally blows nose*. However, I wasn’t quite ready to start a new Kings of War army, so Vanguard proved the perfect opportunity.

The other element that drew me to the Trident Realm was after I realised how powerful knocking down units is. Just in case you haven’t played Vanguard yet (shame on you), when a unit is laying prone on the ground, it’s much easier to take them out. With that in mind, the fact that Riverguard have the Pound ability (which knocks an enemy down when you score three or more hits), helped to make up my mind.

As such, I started my list with 3 Riverguard Warriors at 14 points each. These are incredibly mobile units and their javelins have a range of 9” – which means their potential threat range is huge. I then teamed the Riverguard up with 3 Thuul warriors. My plan is for the Riverguard to knock enemies down with their javelins, then I’ll spend a power to immediately activate a Thuul (which hit on 3+) to pounce on the downed enemy. 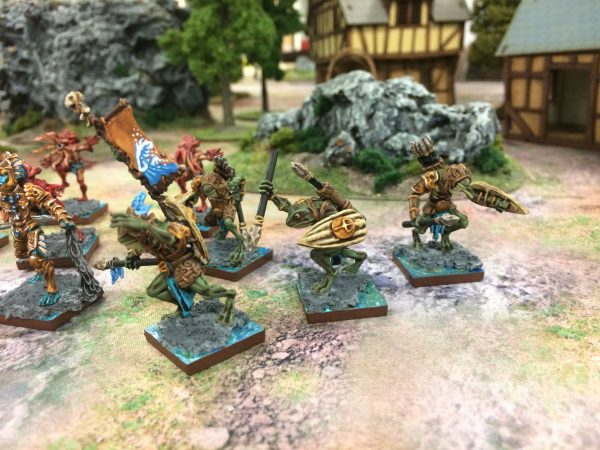 Trident Realm units are pretty expensive, so my 6 warriors take up a large chunk of my list (78pts out of 200). However, with the foundations in place, it was time to add some commanders! Along with having lots of knock down capabilities, I also want to maximise my Power Dice. This meant the first option was a no-brainer because the Naiad Centurion comes with a blue Power Dice and is no slouch in combat either.

My next choice changed when we recently launched additional units for each faction on the website (you can download the updated list here). As well as adding a Giga as an extra Large model, another new unit was the Riverguard Sentinel. This new Commander also has the Pound ability, but is slightly better in combat than the standard Riverguard and generates a red Power Dice. Ka-ching!

Finally, it’s always handy to have a Spellcaster in your warband and the Thuul Mythican is fairly cheap at just 26pts. However, it’s the Faction Specific Riptide spell that ensured the Mythican gained a place in my list. This spell has the capability of knocking down two enemy models – the problem is that it’s only got a range of 9”, which means the Mythican could easily end up in enemy charge range.

With the units in place I still had 7pts left to play around with, so gave the Naiad Centurion and Riverguard Sentinel a Lucky Charm each (handy for those Nerve Checks). I also gave the Centurion a Heavy Weapon (taking her Crushing Strength to 2) and the Sentinel a Potion of Concentration, which can be discarded to automatically pass a Nerve Check.

So far I’ve some pretty good results with this list and should be taking it to the Cry Havoc tournament in January next year. Hopefully I might see some of you there!