Sorry, we realise it’s been a couple of weeks since we posted anything about Zak, Dave and Rob’s progress for their Kings of War armies. Little things like the office party and Valentine’s Day have unfortunately gotten in the way of our weekly Tuesday night gatherings… however, that doesn’t mean the guys haven’t been busy on some quality hobby time at home (well, Rob and Dave have).

Rob has arguably taken the lead at the moment with five units painted: two regiments of Ironclad, a regiment of Shieldbreakers, a regiment of Berserker Brock Riders and an Ironbelcher Cannon. This clocks in at a respectable 670 points so far and he’s just about to finish off another Ironbelcher Cannon… well, it wouldn’t be a Dwarf army without a decent gun line, would it? 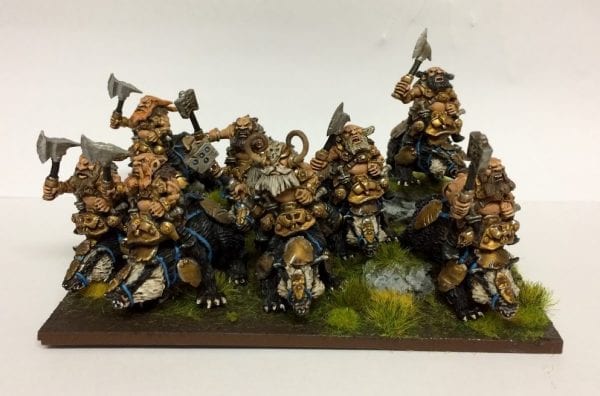 Rob’s Brock Riders, which features the metal command upgrade for his leader. Hmm… if only that were available on the website *hint hint* 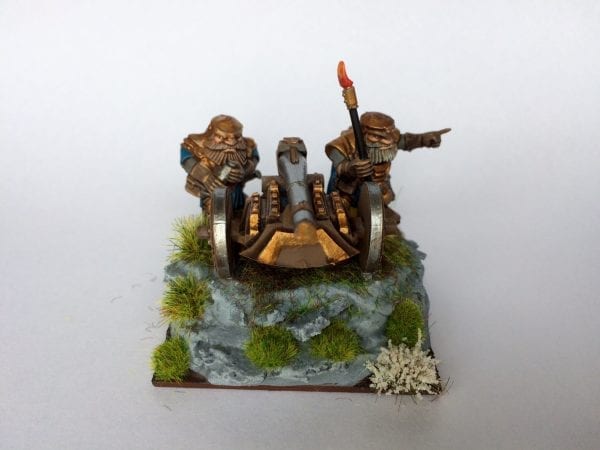 Don’t tell Rob that putting the gun on a large rock doesn’t actually help to see the enemy units better… or that all his flock appears to be falling off!

Dave is continuing to slog away at the Empire of Dust, with three units now under his belt: a regiment of Skeleton Spearmen, a Balefire Catapult and Cursed High Priest. He’s currently busy finishing off some Enslaved Guardians and once they’re done he’ll have around 500 points.

To give the guys a bit of a rest, once Dave has finished his Enslaved Guardians, it’s probably time to take these units to the battlefield… so everyone can see they’ve actually chosen totally the wrong units and now need to paint up a load of new ones. Hopefully, if things go to plan we’ll be doing that shortly. In the meantime, here’s Dave’s fantastic Balefire Catapult. 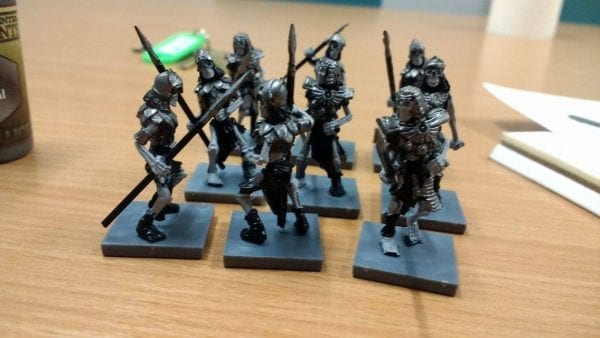 The detailing on Dave’s catapult is absolutely top notch. We can’t wait to see the full army on the table. Stay tuned to the blog some time in 2018…

Well, that’s it for this week folks. We’re going to have a couple of newcomers taking part in Hobby Time shortly, although we won’t spoil the surprise. In the meantime, we’d really love to see the army you’re preparing for the Summer Campaign. Send it over via Facebook or Twitter and we’ll share the pictures on the blog.