It’s the far future and mankind spreads across the stars like a cancer. Immense Corporations driven by greed invade, strip and sell whole planets or even entire systems to make their profits. Those who aren’t part of humanity’s realm are subsumed; those who resist are eradicated.

On the fringes of the Galactic Co-Prosperity Sphere, ancient empires, predating the dawn of mankind, drive the aggressive expansion back with their own far superior technology. Forge Fathers bring their devastating weaponry to bear, battling the GCPS for material wealth and resources. The elusive Asterians eliminate corporate vessels in the same way a botanist might trim back the errant growths of a plant, following their own mysterious agendas. Neither realm would risk open war with the GCPS, but they cannot allow humanity to proceed further. 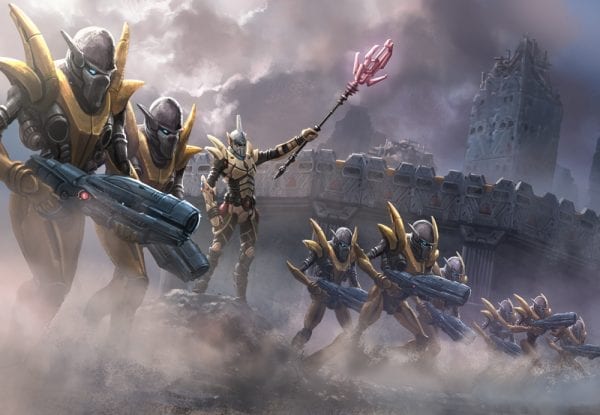 Worst still are those threats outside of civilised worlds. The Plague, a long forgotten deadly mutagen, burns across the stars. Although the GCPS’ ruthless Enforcers quarantine many infected worlds, many more slip the net as the monstrous victims of the Plague bring terror to the Outer Colonies. Meanwhile, the insidious Veer-Myn, who have long lived in the shadow of other races, have begun to rise up as one, streaming out of maintenance decks and mining facilities to take the worlds above for their own.

The battle lines are drawn and allegiances decided as the galaxy descends into war.

Welcome to the GCPS, Citizen. 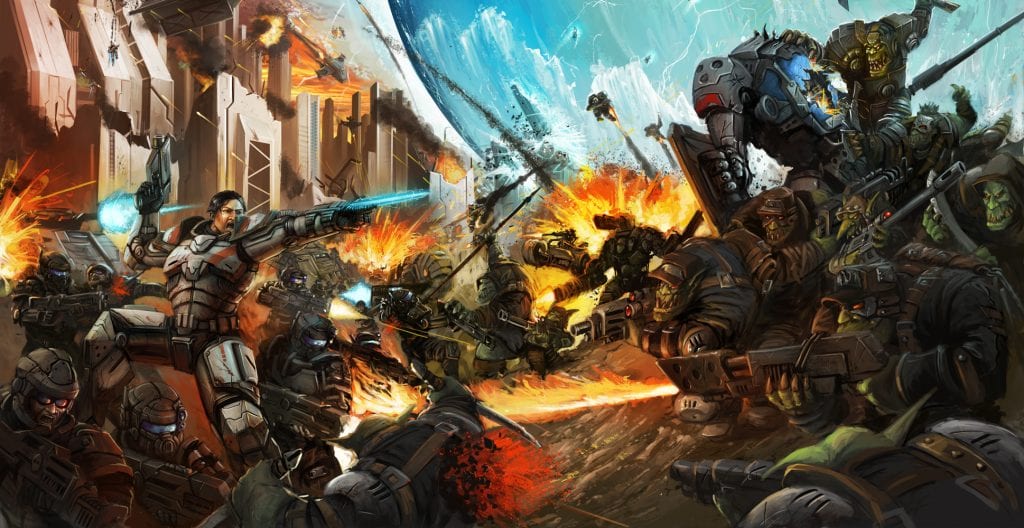 Warpath is the strategic, action-packed game of war in the far future. Take control of mighty armies, powerful vehicles, advanced infantry and heroic commanders as you fight across the tabletop to decide the fate of whole worlds. Fight apocalyptic scale battles with hundreds of miniatures on the tabletop or intense squad level skirmishes amongst the densely packed battlezones of the GCPS.

Set in the same universe as DreadBall and Deadzone, Warpath adds to an already rich universe, allowing you to escalate conflicts further and explore settings in all of their detail. Choose your side, assemble your army and take them to war.

The game is spread across two different rulesets; Warpath and Warpath Firefight. The share the same miniatures range, so any force can be easily transported from one game to another and back again.

Warpath is designed for big battles. The rules are streamlined for quick, tactical play, allowing you to control platoons of infantry and squadrons of vehicles in world ending conflicts. Like Kings of War, these games can be played in a short amount of time, so you can field as much as you want to and still expect to finish a game in an afternoon.

Warpath Firefight ‘zooms in’ on the action, where your force will consist of a a handful of well equipped squad and a couple of vehicles. Individual models are more important and can sway the outcome of a conflict. There’s more granularity as you have greater choice to customize your units and leaders, making individual heroes stand out more. The gameplay is still fast and tactical; as easy to pick up as any Mantic game. 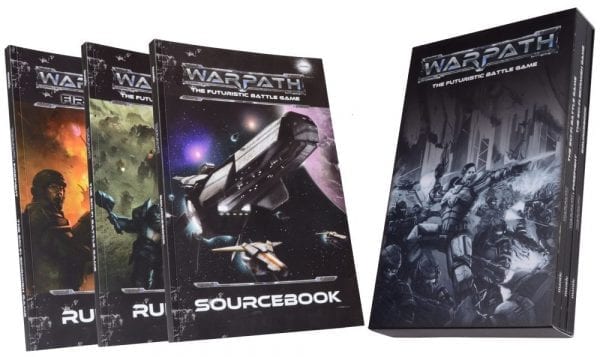 Both games use an innovative command system, which enables your commanders to coordinate troops to counter enemy assaults, while pulling off feints and inspired tactics of their own. Each commander can choose from a wide variety of orders, including a selection of faction specific commands for each races in the game.

Although these games are based around sizes, there’s no set way to play, Warpath works well at smaller scales for quick and exciting games and a dedicated crew and can play larger games of Firefight just as easily. Remember it’s about which game you would prefer playing, rather than being tied to one particular size.

Both Warpath and Firefight share miniatures with each other and with Deadzone. So if you already have a Deadzone Strike Team, you can easily add to them to build a Warpath force. All it takes is a few more infantry and maybe a vehicle. 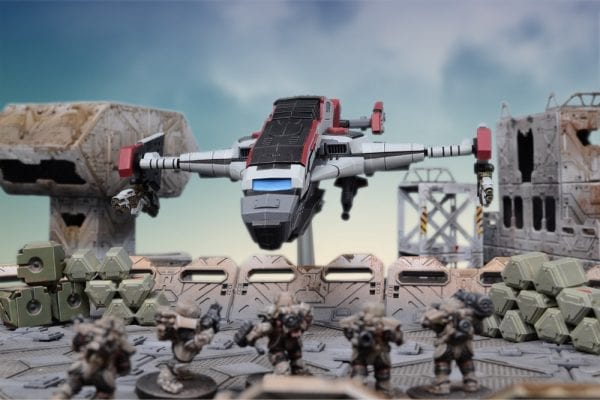 Warpath bring new vehicles into the fold, from the lumbering tanks of the Forge Fathers to the precise aircraft fielded by the Enforcers. Each kit comes with variants and weapon options, so you have no reason not to field many of these armoured constructs. In coming months the larger vehicles will become available, but there are already a number smaller armoured units available, like the Forge Father Iron Ancestor or GCPS Strider. 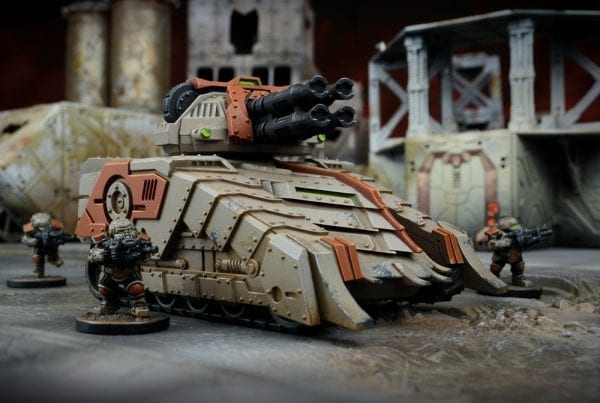 Any army will require boots on the ground. Warpath has wide variety of infantry available to use, from elite Enforcers, to monstrous Veer-Myn Nightmares. You can easily field vast hordes of miniatures to overwhelm your enemies with sheer umbers, or equally field only a few carefully selected specialist teams, who out-manoeuvre and eliminate foes with tactical precision. Warpath’s army creation is very open, so you can really choose to field almost any force you choose to.

There’s already a number of units available for the forces in Warpath, which you can either pick up through local retailers or the Mantic webstore, including:

We’ll be adding more specialists and vehicles to these, so you can upgrade and expand your armies. If you want to get started form scratch, we’ll be creating great value army set to launch your own crusade amongst the stars, as well as the Operation Heracles Two player set – perfect for getting started with Warpath or Firefight. Warpath has been a long time coming and we intend to support the game for many years to come with releases. 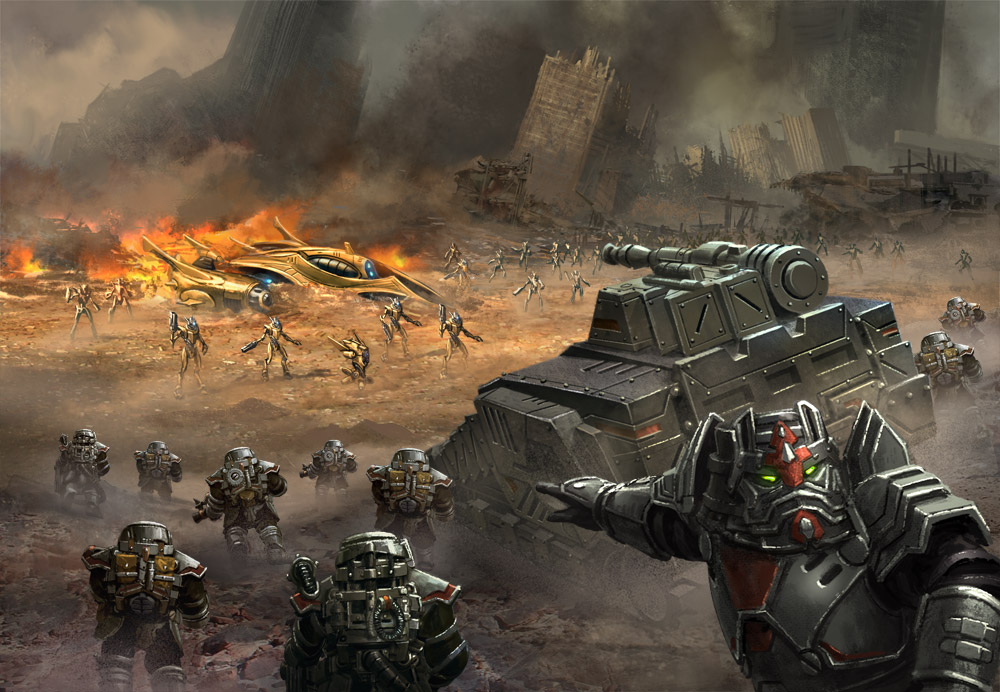 We’ll be going over the game in more detail here on the blog, on social media and on Warpath Universe, so stay tuned!

Can’t wait for the future? The first wave of Warpath releases, including Rulebooks, Command dice, Counters and Operation Heracles are available to pre-order now!