That’s right folks, it’s time for another exciting Deadzone: Third Edition blog. How are you coping so far? Quivering with constant excitement? Good, that’s the correct response to a game launch this monumental. So, what have we covered so far and what’s coming up?

Onto today’s blog and, we admit, it may not sound the most exciting but we felt it was an essential change to make sure Third Edition was as streamlined as possible. So pay attention you people sitting at the back!

Firstly, let’s talk about repetition. In Second Edition some words were used multiple times but had slightly different uses, e.g. the Fight stat and the Fight action. To make sure there’s no confusion in Third, we’ve amended some of the terminology to make sure there’s less repetition when it comes to key phrases, e.g. a Fight action is now an Assault action, while a Move action is now an Advance action. Simple enough but it just makes it clearer in the rules when we’re talking about a specific element.

Likewise you had terms like Heavy, which was used to describe an ability (Shoot actions counted as a long action but it was also a type of weapon. As a result, there was often an assumption that a heavy weapon (type) must have the Heavy ability. Similarly, Vehicle was an ability that affected all sorts of elements (like picking up items) but it was also a category of model. However, some ‘Vehicles’ like the Strider or Goliath didn’t have the Vehicle keyword, which could also be a bit bamboozling. In Third we’ve changed the category of model from Vehicle to Support – which seems more fitting when it could be used to describe a jetbike or a lumbering tentacled beasty.

Onto keywords/items now (which replace the previously named Abilities) and, once again, we just wanted to streamline the process when people are checking exactly what a keyword means and does. In Second Edition there were some odd instances were Items would tell you to check Abilities and Abilities would tell you to check an Item, e.g. the Shield Generator ability told you to check the Energy Shield item on a different page. Now the Energy Shield and Shield Generator are both listed under keywords.

Grenades were another offender in Second Edition. There are actually several types of grenade in the game: Frag, Smoke, Stun and Toxic Cloud. However, each had their own entry in the Items and all told you to refer back to the Grenade ability earlier in the book. Now these have all been collated under the Grenade description in the rulebook.

As you can hopefully see, these sort of changes don’t affect gameplay but they do reduce the amount of confusion when it comes to rules. There had been a certain amount of bloat over the years and with Third we’re able to condense everything down and make it easier than ever.

DEADZONE: THIRD EDITION IS AVAILABLE TO PRE-ORDER NOW FROM THE MANTIC WEBSITE OR YOUR FRIENDLY LOCAL GAME STORE. IT’S DUE FOR RELEASE FROM OCTOBER 25th. 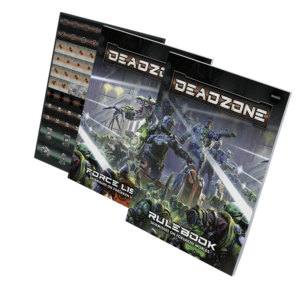