By now you should be aching with excitement for the release of Firefight! But what faction will you take command of in the vast Galactic Co-Prosperity Sphere? Today we’re finding out more about the GCPS.

Given the cutthroat nature of the GCPS, and the Council of Seven’s predilection for winners, it should not surprise anyone to learn that the most successful corporations in the galaxy, tend to also control the most powerful private armies. Private military forces are widespread. There are currently countless corporate citizens employed in the armed forces across the Five Spheres. 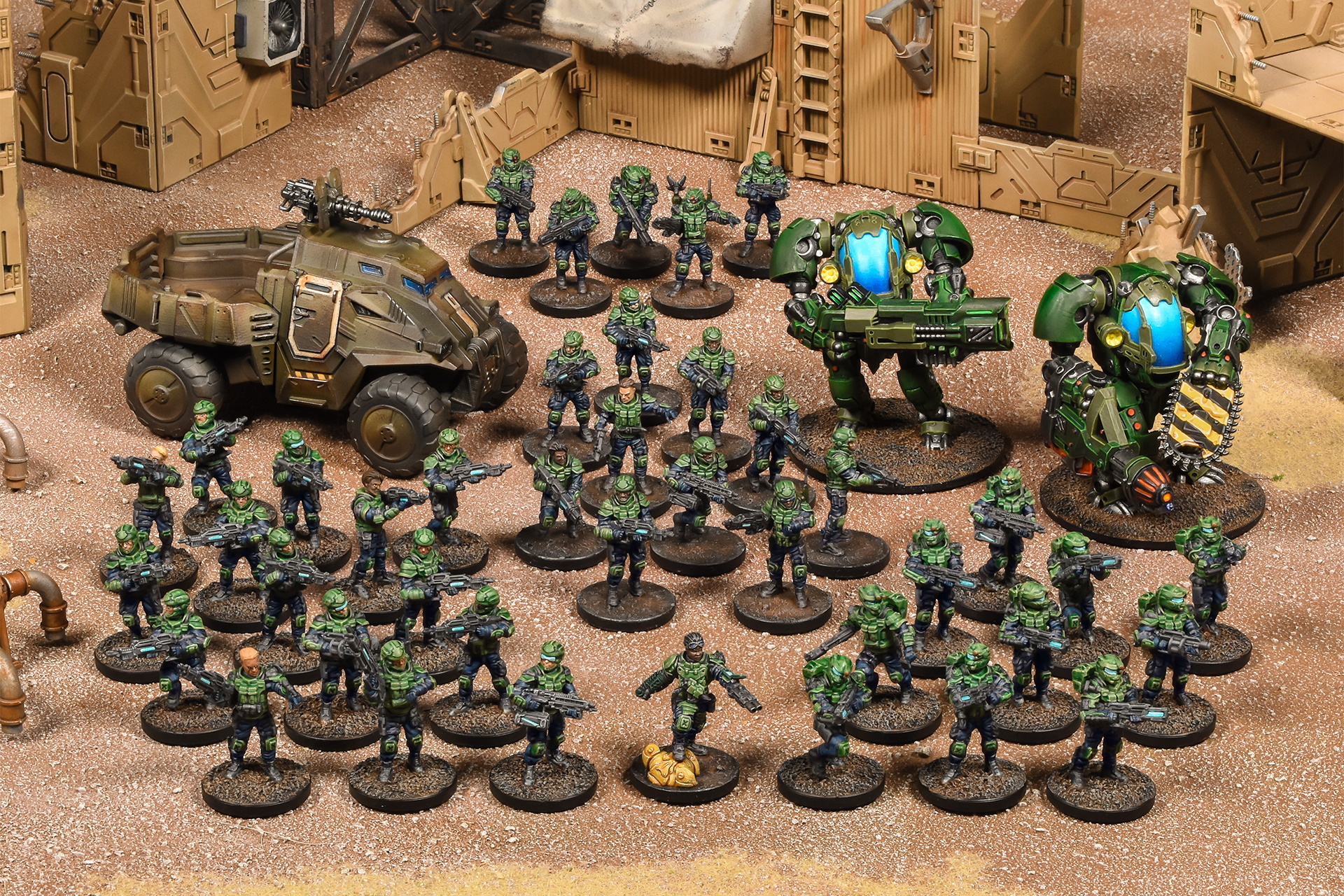 Long before the GCPS discovered the Marauders or began to develop the Enforcer corps, corporate marines were what and who secured the GCPS’s expansion across the universe. Corporations like Trontek, Reiker, and Accutek to this day employ more armed personnel than many of the nation states of Old Earth ever had under arms. Many of their battalions and regiments have long and distinguished histories and some carry standards marked with the names of battles fought and wars won centuries ago.

Wherever they come from, and whatever they look like, a typical marine will be equipped with a good suit of armourweave, a flexible but strong lattice, able to absorb and redirect energy directed against it, and a decent, if mass-produced laser rifle. They have strength in numbers, there is never a shortage of prospective recruits for lucrative military service and a way to get off the mid-Sphere and Fringe worlds. But this is not to say that corporations view their marines as nothing more than an expendable asset. A well-trained and battle-proven marine is viewed by most employers as something of an investment. Very few have anything to gain from sending wide-eyed innocents to the slaughter against almost uniformly dangerous foes and so most at least try to look after their troops.

It’s fun to play, as the… G.C.P.S.!!! Thanks Jonny for this ‘wonderful image’. Anyway, now we’ll hand over to Mark Robinson for the serious stuff. 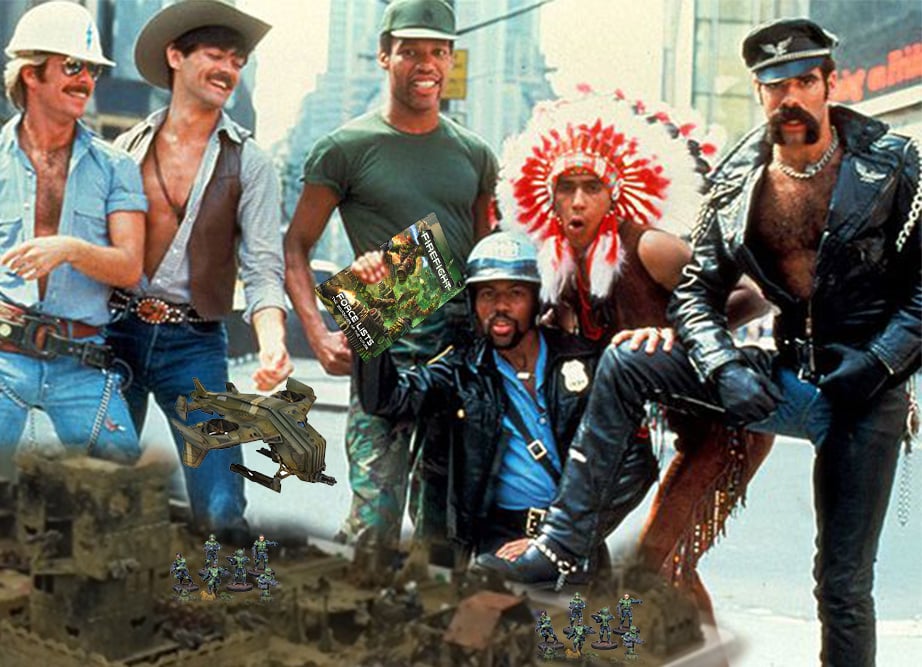 Although the myriad Corporations in the Galactic Co-Prosperity Sphere may all make their fortunes in very different ways, they all have one thing in common: a strong desire to protect their income. This is often done through the deployment of their own private armies, known collectively within Firefight as the ‘GCPS’.

Hundreds or even thousands of marines are employed/deployed to help ‘convince’ local populations to agree to incorporation. But I’m not here to debate whether the GCPS are the good guys, or whether they’re faceless, greedy, genocidal tyrants that will destroy a planet’s inhabitants if they even threaten to disrupt the bottom line. I’m here to talk about the grunts, the guys who get the job done! Would you like to know more?

Why would you want to take control of the GCPS forces? Most people’s perception is that they’re just a bunch of bog-standard marines who shoot lots and die lots. Aren’t they? Well, no, not really. Aside from the fantastic model range, the reason you play GCPS is for the challenge. They are a very tricky army to master, but that makes it all the more satisfying when you get it right (so I’m told). Yes, the army is mainly made up of marines, but there is an amazing variety of different troops and roles they fulfil, all of which need to be used correctly and decisively in order to achieve victory.

Whilst I’ll leave it for you to discover all the little tricks and combos in the GCPS force list, I will point out a few examples here to bear in mind. 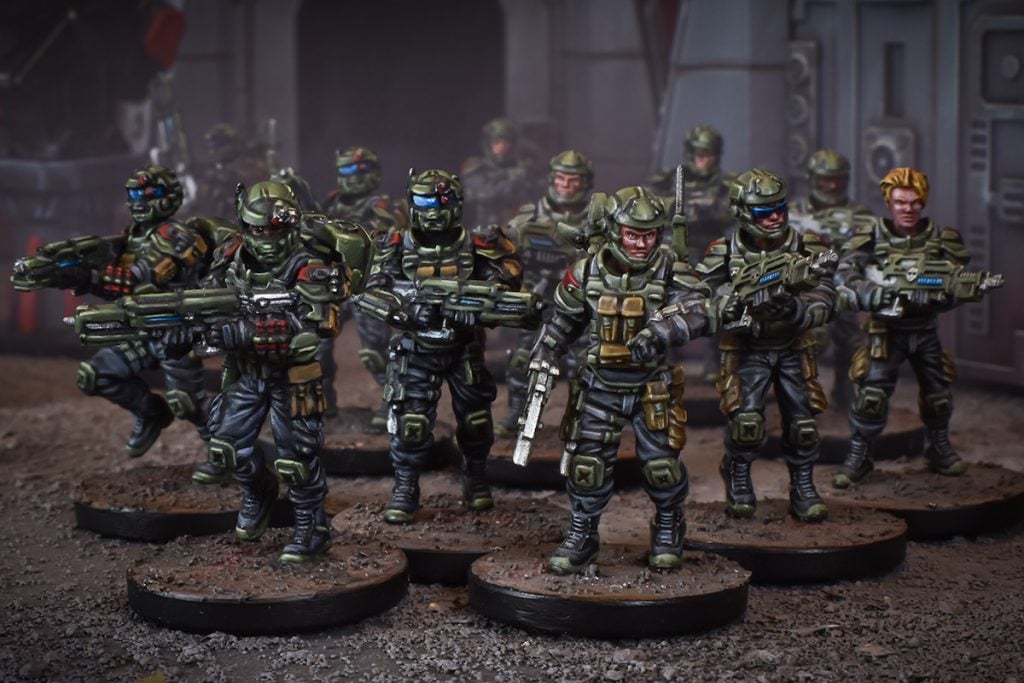 Your basic marine. You know ‘em, you love ‘em. The backbone of any good army. Take lots. Never underestimate the usefulness of 10 shoots, with 18” range, hitting on 5+ for just 100 points. Or, for a few more points you can have 20 Recruits! Although they hit on 6+, the combination of your Orders with these basic units makes them something your opponents will genuinely fear. Yes, these guys will die, but that does mean your other specialist stuff isn’t being dealt with (and, anyway… do they wanna live forever?).

As I mentioned, there is such a variety of options with the different types of marines. The Specialists section is a prime example of this. Tank Hunters do exactly what it says on the tin! Get them a charge on anything but the heaviest of armoured vehicles and there’s every chance it won’t be there to fight back. Snipers, Drones, Medics all fulfil crucial support roles on the battlefield. Meanwhile, get your Riot Troopers (a prime example of those awesome models!) within 6” of something and let them go to town! They’ll keep fighting… and they’ll win.

The GCPS is the epitome of a combined arms force in Firefight. Large units of infantry provide covering fire and/or act as fodder, with specific elite units in there to do the heavy lifting. Not only do you need to bring a wide variety of the infantry troops available, you have access to various different vehicles in various different forms. Take the Strider, for example. While your eyes are probably initially drawn to the range and destructive power of the Polaris Cannon (which admittedly is very tasty… so take two!), don’t discard the other three variants as they all fill a role when used correctly. The Urban Assault Strider hits exactly the same as the Enforcer’s equivalent for instance, but for less points. Although it doesn’t pack the same punch with it comes to shooting.

Last but not least, your commanders. They are cheap, and effective. When you’ve got enough in your list, squeeze in one more. Make sure to look after them though. It’s always a good idea to attach a couple of bodyguards, if you can afford it. Who am I kidding, of course you can afford it, you’re playing GCPS! Take the Major for instance, the ability to remove Pin markers is huge when you consider just how many of your units have Assault Reactions, something like that can be key when facing those Assault-heavy armies, so you can respond before they even get to you. 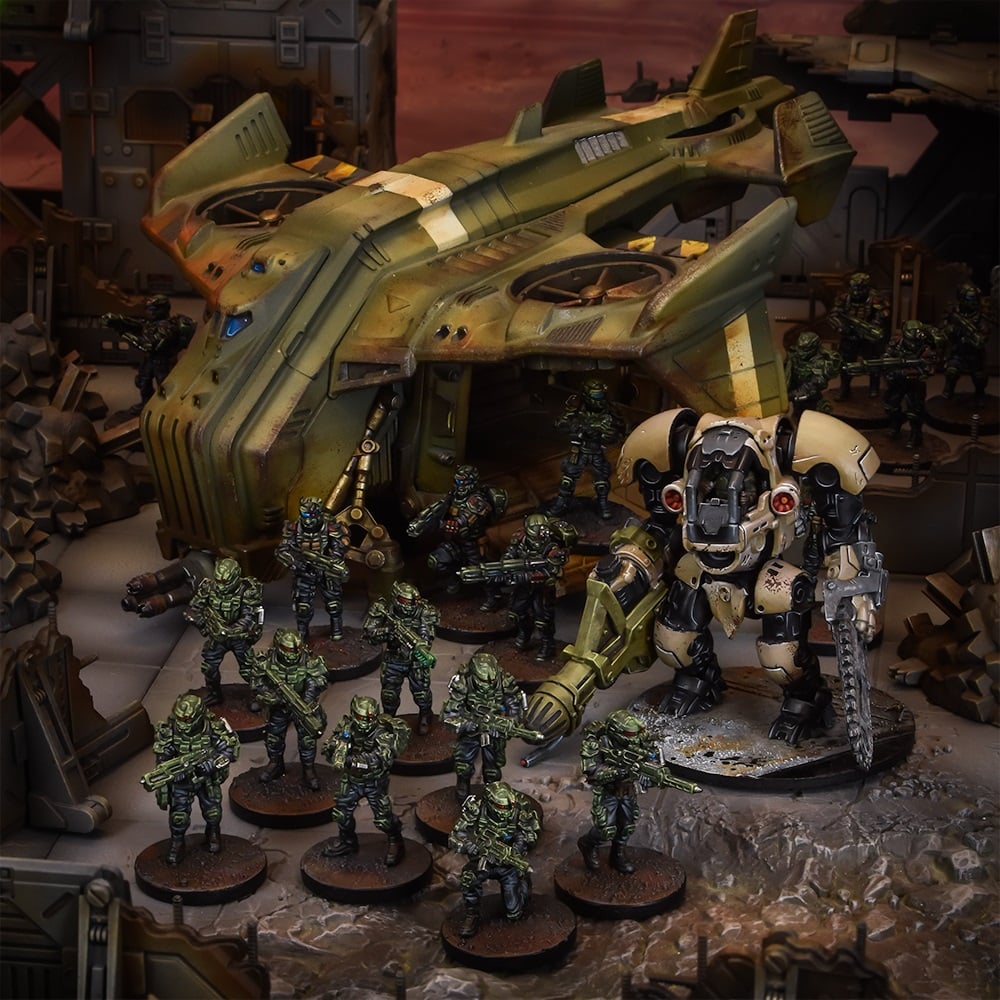 It may well take time to learn your army and work out how to get the most out of it. You have a lot of keywords to take advantage of and little tricks up your sleeve to pull out when the time is right. Remember to always play the mission though. Things in the list that may look trivial, such as extra movement Orders can prove to be vital in the final Rounds. It may be frustrating at first, but that just makes it all the sweeter when it clicks.

Now have fun. That’s an order.

The Mule is the ubiquitous vehicle of all armies across the GCPS. From verdant jungles to arid toxic wastelands – they have all felt the tread of the Mule’s tyres and the boots of the Marines they carry.

Heavy weapons are useless if they cannot be brought to bear on targets, or so the ancient axiom goes. For this reason, emplaced heavy weapon teams are commonly accompanied by elite rangers who highlight priority targets and suggest deployment zones and firing corridors for maximum kill counts.