Home > News > How to expand your Marauder Strike Force in Firefight

How to expand your Marauder Strike Force in Firefight

Are you struggling on how to expand your Marauder Strike Force in Firefight: Second Edition? Need some tips about what units are going to boost your chances of victory? Just can’t decide between X and Y? Well, we’ve got just the blog series for you.

In Firefight, the opportunity to confuse and surprise your opponent should never be passed up… and angry greenskins dropping in from the sky is certainly likely to confuse your opponents. Skyscrapers are the Marauders that are brave (or mad) enough to strap high-powered jet engines to their back and rain into combat. Thanks to the Aerial Deployment keyword, Skyscrapers can come in as Reserve troops, so you’ve got the potential to drop in behind enemy lines from the start of Round Two, until the end of Round Three.

In terms of weapon choices, the resin Skyscrapers are compatible with the hard plastic Marauders, so you can add elements like the flamer, HMG or missile launcher. The latter is particularly dangerous, as it has a range of 24”, so you can deploy right at the back of the battlefield, potentially, but still be withing range. Alternatively, drop in behind an enemy and quickly pin them or flame them, before they have the opportunity to respond.

The main concern is keeping them alive once you’ve dropped them in… but who cares if they take out a couple of enemy units before they explode into fireworks?

The Hulk – in a similar fashion to Deadzone – is a killing machine. Marauders can struggle a little with armour piercing in their list, but the Hulk makes up for that on its own. The HEW Cannon has a mighty range of 36”, with 2D and (here’s the kicker) AP5 with Anti-Tank. But that’s not all, the Hulk is a going to be hard to shift for your opponent, thanks to HP4 and Armour 6+, which is combined with Resilient (2).

The reason for choosing the Hulk over the Marauder Weapon Teams or Guntrack, which both also have a HEW Cannon, is that the Hulk doesn’t suffer from Slow Reload. The problem with Slow Reload is that it turns a Shoot action into a long action, so it can restrict your options. No worries about that with the Hulk! Even better, you can boost the unit with an additional Hulk for +60pts, just in case you need a little extra oomph.

So far we’ve covered the element of surprise, armour-piercing, and now we come to sheer staying power. While the Marauders may not have a Sturnhammer or Spectra, the Stuntbot is a good option for simply tying up the enemy in a potential slugfest. First up, you’ve got HP4, which is relatively juicy, but that’s backed up by 7+ Armour and the Heavy Armour keyword (so your opponent will have to re-roll damage hits and score a 5+ to actually cause wounds). All this means a unit is going to have to pump some serious fire damage into the Stuntbot to take it out. And while they’re distracted by that, they may not notice the Skyscrapers landing right behind them!

It’s not all rainbows and sunshine for the Stuntbot though, as it has fairly average Shoot and Assault stats of 5+. Thankfully the Assault can be mitigated for a little by charging into combat, which will boost it to 4+. Consider swapping out the Thermal Cannon for the Big Claw and focus purely on melee. You can burn them with the Auxiliary Flamer (to hopefully mark the unit as activated), then waltz in with the Big Claw before taking names and kicking ass. Plus, it’s a cool model, with great table presence. 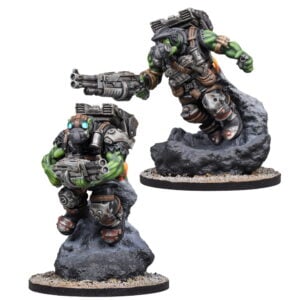 Although they’re not capable of true flight, the speed and manoeuvrability afforded by their jump packs make the Skyscrapers valued assault troops for Marauder generals. Few forces are prepared for the sudden impact and close range fire of a jet-propelled commando. 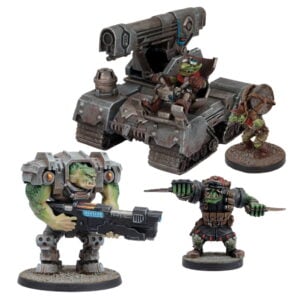 Hulks are genetically distinct from (though closely related to) the more common Orcs of Gora. The largest Hulks approach three meters in height and are deployed carrying the largest portable weapons in a warband’s armoury. Mobile artillery platforms have played an important role in supporting Marauder units almost since the beginning of Gora’s history with the GCPS. The ability to suppress an enemy gunline, has proved invaluable, giving assault units a chance to close and destroy enemies that by rights should have gunned them down with ease. 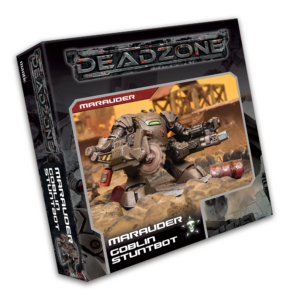 The Stuntbot’s capacity for destruction and thick armour makes piloting one a coveted job amongst Goblin fighters. Contents: 1 Resin Stuntbot with Thermal Cannon and Buzzsaw. Supplied unassembled and unpainted.