Hello and welcome back to Motivation Monday!

Today we speak to… Bob Point

I was born at a very young age and soon after started wargaming. All you had back then were twigs and pine cones foraged from the garden that you made into little twig soldiers and…well, I won’t bore you with the rest, but I’ve been doing this a very long time.

I’ve been a member of the Stoke Wargames Group for more than 30 years and played everything from historical games set in biblical times through to spaceship battles. I’m a complete wargaming nerd and have a collection that runs into the many thousands of figures from every period of history, plus fantasy, science fiction and lots more besides.

I’ve been with Mantic since day 1! I enthusiastically bought the first box of Elves and can remember those first blog posts that Ronnie wrote announcing his plans for more models to come and I was hooked from there. I loved them for their almost ‘alien’ look which was very different to any other Elves that were on the market at the time. 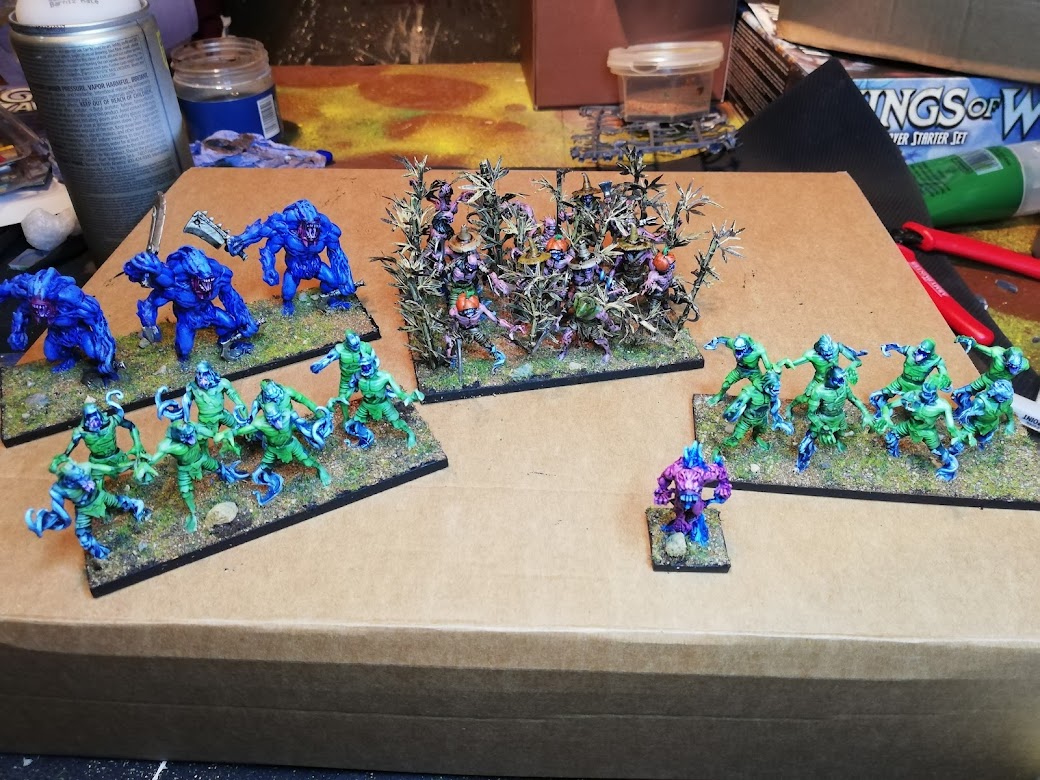 All of them! I own every game that Mantic has ever produced, from the original Dwarf King’s Hold, to Project Pandora, through to Overdrive and Deadzone 3rd edition. I’ve loved them all to be honest, but if I was to pick a favourite, it would probably be….aaarrgghhh it’s so hard! Each game has given me so many hours of enjoyment with friends both near and far.

Okay, the one that is nearest and dearest to my heart is actually Dungeon Saga! I was massively into role-playing games in my youth and Dungeon Saga reminds me so much of taking a group of friends through a devilishly tricky underground lair, springing traps on them at every turn and throwing evil and menacing creatures at them if they took a wrong turn. Sometimes when they took a right turn too! I always play as the Overlord and enjoy the challenge of using the resources at hand to foil the party’s plans, whilst still ensuring everyone enjoys themselves. It’s a game you can play with little set up and is different every time you play.

I have all of the expansions, which comes in very handy when you consider just how many figures you get in each one! For instance, I have used the orcs out of the Warlord of Galahir expansion in games of Vanguard before now. In a similar vein, Star Saga is right up their with Dungeon Saga for the same reasons, but the fantasy version just about wins out because it’s also the first game that my daughter, Ava played with me when she was 7. She’s now 11, and still puts up with her dad begging her to play games with him, but less frequently now! 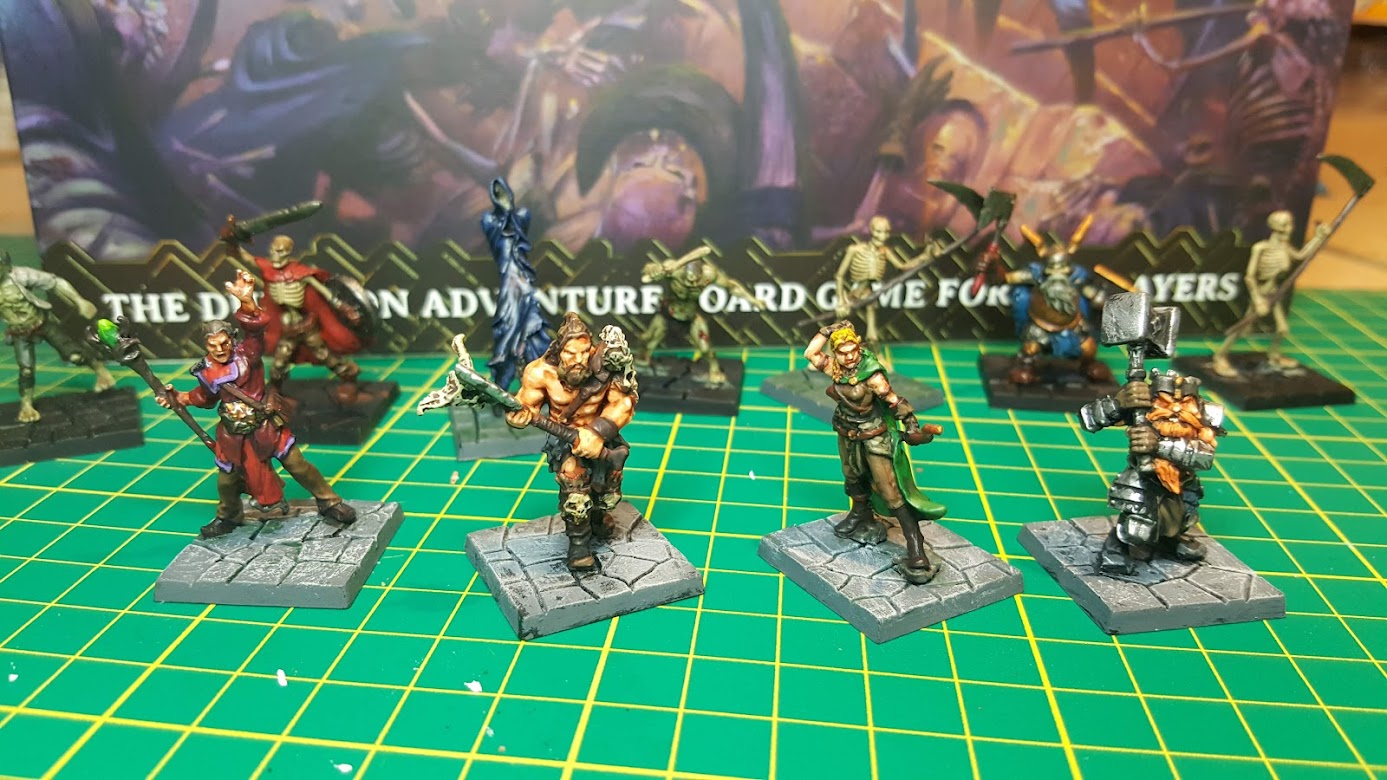 I’ll cheat a bit here. The two games I play most often are Kings of War and Deadzone, so I’ll give you one of each. Orcs have always been my favourite race in whatever game I have played, mainly because there is very little subtlety in how you use them. I have one tactic in any game I play: CHARGE! So orcs are naturally my favourite in Kings of War. I still miss Orcy’s contributions to the Mantic blog to this day*. I am currently building an army for them, having bought a mega army way back in 2014 at an Open Day. For some reason I never got around to building them before now, but they are my priority now. I have written a short story to fit the army which has them raiding a small town in the Successor Kingdoms. I’m using bits of Terrain Crate on the bases to show them jumping over market stalls and bashing down doors. I’m sure I’ll still lose most games I play, but I think it will look cool when it’s done. 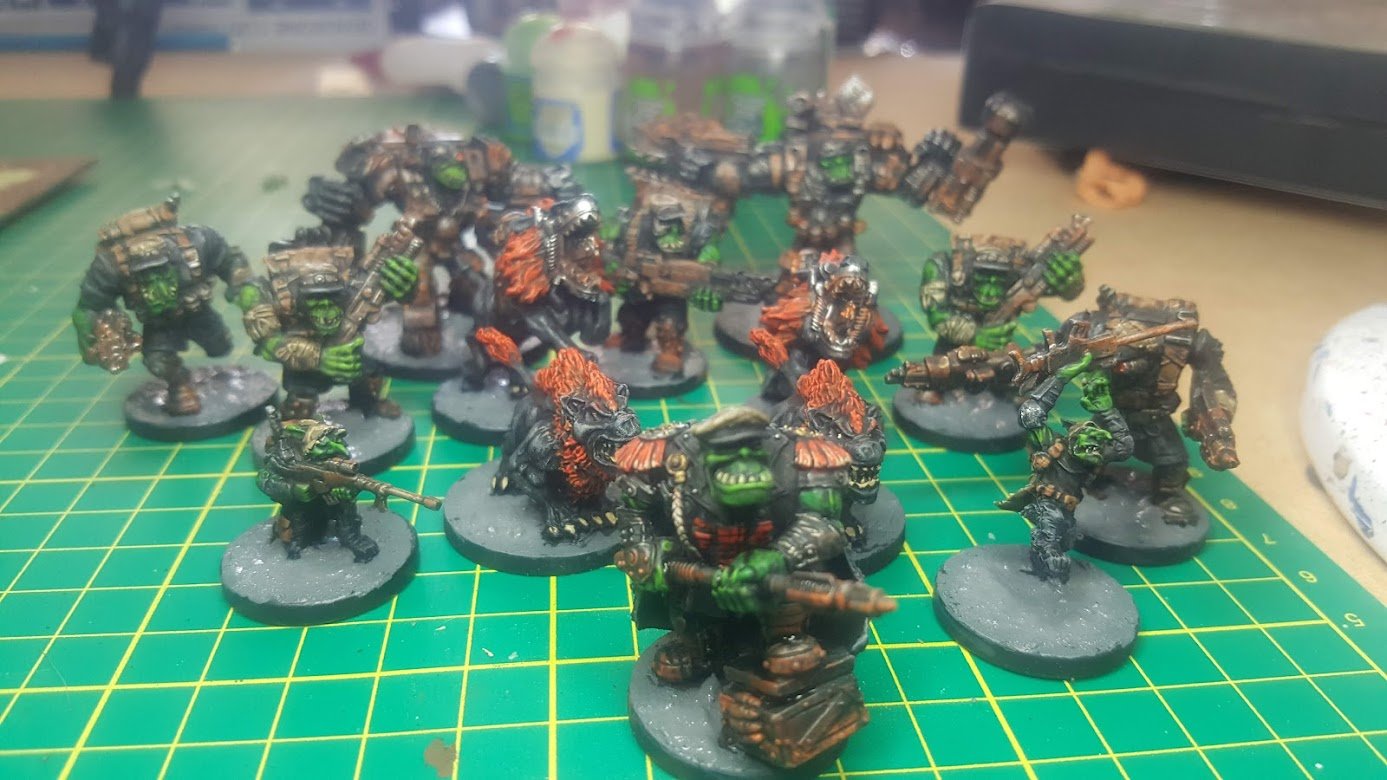 For Deadzone, it has to be the Marauders! For the same reasons above, they just look amazing with their ridiculous Ripper Suits, Mawbeasts and with 3rd edition, we now know what the Commando Captain is armed with… shock baton for the win! With the prospect of hard plastics coming this year, they are a faction I’ll be building on and looking to use in Firefight and Warpath as soon as possible.

I still think that the Stage 1 Plague Lord from the original version of Deadzone takes some beating. It’s such an iconic model and looks so menacing on the board.

The hobby desk is always a smorgasbord of projects either just started, half way through or near to completion. I’m not a great painter, but I enjoy it and find it a great way to relax away from the stresses and strains of the real world. So currently I have a Matsudan DreadBall team on the go. We are about to start season 3 of the Stoke club’s DreadBall league. Last season I played the Neobots and failed to win a single game. I’m hoping the honourable Matsudan will help me change that this time.

I’ve also got a Kings of War Elf army on the go. I’ve gone for a Northern Kin feel to them using snow covered bases. I’m always tinkering with how I want them to look and trying to come up with some new ideas to make them stand out a bit more, so they are a bit of a slow burn project. On top of those I’m still painting miniatures from the Hellboy board game and the Walking Dead All out War game. They are great palette cleansers. If you’ve just finished a horde of figures for Kings of War, it’s lovely to get out a couple of characters or walkers to smash out in a single session. 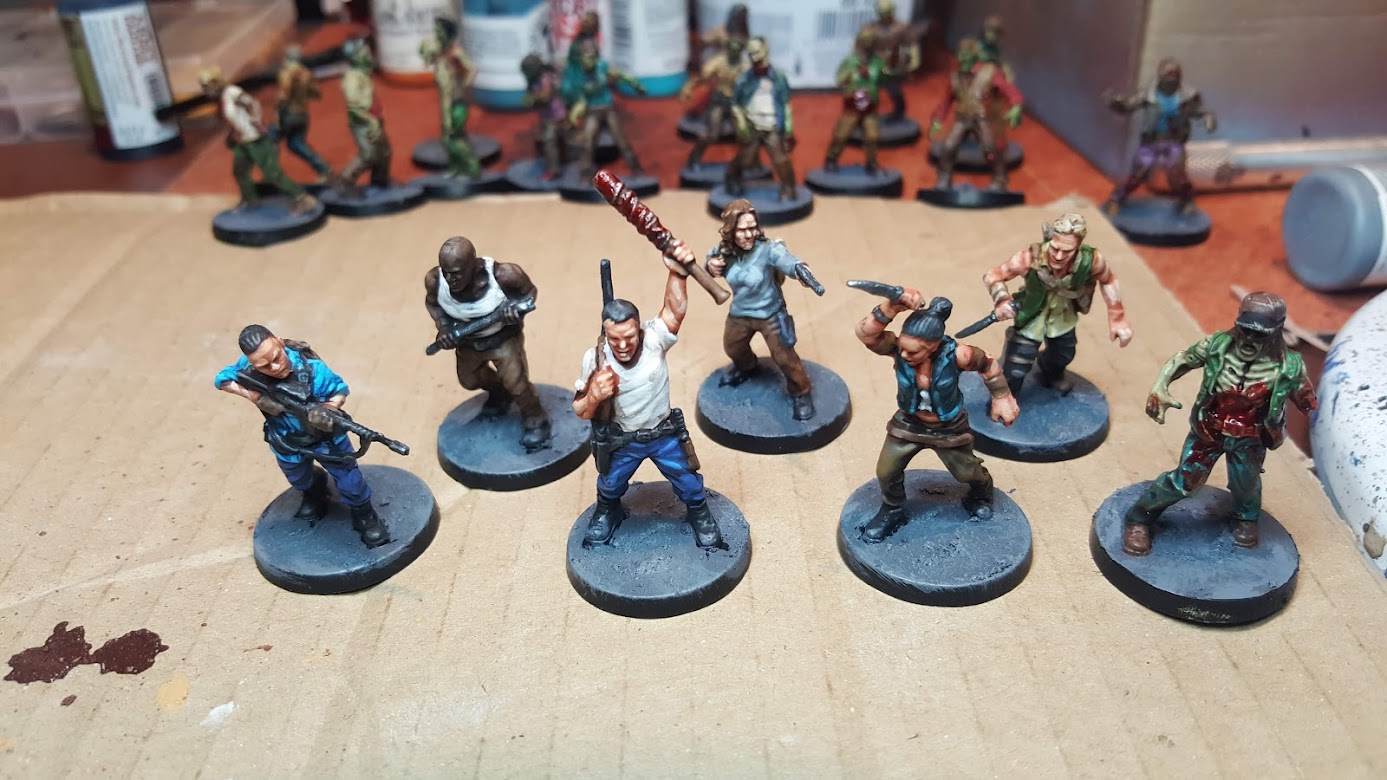 As I’ve mentioned above, the orcs are my big hobby project for the first month or so of 2022. I’ve got just about all the figures I need for the moment. But I’m also about to start on my Overdrive figures for an upcoming event.

I’d just like to publicly thank Mantic Games and all who work there for their continued passion and drive to keep producing such amazing games and models for us all to play with. I have just started a Mantic-themed podcast to fill the void of Weight of Fire and Frantic Gamers. It’s called Play Nice Radio and so far we have spoken with Kyle Przelenski from Mantic Trade Sales in episode 2 and have just recorded episode 3 with Andy Sharp and Ian Davies talking about Deadzone. Who knows, we might even persuade* a certain Marketing Content Creator and ex warehouse Goblin to come on the show and talk about what he does! [Ed’s note: I hear he’ll do anything for cheese or Yorkshire puddings…]

Thanks Bob, a brilliant read about ALL your Mantic passions.

Check back next Monday for another instalment.

*oh and Orcy? I’ll try find him soon as I’ve finished my bowl of crisps… 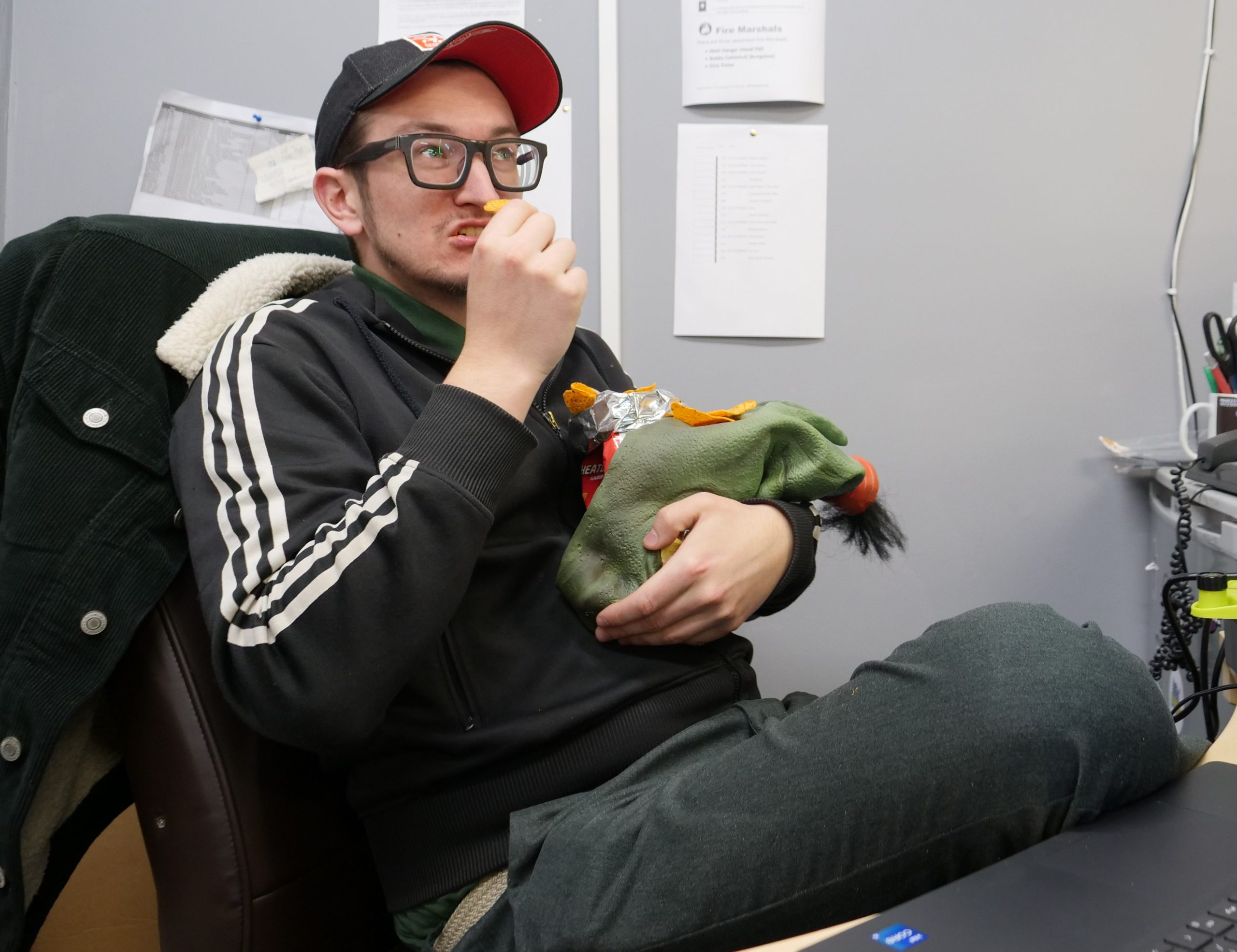 Dungeon Saga: The Dwarf King’s Quest is the Classic Dungeon Crawler of Swords and Sorcery. Embark on a fantasy adventure for up to 5 players in the Dungeon Saga board game! With highly detailed game-pieces and learn-as-you-play rules, this set contains everything you need to transform your table-top into a magical world of heroes and monsters.

All Out War is a game of fast-paced, head-to-head skirmishes in the world of The Walking Dead. Assemble a group of your favorite characters from best-selling comic series, kit them out with a variety of weapons, items and abilities, and battle to achieve dominance in the Walker-strewn Atlanta cityscape. Experience first-hand the desperate struggle for survival faced by Rick and his companions as you negotiate constant threats from both the living and the dead. This is gaming as it should be – fast, furious and fun!